Victorians rushing to return home before the state's border closes to NSW spent hours in traffic jams that reportedly stretched as long as 40km from border checkpoints. 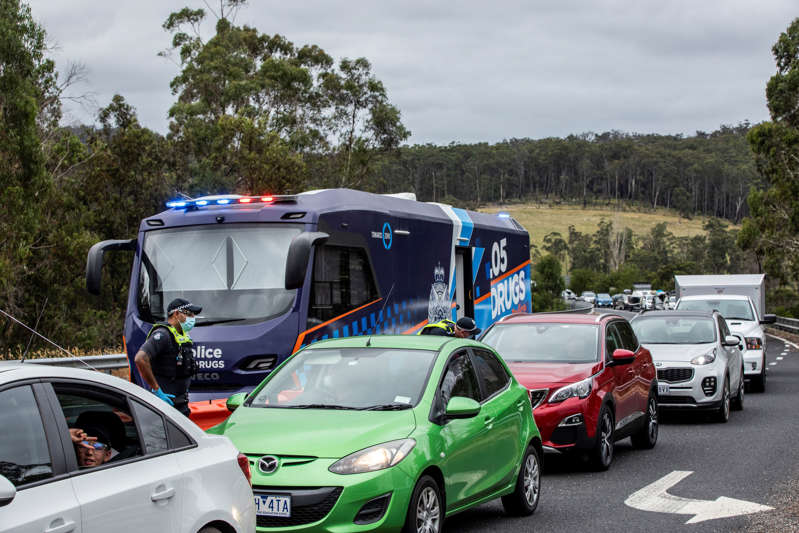 Police officers patrol and check for entry permits to Victoria at a border checkpoint on December 31, 2020, in Mallacoota, Australia.

About 3.30 pm on Thursday, the Victorian government announced the border would close to all Victorians, irrespective of where they had been in NSW, from 11.59 pm on New Year's Day.

The border closed for Victorians who had been in the Wollongong or Blue Mountains areas at 11.59 pm on New Year's Eve, and Victorians in hotspots were already banned from re-entering the state.

The border closure prompted thousands of Victorians on summer trips to NSW to flood back to Victoria, causing bottlenecks at checkpoints that had been set up across the border.

Readers who wrote to The Age and Sydney Morning Herald said they moved at snail's pace as cars rushed to the border en masse, sometimes on single-lane highways.

Social media posts from holidaymakers returning to Victoria reported delays of up to six hours.

Mark Bernhard wrote: "Took six hours last night, from joining the queue at 10 pm to get through the crossing at Genoa. An absolute debacle, but the police doing an exceptional job. Who signed off on the logistics and have they learned any lessons? Do they care about the inconvenience and ruined holidays with hours' notice?"

Andrew Grange said he "joined the traffic on the Cobb highway 3km from the Echuca bridge and moved 100metres in an hour. A number of people are out [of their cars] walking their dogs."

Chelsea Dabner said "a friend of mine is 20 km from Genoa border and the line is not moving. They are trying to get across by midnight."

Jessica said the border controls were not what her friends expected after they drove back from NSW without being questioned about movements, having carefully avoided hotspots.

"How is this going to stop people who won't tell the truth about where they have been? Another friend wasn't even stopped, just waved through at the border."

The border troubles caused an influx of calls to the Victorian Health Department's hotline. The department said in a tweet late on Thursday that it understood the situation was stressful and directed people to a website with information about the border.

"We encourage those with non-urgent queries to call back at another time," the tweet said.

Anyone who enters Victoria from NSW must now get tested and isolate for two weeks at their home.

Health Minister Martin Foley warned on Thursday morning - before the government announced the "hard" border closure - that Victorians currently in NSW needed to return immediately if they wanted to be able to return home.

The Victorian outbreak is likely to have been set in motion by Victorian who had returned from NSW and dined at a Thai restaurant with others on December 21.

"You do not want to be caught on the wrong side of a rapidly evolving situation," Mr. Foley said.

"This is a very serious situation. Victorians who have sacrificed so much are not going to go back to a situation where we faced what we did in the past winter."

Rules will soon be announced by the state government to allow travel across the border by residents of border communities and arrangements for freight will remain in place.

Albury councilor Murray King told Nine News on Thursday he hoped "both the Acting Premier of Victoria and the Premier of NSW realise the impact these decisions have on local people and the way they do business."