The fall of Kabul to the Taliban proves the days of US global dominance are over. And Australia must now question where its loyalties lie. 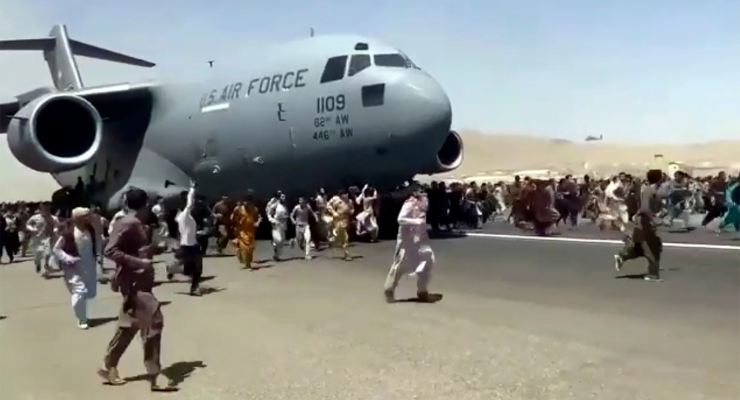 After two decades of occupation and several more of interventionist meddling, the West’s mission to rebuild Afghanistan in its own image ended as it always would.

For the United States’ great imperial war machine, it is with a humiliating moral, military and strategic failure. America built and armed the Taliban, invaded to remove the Taliban, failed to weed out the Taliban, and finally surrendered Afghanistan to the Taliban.

For Afghans, it ends with a terrifying future and abject dejection at being abandoned by the West.

And for Australia, it should end with recriminations and a gnawing sense of uncertainty. For decades we conducted our strategic policy under the dogmatic belief that the uncontested American empire would last forever. But the fall of Kabul proves those days are over — leaving a more volatile world.

Kabul was surrendered even before the final US troops left Afghanistan. Days before, US officials were talking up the possibility of the city holding out.

“This is manifestly not Saigon,” Secretary of State Anthony Blinken said, even when faced with eerily similar footage of Black Hawk helicopters fleeing the wreckage of another American failure.

Failure was how the Afghanistan experiment was always going to end, says Professor Hugh White from the strategic and defence studies centre at the Australian National University, who warned of this in 2005 when the invasion turned into a kind of nation-building exercise.

“The proposition that with armed forces and a few aid workers that you could fundamentally transform the politics of a new country is misguided,” he said.

For years it’s been clear that Afghanistan was a big, expensive failure, increasingly poisonous among a domestic electorate fed up with the “forever war”.

“There’s a deep bipartisanship outside the beltway that bearing the costs and risks of global empire isn’t something America’s prepared to do anymore,” White said.

The reality was US President Joe Biden had to get out of Afghanistan. But the administration’s rushed butchering of the withdrawal is revealing of the mistakes that haunted the mission for decades.

“What we’ve seen in the last few days is really compelling proof the Americans were holding up a pack of cards,” ANU Professor John Blaxland, an international security and intelligence studies expert, says.

“All the money, training, support, encouragement, and they’re bowled over by a medieval force virtually a fraction of their size.”

To the US, Afghanistan was a distant, messy conflict which its military top brass and politicians lost the will to fight. For the Taliban, it was existential. The US, once again, underestimated them, and Afghanistan will pay the price.

The end of primacy

The invasion of Afghanistan began in another era. Basking in the post-Cold War afterglow, and blinded by Bush-era neocon hubris, the US blundered into two wars in the Middle East — because that’s what empires do.

Those wars were very costly distractions. The US pumped trillions into military failures, and while America and its allies looked the other way, China prospered and began to flex its military muscle.

The US now realises the seriousness of the strategic tussle with Russia and China to come. On the one hand, disentanglement from Afghanistan frees Biden to commit to Barack Obama’s promised “pivot” to Asia. On the other hand, the fall of Kabul will fill Beijing and Moscow with glee, Blaxland says.

“It warms the cockles of their heart,” he said. “It is really just schadenfreude.”

Kabul marks a clear end to the moment of post-Cold War American primacy which created the ideological conditions for the invasions of Afghanistan and Iraq. Looking ahead though, it also gives China a clearer measure of America’s strategic competence — and appetite for conflict.

“If America wasn’t prepared to stomach the Taliban, how could it stomach a conflict over Taiwan?” White said. “That will embolden China, and make it more likely Biden will find himself in the situation room late one night wondering whether he should commit American forces to Taiwan.”

Australia in the middle

Antagonised by trade sanctions and caught in a diplomatic race to the bottom with Beijing, Australia has already had a taste of what an emboldened China and a weakened, disengaged America might make the world look like. But like the US defeat in Afghanistan, that world has always been inevitable. To prepare for it Australia needs to start asking hard questions about the viability of American power in the region, and the strength of our alliance.

Afghanistan should give us pause to reflect. Instead, White characterises Prime Minister Scott Morrison’s claim that Australia fought to “defend freedom” as “shockingly glib”.

We didn’t send troops to Afghanistan to fight for freedom, but out of deference to the US alliance. But our deference was so obsequious, we never questioned what we were doing in Afghanistan — sending young men to die for an endless war with no endgame.

“We sacrificed numbers of young Australians, as well as spending huge amounts of money on operations that weren’t going to achieve their objectives. We need to ask what went wrong.”

Australia’s strategic policy has always proceeded on the assumption that American dominance would last forever. It is now forced to confront a new world where that looks like a false promise.

But as long as Australia is guided by the same convictions that led it down the Afghanistan rabbit hole, it won’t be ready for it.