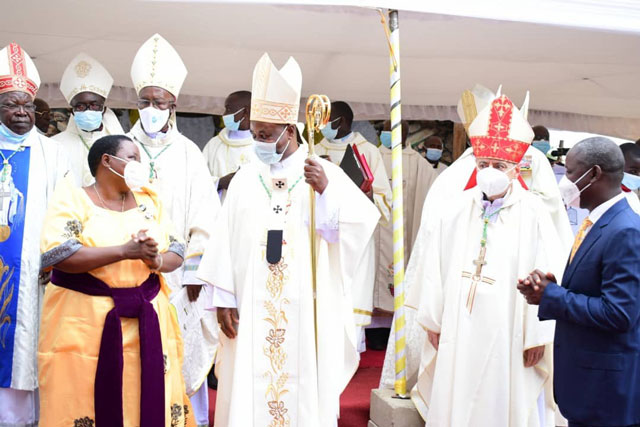 Mbarara Archdiocese marked Diocesan Day on Saturday by bidding farewell and celebrating 50 years of Priesthood of Archbishop Emeritus Paul Bakyenga, as they welcomed the installation of Archbishop Lambert Bainomugisha.

Prime Minister Robinah Nabbanja represented President Yoweri Museveni at the function. He contributed sh160million to the diocese as they launched the Nyamitanga Cathedral renovation and construction of the Archbishop’s house.

The symbol gives the Archbishop communion with the holy father the Pope.  The Pallium is a woolen vestment consisting of a narrow circular band placed around the shoulders with a short lappet hanging from front and back.

Most Rev. Bainomugisha was appointed the Archbishop of Mbarara Archdiocese in 2020 replacing Emeritus Paul Bakyenga. He was installed in June 2020 in a ceremony that was attended by a few congregations due to the Covid-19 pandemic.

The delivery of the pallium from Rome was delayed by the outbreak of Covid-19.

Speaking after receiving the symbol, Archbishop Lambert said God chooses a person to go and serve in any capacity noting that they should not be negligent and forgetful but stand by their vocations.

Moses Akampa a Christian expressed excitement that his Archbishop had received the symbol to fully serve God’s people.

Rev Charles Mutabaruka the Mbarara Archdiocese Public Relations Officer said apart from the letter of appointment, a pallium is the only visible symbol that shows his sharing in the ministry of the holy father in the universal church from the pope to the region he serves.

He says it symbolizes the role of the chief shepherd caring for the flock as symbolized by Christ carrying a sheep over his shoulders.