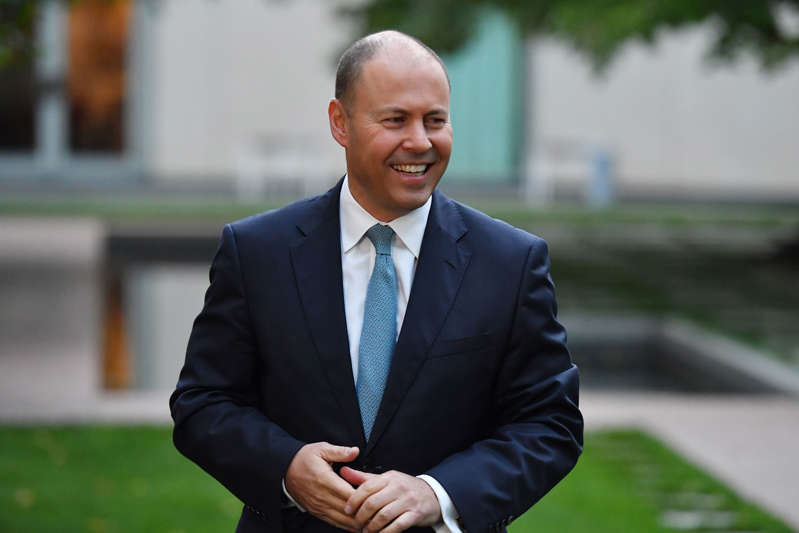 Treasurer Josh Frydenberg during a television live cross at Parliament House on March 16, 2021, in Canberra, Australia.

More than 100,000 Australians came off income support last month despite the withdrawal of the $90 billion JobKeeper wage subsidy program at the end of March, Treasurer Josh Frydenberg said, arguing it showed the economy was more resilient than some believed.

But in a wide-ranging interview with the ABC ahead of Tuesday's federal budget, Mr. Frydenberg said the economic recovery was not yet secured, saying the pandemic brought its own unique uncertainties.

He said the budget would see billions of dollars extra directed at aged care, childcare, disability, and mental health in long-term "structural spends".

The Treasurer indicated unemployment — currently 5.6 percent — would return to pre-pandemic levels within the next year.

"Well, 105,000 people have come off income support in the month of April since JobKeeper ended," he said.

"You may remember our political opponent said that the sky would fall in if we end JobKeeper after a year — bearing in mind initially it was a six-month program which we extended for another six months.

"We have a historic opportunity to drive the unemployment rate even lower back to where it was pre-pandemic, and even lower still, and if you compare the labour market's response to this recession compared to the '80s and '90s recession, unemployment has come back a lot faster."

But despite the better-than-expected economic figures, Mr. Frydenberg said "the job is not done".

"This budget will emphasise that we're still in the middle of a pandemic, and we need to secure the economic recovery, that's our focus, and there's a lot of work, a lot of work still to do," he said.

Billions for aged care in the budget

Aged care will be a key feature in the budget, with billions more to be directed at increasing home care packages and building the workforce.

"More than $10 billion over the forward estimates will be in this budget in terms of aged care spending," he said.

"We've had a royal commission, which is indicated that the sector is in dire need of reform, and additional funding, and we'll be responding to that royal commission report in this budget."

Mr. Frydenberg said the budget — his third as Treasurer — would assume international borders would open next year.

In October's budget, Treasury had assumed that the international border would open this year.

"This is showing you how fluid the economic situation is with respect to the virus. But we have an assumption based on the borders opening. It's in 2022.

"That's the momentum we have to continue in this budget all about securing that economic recovery and keeping Australians safe."

'It doesn't mean that the recovery can't be better.

The federal opposition welcomed the more positive economic news but warned the government not to use it as an excuse to avoid broad economic support.

"Even if the recession wasn't as bad as many economists feared, it doesn't mean that the recovery can't be better," shadow treasurer Jim Chalmers told the ABC's Insiders.

"The economy would be recovering more strongly were it not for the vaccines debacle and other mistakes that the government has made, and the budget would be in better condition if it wasn't riddled with rorts and weighed down with waste."

Mr. Chalmers said he wanted to see detailed costings about how the vaccine rollout and management of the quarantine program had affected the budget numbers, even though it was unlikely the government would seek to include such detail.

He argued there needed to be a "big investment" in the aged care sector.

"We can't have the situation in aged care where older people have maggots in wounds and being left malnourished," Mr Chalmers said.

"There is a big task for the budget, and we will respond to what the government does in due course."