As a former nurse, Nang Thiri Thaw tried her best to give her son medical advice when he tested positive for COVID-19 in Myanmar.

She video-called him from Sydney every day, but he couldn't get the care he needed.

"Until the last minute I was with him," she said.

"He took his last breath in front of my eyes."

Ms. Nang said her eldest son Khun Zaw Pyae Sone, 44, was a much-loved music teacher who spent his time volunteering with people struggling with addiction and at bible studies.

He is survived by his wife and his eight-year-old son.

Ms. Nang is just one among many in the Myanmar community in Australia mourning from afar after losing relatives to Myanmar's disastrous third wave of COVID-19, fuelled by the Delta variant.

Deborah Tin, a piano teacher in Australia, said many in her inner circle had died of COVID-19, including her aunt.

She said her aunt had tried to go to a hospital in Taungoo, but she was not able to get a bed.

"My heart's been very broken, because of the helpless situation," she said. Their grief is only deepened by the belief that if it weren't for a military coup staged six months ago, and the subsequent collapse of the health system, their family members might still be alive.

"If the government and health system was the same as before, I think he would have survived," Ms. Nang said.

"It hits you. Words can't describe it."

Fears half of the population could become infected

For the past month, thousands of new infections are recorded in the country every day, but doctors say the numbers are severely underreported, and only deaths at medical facilities are counted in the official toll.

Myanmar has officially recorded 365,000 cases and almost 14,000 deaths since the beginning of the pandemic.

More than 1,000 people have been killed by the military junta since the coup, according to the Assistance Association for Political Prisoners.

Doctors were among the first to protest against the military takeover on February 1, and the military has been accused of arresting medical workers and hoarding oxygen.

Steven Htut, a Christian pastor who said he was given political asylum in Australia after working as a driver for a foreign journalist in the 1990s, said he hadn't come across any Burmese person in Australia who hadn't been impacted by the loss of a loved one.

"People are dying needlessly," he said.

"This is how Burmese people wake up today in Australia … we look at our Facebook, and we write condolence messages for our friends and family in Burma. Ms. Sarkis says there is no proper government in Myanmar to take care of the people.

"My news feed is filled up with so many family and friends leaving their loved ones, and so many condolences that I have to offer," she said.

She told the ABC she is distressed by photos circulating online of bodies at crematoriums and said the country has gone "from disaster to disaster".

"How on earth could this happen? I never heard of such inhumane acts [that] the military is doing to its own people," she said.

"The military leader is using the pandemic against our people as a bioweapon."

Distrust of junta and the scramble for oxygen 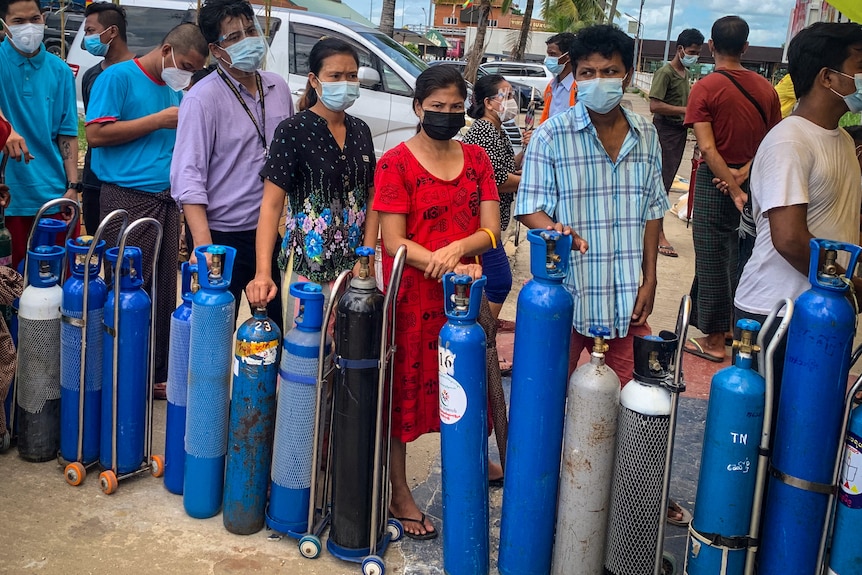 People in Australia have been trying to get oxygen to their relatives in Myanmar.

Mr. Htut said there was a deep distrust of the military.

"I believe the military is using this to control people because they do not want people to come out and protest," he said.

"They want 100 percent ironclad control … either fear of death or fear of them."

Mr. Htut said he needed to reach out to his cousin's husband – who worked at an oxygen factory – to try and help a sick relative. Steven Htut and his wife have lost close relatives to COVID-19 in Myanmar.

He said his cousin came to his aid, even after the military had already warned him not to supply oxygen to people lining up on the street, saying it could spread the virus.

"I lost contact with them for so many years … but I called, and they helped," he said.

"At the time he helped me, he already got infected and was already sick.

"He died and I didn't have a chance to say thank you in person. You know, it breaks my heart thinking about that."

Another personal loss was the death of a close friend and mentor, who stepped in to officiate Mr. Htut's wedding to his wife at the last minute.

"I'll never forget that," he said.

Paul Komesaroff, a professor of medicine at Monash University and a board member of the Australia Myanmar Institute, said there is no doubt the number of cases and deaths are "grossly underreported". Experts say the true scale of COVID deaths in Myanmar is unknown.

He said the regime lacks competence in public health and had destroyed much of the existing infrastructure.

"The situation in Myanmar continues to deteriorate, with doctors and other health workers being targeted and essentially all public health services suspended," he said.

"It is now feared that Myanmar will become a major global superspreader site, given that its porous borders include the two most populous countries in the world."

Ms. Sarkis said people in Myanmar are trying to fight COVID-19 with a lack of oxygen, vaccines, and personal protective equipment.

"I hope that the Australian government will consider helping [by sending] the vaccine where it can be useful for other countries that will appreciate and treasure it," she said.

The ABC has approached the Department of Foreign Affairs and Trade and the Myanmar Ministry of Health for comment.

Earlier this year, the Australian government pledged $5 million to Myanmar, but the diaspora fears this money – funneled through ASEAN – will be controlled by the military.

Mr. Htut added that many were unable to mourn their families according to their culture and religion, and were missing important rituals to ensure their loved ones had a good transition to the next life.

For Ms. Nang, it's some small comfort that she was able to see her son's last moments via video.

"I was very grateful that my son was able to get a proper burial … [so] that his young son could visit his burial place," she said.

"This thing should not have happened … I wasn't the first person, and I won't be the last."