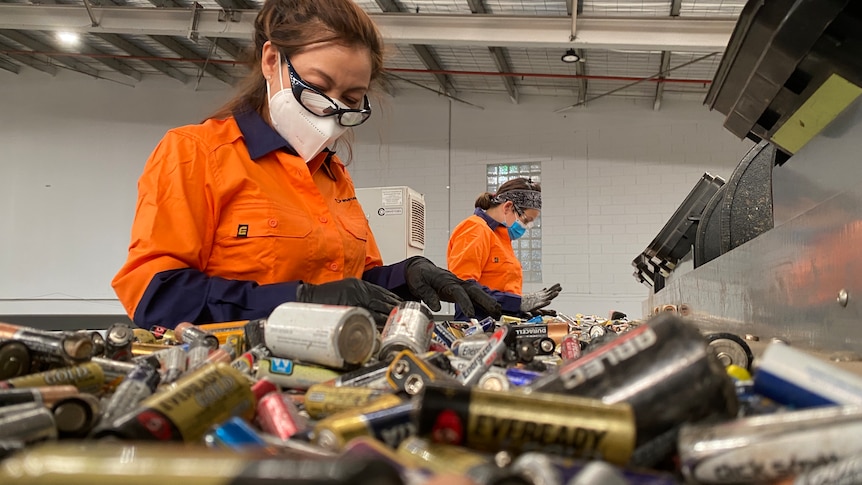 The new scheme will collect hundreds of thousands of tonnes of batteries nationally for recycling.

Have you ever chucked a dead AA battery straight into the bin?

Many of us are guilty of doing this, despite the known risks of them contaminating landfills or even starting a rubbish tip fire.

A national recycling scheme is now in action to make it easier for Australians to dispose of their old batteries in a safe way.

"It's been a long time coming," she says.

"It's going to have a far-reaching impact on the waste stream and innovation in this space.

"About 50 percent of people actually currently put their batteries in the general waste or recycling bin.

"And this causes some serious problems because, even though they're dead to us, batteries still maintain some charge.

"They can spark with other bits of metal and cause fires."

How can you recycle your batteries?

B-cycle officially launches today and will initially cover the smaller alkaline and lithium batteries that come inside common household items like television remotes and power tools.

It has teamed up with major retailers including Coles, Bunnings, and ALDI to put battery collection bins at thousands of their stores.

Ms. Chaplin is urging people to wrap the terminals of their batteries in clear sticky tape before disposing of them.

That is to reduce the risk of them catching fire. 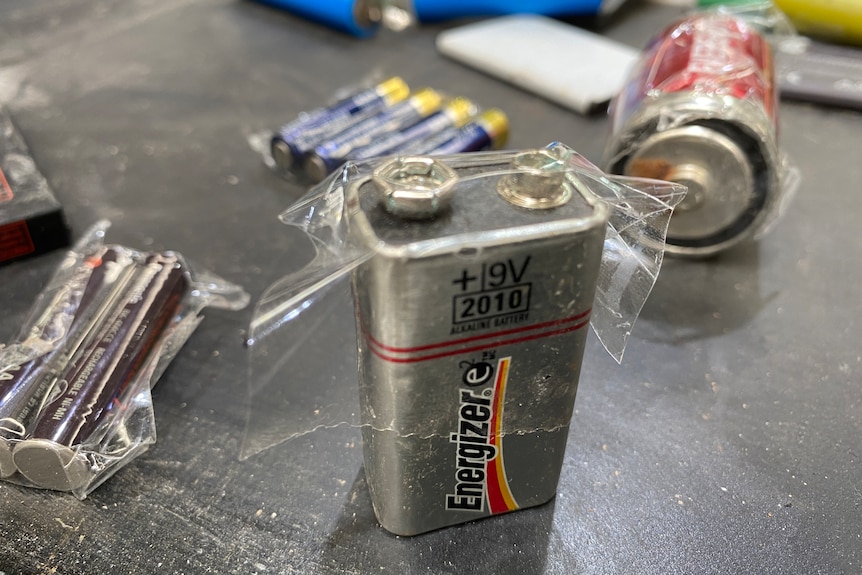 Consumers are urged to put plastic tape on the terminals of batteries they dispose of.

B-cycle estimates that Australians buy enough batteries every year to circle our planet 2.3 times. It believes 150 million loose or removable batteries are currently being stored in homes nationally.

As well as the environmental risks of all of this ending up in landfills, Ms. Chaplin says it is important to recycle the waste stream because the commodities inside batteries are finite and valuable.

"The World Bank projects that our demand for battery materials will increase by 500 percent by 2050," she says.

Battery recyclers are particularly interested in the waste stream from lithium batteries, with lithium in growing demand due to the rise of electric cars and solar energy storage. How will this recycling scheme work?

B-cycle is federally authorised under the Product Stewardship Act.

That act has already authorised many other national recycling schemes, including for e-waste and most famously for drink bottles.

These sorts of schemes require the companies that make these products – in this case, battery manufacturers – to financially contribute to the cost of dealing with their products' eventual waste streams.

In B-cycle's case, it has convinced major companies including Eveready and Energizer to contribute 2 cents for every 24 grams of product they sell in Australia.

The benchmark of 24 grams was chosen because it is the weight of a typical AA battery.

These batteries sell for anywhere from 50 cents to a few dollars. Just 2 cents a battery may not sound huge, but in terms of profits, it is large enough that this new overhead may be passed onto consumers. Product stewardship schemes can be voluntary, co-regulatory, or mandatory.

In B-cycle's case, it is completely voluntary for companies to join but Ms. Chaplin says they have managed to sign up all the major players in the Australian market.

Why do we even need a battery tax to encourage recycling?

Recycling is a complicated business.

It involves collecting a specific product, sorting it, scrapping the parts, and then selling these commodities on the market at a high enough price to make a profit.

"One of the areas where this happens automatically is scrap metal," UQ economist Professor John Quiggin says.

"So we don't need a [product stewardship] scheme like this for scrap metal. It's a valuable commodity and people want to pay for it.

"But most consumer goods aren't like this. The cost of getting out the bits and selling them is greater than what we get for them."

This is the predicament facing Australia's looming battery waste stream.

The money collected through B-cycle will help fund the collection, sorting, and recycling of batteries to help recyclers make the industry profitable and therefore self-sustainable.

Envirostream is a major recycler in this space. Most of the batteries that come into Envirostream are the less valuable alkaline sort.

Its Melbourne facility currently processes about 20 tonnes of this sort of battery waste every week and is not yet turning a profit.

"At the moment, we're in the investment stage of the business," Envirostream's head of commercial Max Lane says.

"At the moment, the battery recycling industry is in its infancy and as part of that, we obviously need to invest a lot in our equipment and our processes."

Mr. Lane says reaching profitability will partially come down to scale — which means they need more Australians to recycle their batteries.

"The volumes have definitely been rising," he said.

"And that's going to continue dramatically over the next four or five years, with the ramp-up of this scheme and the capabilities for people to have more convenient locations to drop off their end-of-life batteries."

However, Envirostream says profitability is also tied to the prices that global markets are willing to pay for the commodities inside these batteries. These prices fluctuate and can be volatile. Envirostream's Max Lane says the economics will need to line up to make battery recycling profitable.

Envirostream is owned by Lithium Australia, which, going off its name, is particularly interested in the lithium that can be salvaged from batteries.

Lithium is in strong demand due to its use inside electric car batteries, among other things.

However, the price the global market is willing to pay for recycled lithium can fluctuate, depending on how cheap or expensive it is for miners to pull the raw product out of the ground.

This makes modelling a business model around it fraught.

Lithium also currently only makes up a small portion of the batteries that Envirostream receives through current waste streams.

"Whereas the lithium batteries and some of those higher element batteries, they are a smaller part of the mix today, but they are rapidly growing in their percentage mix."

In a recent report on the issue, CSIRO projected the waste stream from electric vehicle batteries alone could reach 180,000 tonnes by 2036 in Australia.

So is this scheme worth it?

B-cycle took a decade to get off the ground after batteries were first identified as a recycling priority by the federal government in 2011.

UQ economist John Quiggin says the scheme may have been able to get more cash off battery manufacturers if it had been co-regulatory or mandatory for manufacturers to sign up to.

"With [a voluntary scheme] they typically have to sweeten the deal," he says.

"This scheme is voluntary but every little bit counts."

She says there is scope for the battery manufacturers' financial contribution to B-cycle to be raised from 2 cents to 4 cents if needed.

"We're just collecting 10 percent [of this waste stream]," she says.

"We're now putting the rebate in place. And that means that we're going to quickly build capacity and infrastructure."