Silo art has turned the Australian outback into a vast outdoor gallery. Dotted across the country, the gigantic murals give those exploring the land an insight into the people who live there 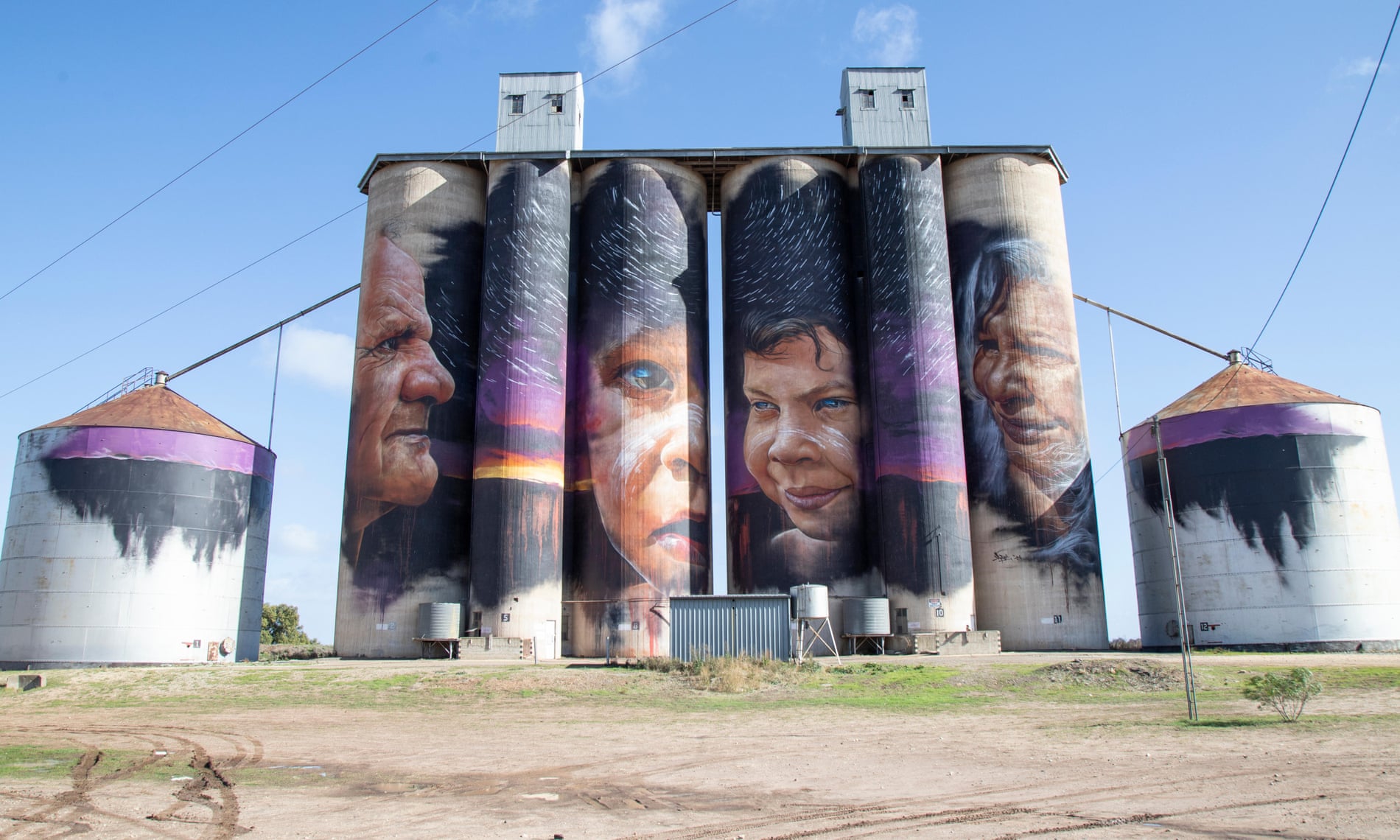 Painted on old GrainCorp silos, this mural at Sheep Hills in western Victoria is a tribute to the traditional owners of the area. The Melbourne artist Adnate spent four weeks with the community and wanted to shine a light on the region’s young Indigenous people and show the strong ancestral connection that they share with their elders. 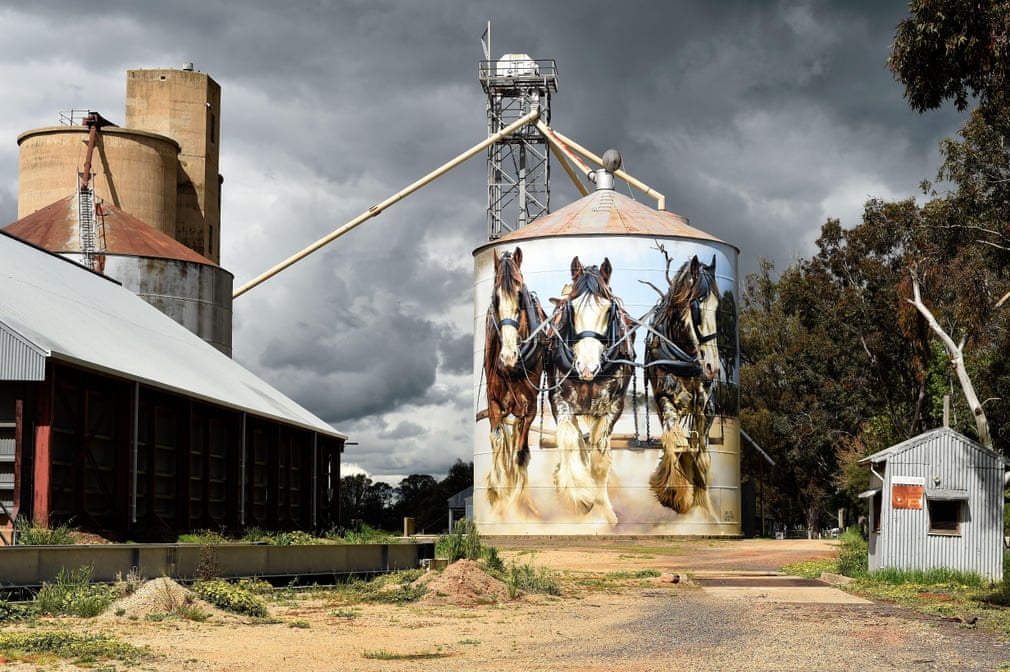 Melbourne street artist Jimmy Dvate, known for his depictions of the natural world, painted the Goorambat silos in Victoria’s north. One silo is a tribute to three Clydesdale packhorses named Clem, Sam, and Banjo from a family of horses dating back 100 years. Another shows a threatened barking owl, drawing attention 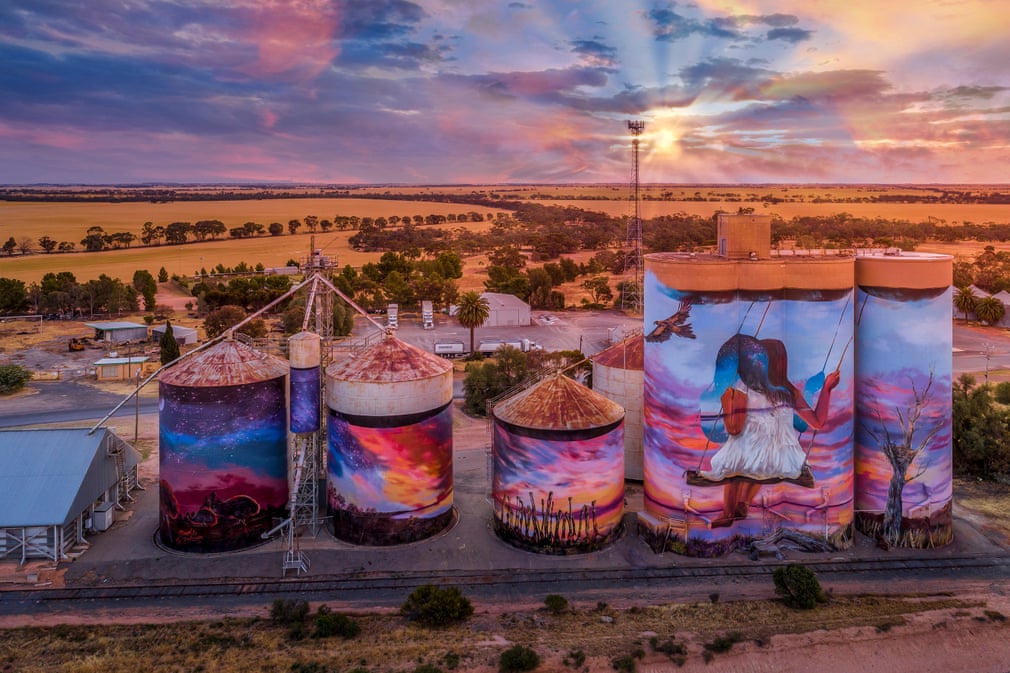 These GrainCorp silos at Sea Lake in northwest Victoria show a young girl sitting on a swing looking over Lake Tyrell as the sunsets. Artists Joel Fergie and Travis Vinson were inspired by the traditional stories of the Boorong people and early Indigenous astrology. 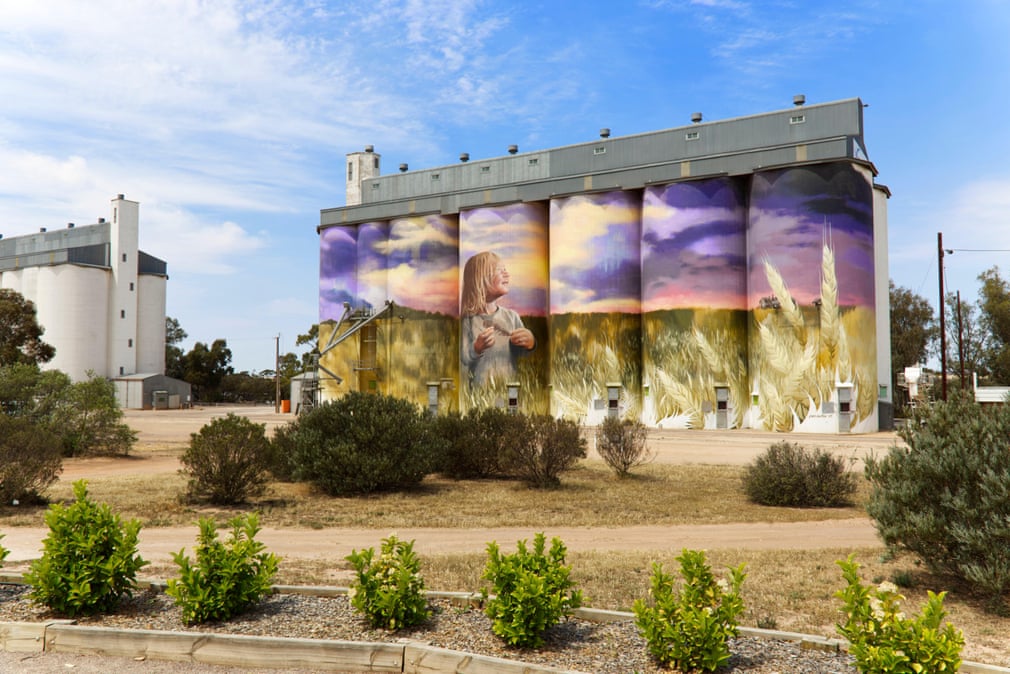 The artist Cam Scale spent 26 days painting the Viterra grain silos in Kimba in South Australia. The 60 meter-wide mural depicts a girl standing in a wheat field that blends into the real thing behind the working silos. 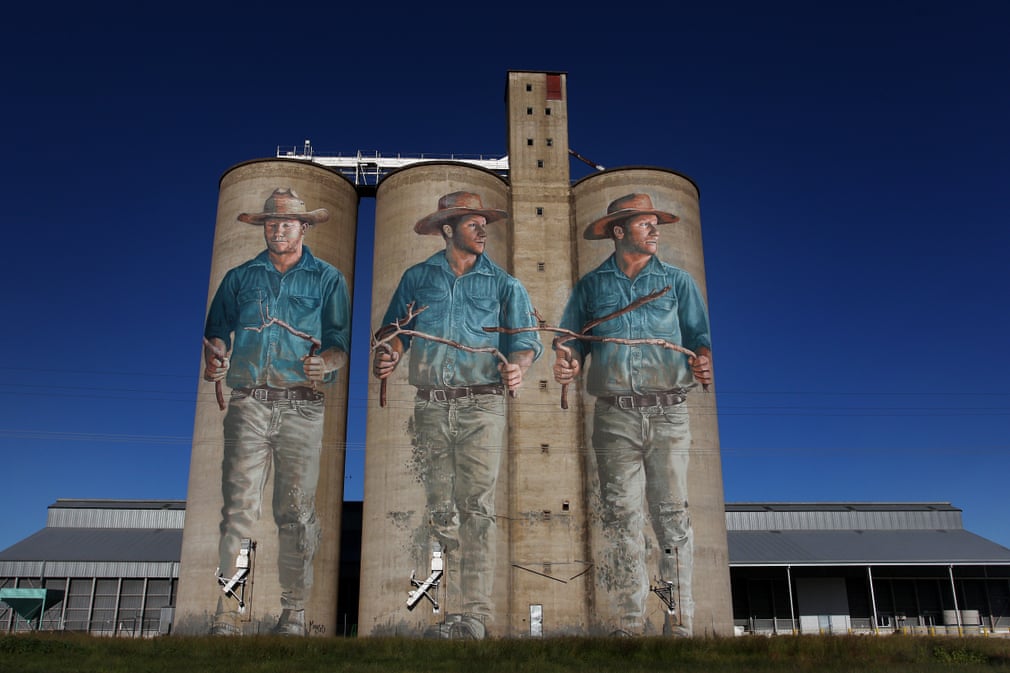 With sticks in his hand, a water diviner searches for groundwater in this mural, painted by Fintan Magee at Barraba in New South Wales. Diviners study the land and as they walk minerals and magnetic forces supposedly move the sticks when there is moisture below. Despite studies saying the technique is pseudoscience, diviners are still used in Australia to find groundwater. 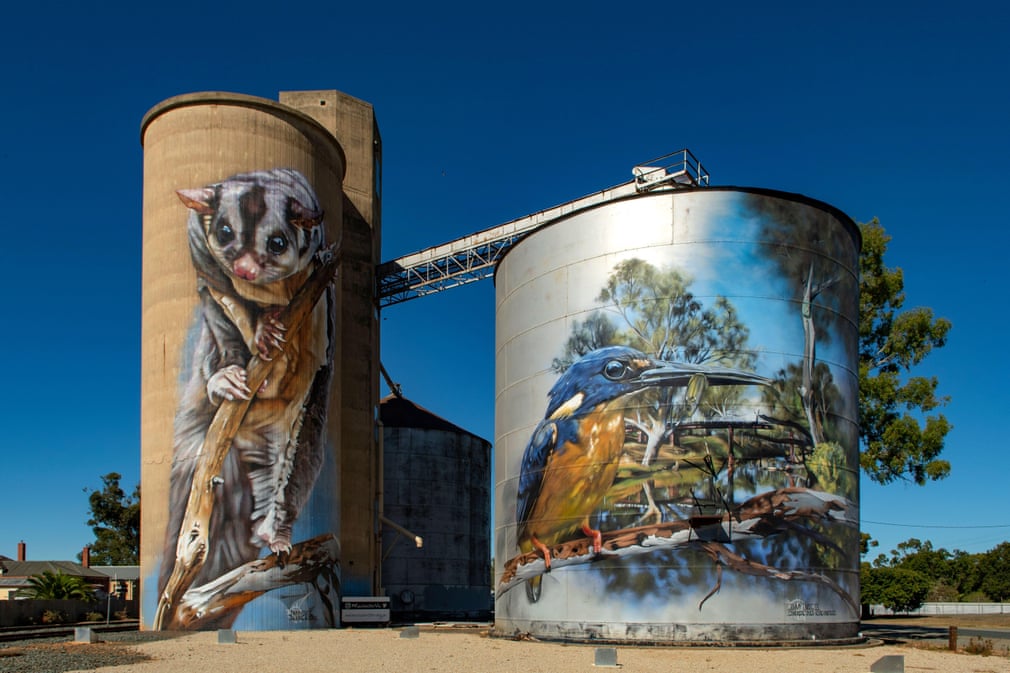 Jimmy DVate also painted these colourful GrainCorp silos in Rochester in Victoria, again showing his respect for threatened native wildlife. On the banks of the Campaspe River, the piece features a wrist-winged glider alongside an azure kingfisher. 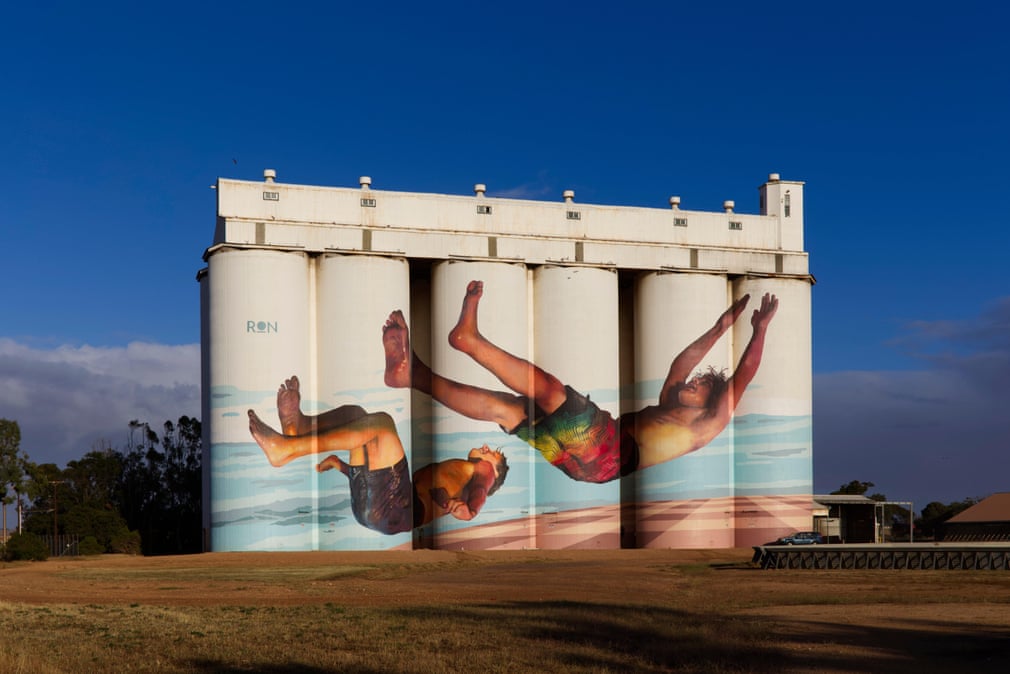 In this summary scene by Martin Ron and his assistant Matt Gorrick, two boys jump off the Tumby Bay jetty. The artists spent some time in the coastal town on South Australia’s Eyre Peninsula and saw locals diving off the jetty into the sea, providing the inspiration. 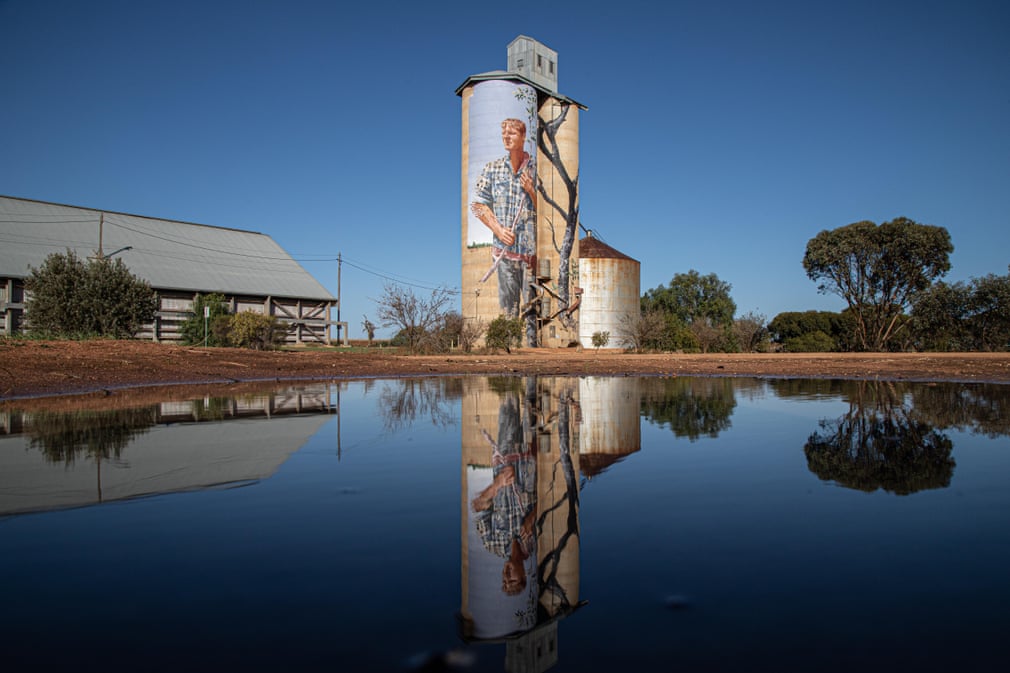 In Victoria’s northwest, you’ll find this GrainCorp silo in a town called Patchewollock. The artist Fintan Magee book a room at the local pub to get to know the community in the area during the project. He eventually met a local man Nick Hulland, who would become the subject of the mural, illustrating the hardworking attitude of the community. 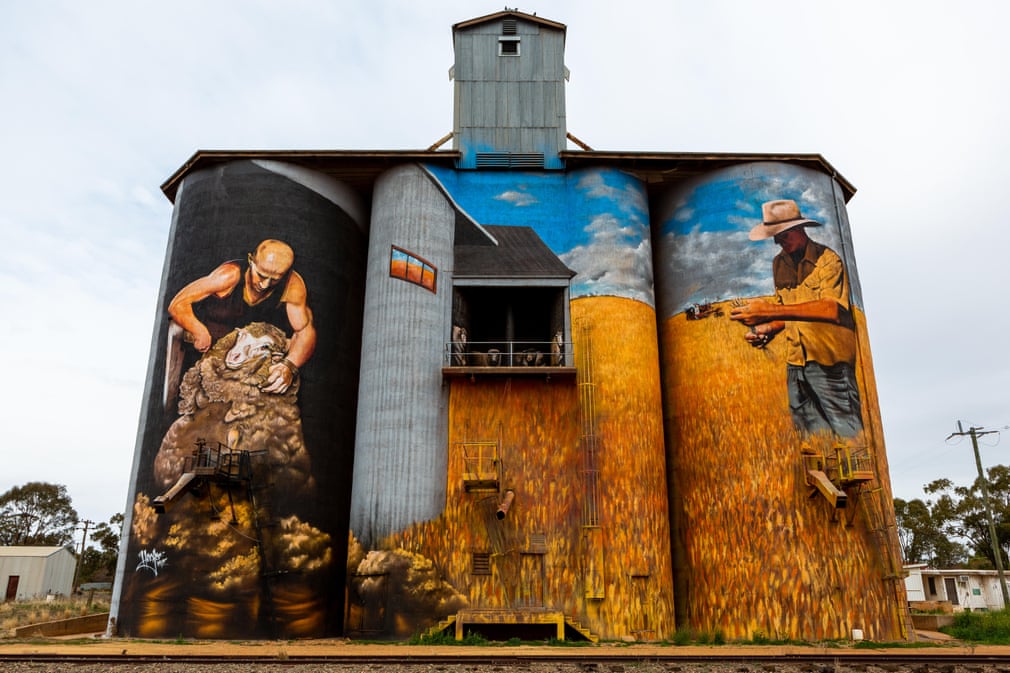 The Weethalle grain silos, built in 1930, were painted by Melbourne artist Heesco Khosnaran as a tribute to the rich agricultural heritage of Weethalle and the surrounding region. They portray a shearer, a grain farmer, and a small flock of sheep keeping a watchful eye over the land. 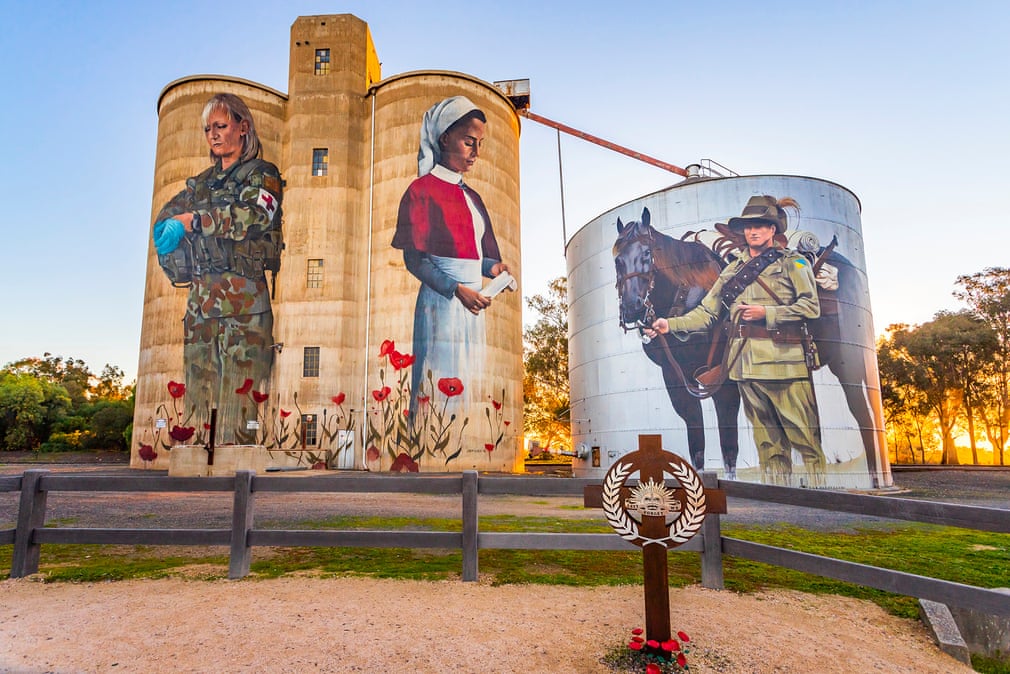 Another mural by Cam Scale, the GrainCorp Devenish silos in Victoria depicts a first world war nurse and a modern female military medic. It portrays the changing role of women in the military and society. The mural was later updated with a tribute to the Australian Light Horse, mounted troops who served in the Boer War and the first world war. 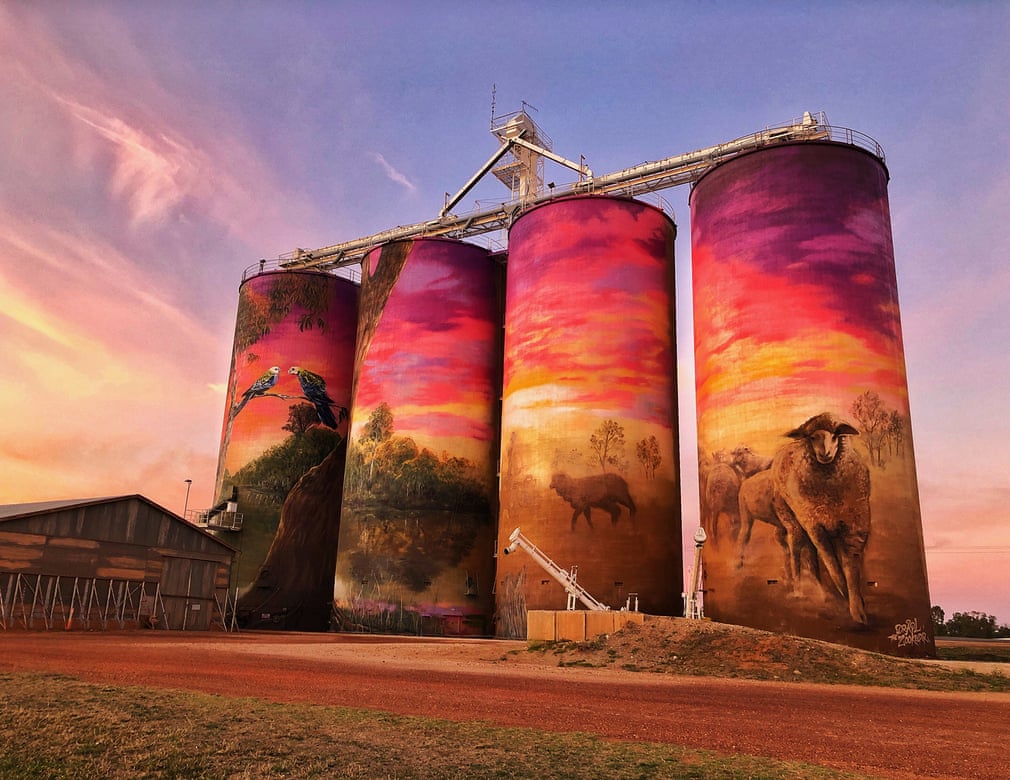 The Watering Hole, by artists Joel Fergie and Travis Vinson, is found on the GrainCorp silos in the town of Thallon in Queensland. It depicts a vibrant sunset over the nearby Moonie River and reflects the agricultural aspect of the region. 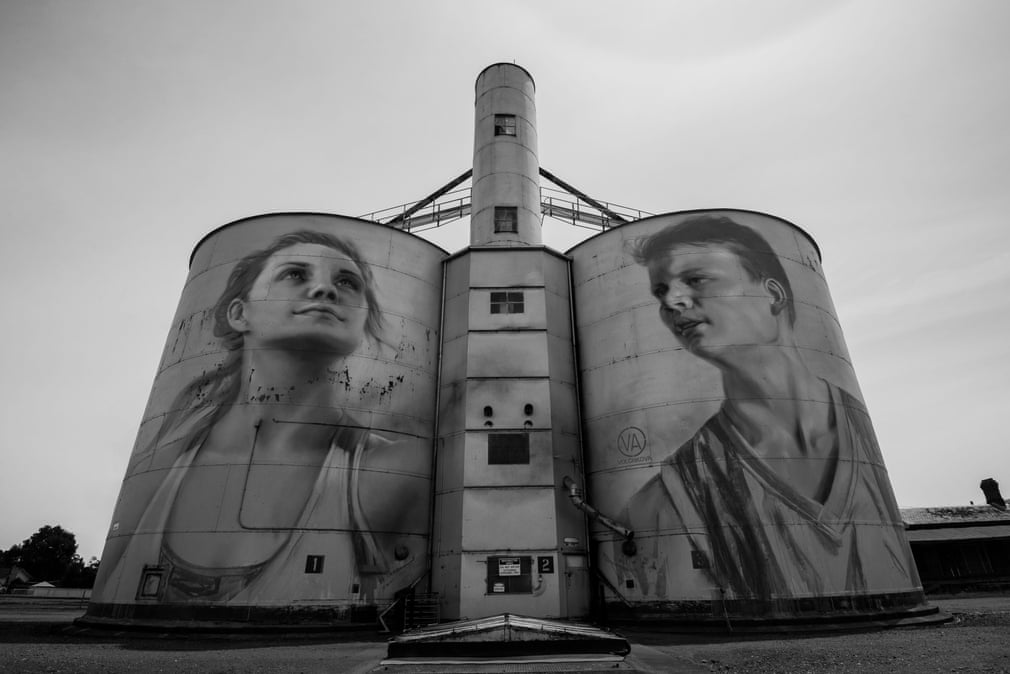 One of the closest silo artworks to Melbourne, this mural at Rupanyup was created by the Russian street artist Julia Volchkova. The work reflects the sporting culture of Rupanyup’s young people and features Jordan Weidemann and Ebony Baker, who are members of local Australian football and netball teams.