Britain’s military deployment in Mali is significant, but little is known about what is called the most dangerous current UN mission. 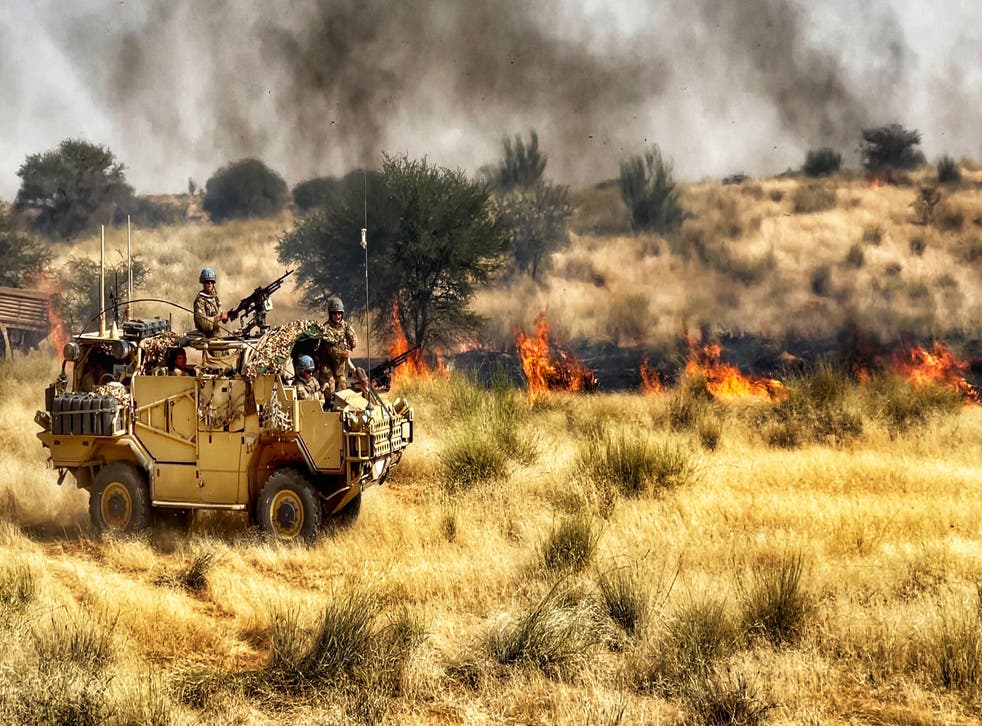 The sudden bursts of machinegun and Kalashnikov fire erupted from the long grass and thorn bushes as the British troops approached. They shot back and after an intense exchange, in which 700 rounds were fired over 12 minutes, two suspected Isis fighters lay dead.

Twenty-four hours later the same soldiers were trying to escape a swirling fire closing in around them. One of the armored vehicles the troops were traveling in, loaded with weapons, ammunition, and fuel was set alight and destroyed. The men onboard jumped out and scrambled to safety as others ran for cover.

Two soldiers injured trying to get away from the fire were flown by helicopter back to the headquarters of the UK forces, an international base near the city of Gao. A previous task of the medical team treating them had been to provide support in the aftermath of a car bombing targeting a German base that wounded 12 soldiers.

The clash with the jihadists in eastern Mali was the first time regular British troops have been in combat since 2014. The flames which could have engulfed the convoy causing enormous losses highlighted the harsh and risky conditions in which the force is operating.

The British military presence in the country is one of the most significant deployments overseas by this country since Iraq and Afghanistan, but little has emerged about their role in what has been described as the most dangerous UN mission taking place at present.

The force of 300, based on the 2nd Battalion of the Royal Anglian Regiment, a squadron of Queen’s Dragoon Guards and supporting units, is in a region facing the fastest growing Islamist insurgency in the world. One potent indication of what is unfolding is UN figures which reveal that around 38 percent of all IEDs (improvised explosive devices) found internationally in the first nine months of this year were in Mali.

An Isis affiliate – Islamic State in Greater Sahara (ISGS) – and an al-Qaeda affiliate, Jama’at Nusratful Islam wal Musimlim (JNIM), are in the country with their leadership declaring that the Taliban victory in Afghanistan has energised and given them a huge boost to continue jihad, and drive out foreign forces.

Neighboring states in the Sahel – Chad, Niger, Burkino Fasso, and Nigeria – have also been subjected to repeated attacks with alliances being built among the Islamist groups such as Boko Haram as well as Isis and al-Qaeda.

The Minusma peacekeeping force in Mali numbers 16,000. Sixty-four nations are currently engaged in various capacities in the country, both in civil and military roles, with rising alarm over the growing jihadist presence. 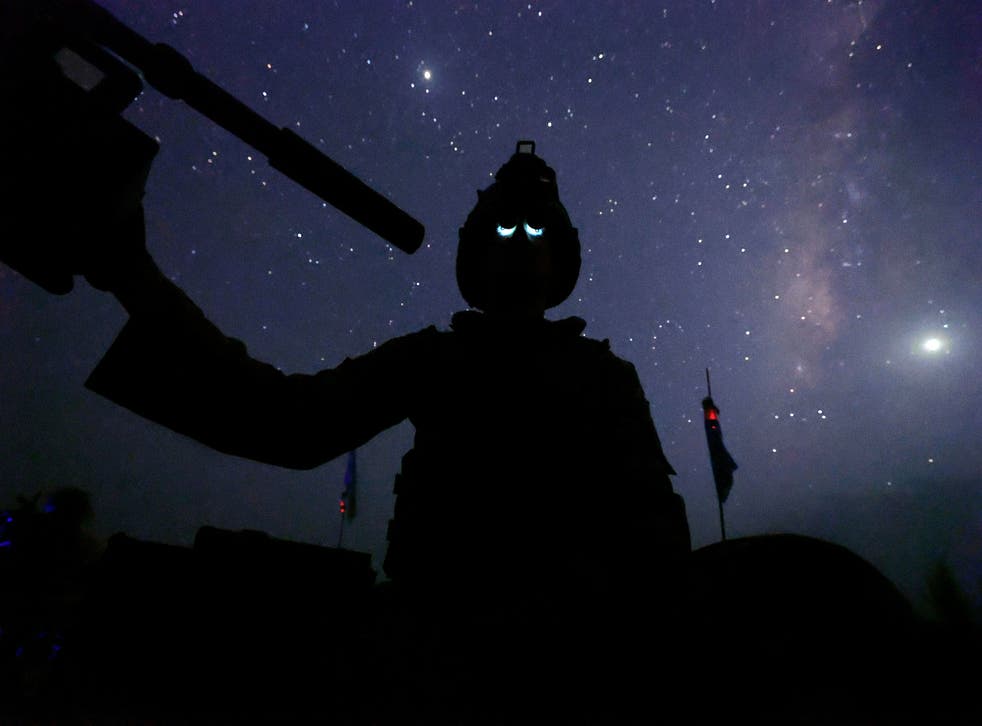 The role played by the UK forces is not replicated in any other UN operations. Its Long Range Reconnaissance Group (LRRG) carries out mobile patrols across vast stretches of inhospitable terrain which has seen little or nothing of the Malian government, but plenty of Islamists as well as organised criminal gangs.

The range of patrols is said to be the furthest since the ones the SAS – called the Long Range Desert Group when first formed – carried out in North Africa in the Second World War. There are other references to the SAS in the mission, the main base, Camp Bagnold, is named after Major Ralph Bagnold, an innovator of desert fighting in Egypt and Libya.

The foreign presence in Mali has taken a highly contentious turn due to modern-day international rivalry. Emmanuel Macron has announced that France, leading a separate counterinsurgency operation, Barkane, will drastically cut the size of its force.

Mali’s military regime, which is running the country after two coups in nine months, accused the French of a deliberate “lack of consultation” and “abandoning Mali in mid-fight”. It said negotiations were underway with the Russian mercenary company, the Wagner Group, to replace the French.

France and Germany have warned that they will reconsider their military commitment to Mali if the deal with Wagner, owned by an ally of Vladimir Putin and accused of committing atrocities in a number of countries, is allowed in. In London, defense secretary Ben Wallace has expressed his deep concern about the development. 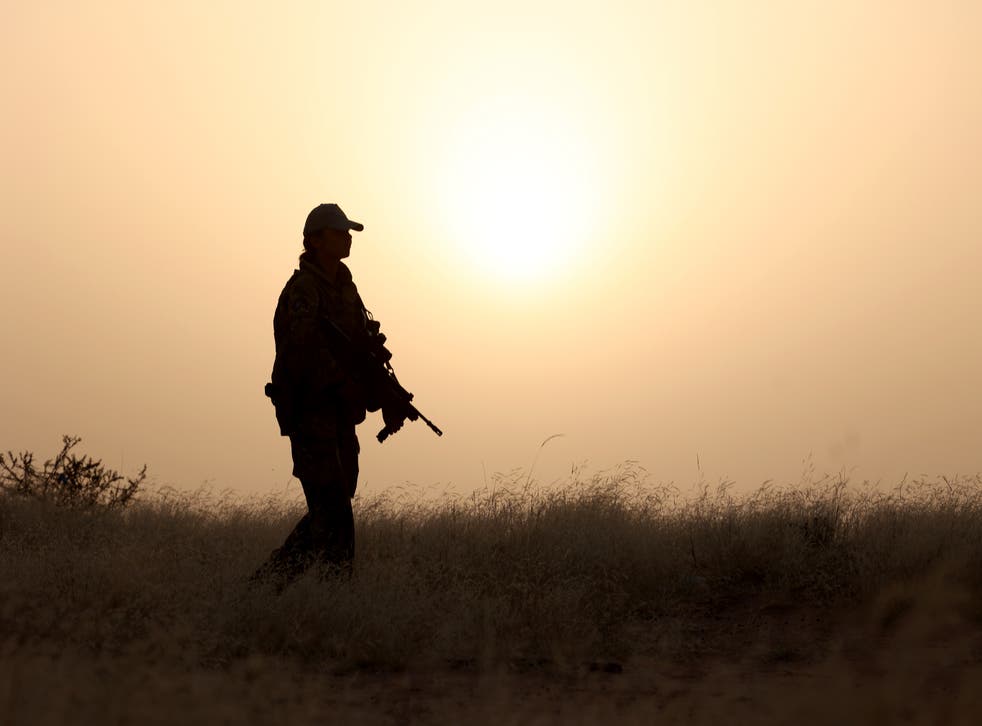 A British troop on patrol in Menaka, Mali

The unrelenting strife, meanwhile, continues. The latest deaths included those of seven Malian soldiers last weekend in attacks north of the capital, Bamako. Two were killed by gunmen, five others when their pick-up truck was hit by a roadside bomb.

As is the case in such conflicts, it is the civilians in Mali who have borne the brunt of the bloodletting. The last 12 months were the most lethal since fighting began in 2012, with 2,845 killed.

The UK force’s main remit is to gather intelligence in hard-to-access rural areas where people are prey to the men with guns; this at times, involves not just that Islamists and criminals, but some of the myriad of militias supporting the government.

There have been a series of massacres by the jihadists and it was the killing of 54 people in the village of Outtagouna in August which has been one of the main recent points of focus for the British forces.

The murders were one of the worst atrocities of the nine-year war. Armed men surrounded the village and surrounding hamlets and carried out executions after, it is claimed, accusing the residents of informing to the authorities, and flouting the version of sharia they had imposed.

The gunmen, who had arrived on motorcycles, went from home to home in Outtagouna dragging out males, including boys as young as 12, and shooting them. Cpl Charlie Jones, from the Royal Anglian Regiment, recalled “you could see what they had done, there were bullet holes in the doors. What happened there was really, really bad.”

Sgt Shaun Carson, of the Royal Military Police, was shown a ditch by the roadside where people had fallen after being lined up and shot.

“There had been a clean-up of sorts but you could see evidence of what had taken place in the irrigation ditch, there were a lot of lives lost. One of my memories is of people gathered under a tree waiting to leave the area and almost next to them piled up the earth with rocks stuck together by blood and matter”, he said.

The UK troops had made a number of arrests of armed suspected Isis members following the Outtagouna killings, and it was an attempt to question two gunmen which led to the shoot-out.

Troops from the Queen’s Dragoon Guards and Royal Anglian had traveled 160km (100 miles) from their Gao base to a remote area to scout for alternative routes to a road hit by IEDs when the clash took place. The officer in charge, Major Bryn Williams, had been present, by coincidence at that last round of combat in Afghanistan.

The soldiers spotted two men on a motorcycle carrying a PKM Russian-made general-purpose machine gun and a Kalashnikov AK- 47 assault rifle. Asked to stop, the men tried to drive off. But their motorcycle hit a rock. The men fell and fled into a patch of undergrowth.

Some of the soldiers dismounted from their Jackals and approached the thorny bushes when the shooting began. “There was sudden burst, it may have been as just three metres away, I could see muzzle flashes and knew how close it was”, said Trooper Sam Jones. “ I couldn’t see anything much else at all. I fired off a few rounds and then took cover, the Isis guys kept shooting.” 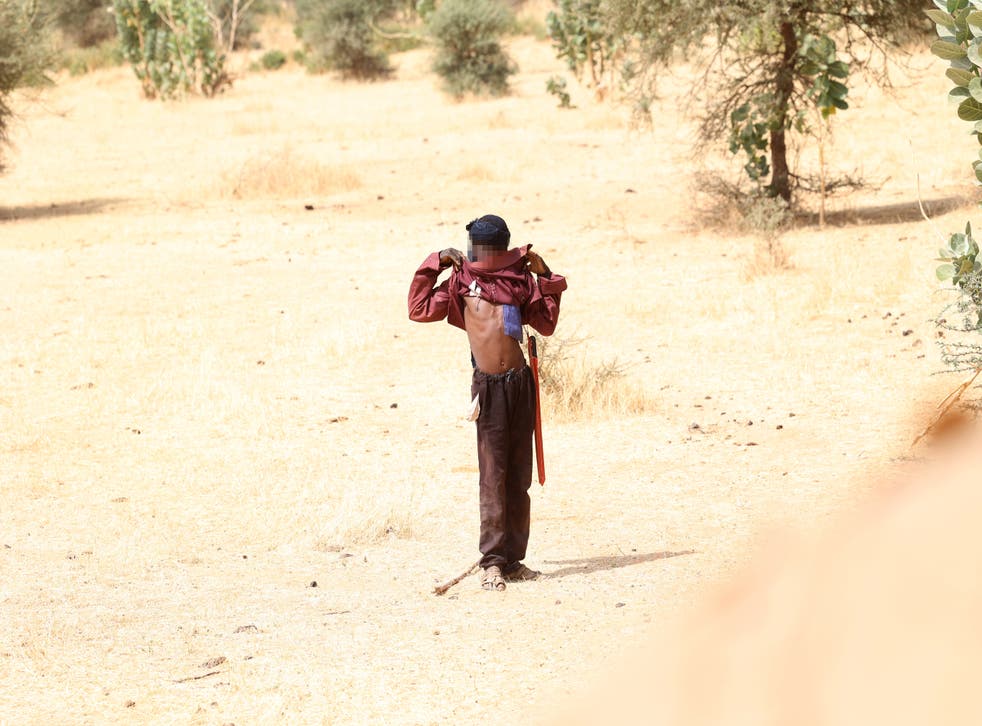 Troops from 4th Troop C Squadron, Queen’s Dragoon Guards tell a suspicious man to lift his shirt to show he is unarmed

Operating in such a volatile and violent arena brings with it the possibility of casualties as well as the apprehension of “mission creep”. 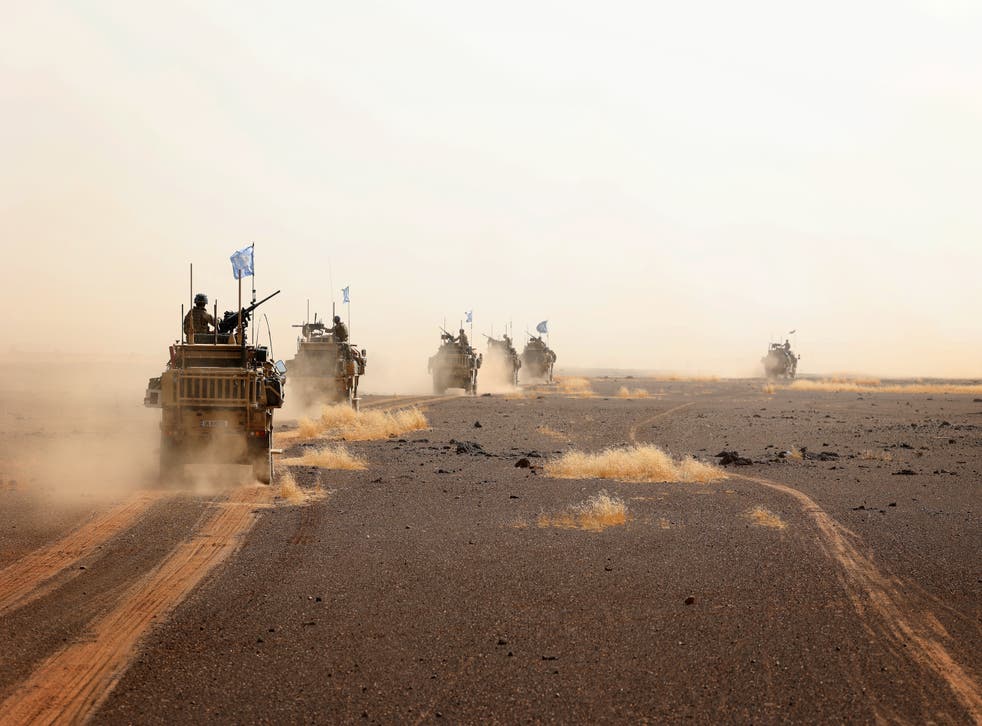 But Lt Col Will Meddings, the commanding officer of LLRG, was insistent that the Malian deployment would not slide into a long-term counterinsurgency operation like Afghanistan.

Speaking at a forward operating base near the town of Mineka, he wanted to stress: “The UK is a member of the P5 (permanent members of the UN security council) and the government has decided to take part in peacekeeping, to play a part in stabilizing the Sahel because of the dangers which can spread from this region.

“We have been asked by the UN to carry out long-range reconnaissance missions because we have the capability to do so. I don’t think this will turn into another Afghanistan, the dynamics are very different, and the UK’s involvement is time-limited.”

British troops getting involved in combat did not Col Meddings held, risk breaching the UN’s neutrality, and engaging with the enemy was sometimes unavoidable.

“We have to gather information, intelligence, and reassure the population, that is our job,” he said. “One can do all that, but there comes a point when you have to protect the people from those who are terrorising them. We also need to protect ourselves, this does not dilute the sanctity of the blue helmet, we act within the UN rules of engagement.”

Out on patrol with the troops along desolate stretches of ground one came across hamlets and villages dotted over large distances. Some of the local people denied any knowledge of the jihadists and the criminal gangs: speaking to foreigners had, in the past, brought bloody retribution.

A few, however, were prepared to speak. At a hamlet in Tarabat a subsistence farmer described the risky realities of life for him and his community. 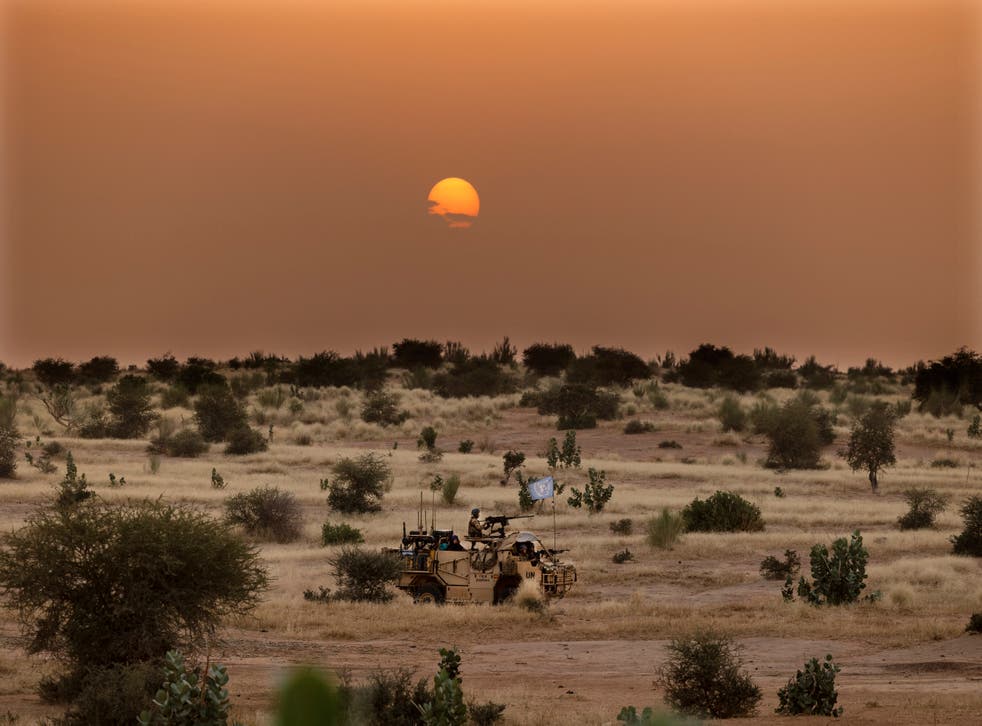 Troops out on reconnaissance patrol

Mohammad did not want his full name published. Some who had spoken to outsiders had faced retribution from the Islamists; four men had been beheaded in the past not far from where we spoke.

“Mohammad is a name is common enough, so that is OK,” he said. “Anyway, what I am saying is known to everyone. We get bandits coming and robbing us, taking money, cattle. They also operate in the towns, we know of women being kidnapped.