Social restrictions imposed in Greater Sydney in the wake of two locally acquired cases of COVID-19 will be extended by a week as NSW adopts a cautious approach to stamping out further new cases. 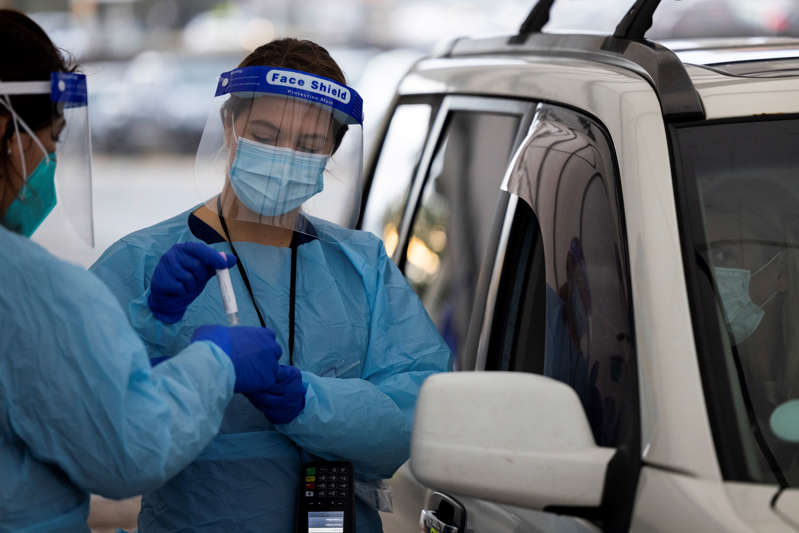 A nurse collects COVID-19 test samples at the Bondi drive-through testing clinic on May 05, 2021, in Sydney, Australia.

NSW recorded no new cases of community transmission of the virus in the 24 hours to 8 pm on Saturday but a suite of restrictions that took effect on Thursday at 5 pm will remain in place, apart from a requirement for customers to wear masks in shops.

Premier Gladys Berejiklian said the "missing link" between two local cases of COVID-19 detected on Wednesday remained unclear and the government was "keen to prevent a super-spreading event".

She said existing restrictions, announced on Thursday for Greater Sydney, including Wollongong, Central Coast, and the Blue Mountains, "will be in place for an extra week, except for shoppers in retail who will no longer be required to wear a mask".

Public-facing staff in retail outlets must continue to wear a mask.

The two cases, recorded in a man in his 50s from Sydney's eastern suburbs and his wife, are the first known locally acquired cases of the Indian B.1.617 variant of the virus in NSW.

Genomic sequencing revealed the man's infection was linked to a returned overseas traveller from the US, who was quarantined at the Parkroyal hotel at Darling Harbour last month.

However, it is not known how the man, who has no known links to the hotel quarantine or hospital systems, caught the virus, leading health authorities to believe there is at least one person in the community who does not know they have been infected.

"Despite extensive investigations to date, NSW Health has not identified how the initial case, the man in his 50s, was exposed to COVID-19, which suggests he acquired the infection through brief contact with a currently unidentified person who was infectious in the community," NSW Health said on Sunday.

The new restrictions took effect at 5 pm on Thursday in Greater Sydney and were expected to end at 12.01 am on Monday.

On Sunday morning, NSW Health announced that the bulk of the measures would be extended by a week, to 12.01 am on Monday, May 17, in order to "safeguard the community and reduce the risk of further transmission".

Under the restrictions, household visitors are limited to 20 guests, including children. Masks are compulsory on public transport and in all public indoor venues, such as retail, theatres, hospitals, aged care, and for front-of-house hospitality staff.

Dancing is not allowed at indoor hospitality venues or nightclubs but is allowed at weddings with a strong recommendation that no more than 20 people are on the dance floor at any one time. Visitors to aged care facilities are limited to two people per day.

Authorities were bracing for more cases linked to the couple and NSW Chief Health Officer Kerry Chant had warned the man had a high viral load, potentially making him highly infectious.

NSW Health said six new cases were acquired overseas at 8 pm on Saturday. A previously reported overseas acquired case was excluded after further investigations. The state has recorded 5343 infections since the start of the pandemic.

Testing rates were slightly down on Friday's numbers, with 18,024 tests reported to 8 pm last night, compared with 22,153 the previous day.

On Sunday Prime Minister Scott Morrison insisted Australia had not changed its policy to adopt an elimination strategy, as reported by News Corp Sunday. He said any suggestion that this was the case had been "misreported" and subsequently corrected.

"International borders will only open when it is safe to do so," Mr. Morrison said. "We will have a long way to go."

Six people who tested positive for COVID-19 in hotel quarantine in NSW in the three weeks to May 1 had already been fully vaccinated overseas, according to NSW Health data, among the 150 overseas cases recorded.

Two other cases were recorded earlier in April in people who had received both doses of a two-shot vaccine but were exposed to COVID-19 within 14 days of their second dose, raising the prospect they were not fully vaccinated when they caught the virus.