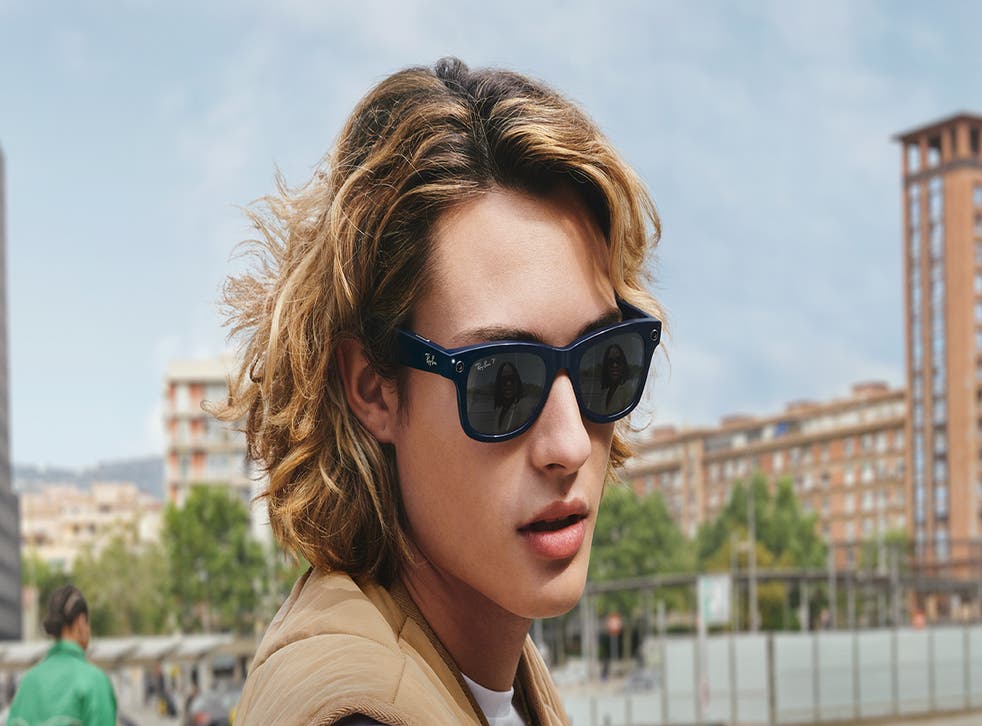 Photos and videos taken by the glasses are sent to a new Facebook View app, with a little white light that lets people know when they’re active

Facebook has finally announced its long-rumored ‘smart glasses’ in partnership with Ray-Ban, which feature two front-facing cameras to quickly capture pictures and video.

The glasses, marketed as Ray-Ban Stories, come in 20 variations including Ray-Ban’s Wayfarer design, around design, and its Meteor design. They are not waterproof so should not be taken out in the rain.

Users operate the glasses with a little button on their temples that will capture 30 seconds of video with a short press, and a 2592 x 1944 pixel photo with a longer press. Alternatively, users can say “Hey Facebook” and give voice commands to the glasses to take a photo or video.

Built into the glasses are three microphones and Bluetooth connectivity, so users can connect to audio from their phone, make calls and send messages. There is an integrated touchpad on the side of the glasses allowing users to slide their fingers up or down to control the volume.

Facebook says the glasses will last six hours per day for three days with a fully charged case.

The Ray-Ban Stories glasses look notably similar to another smart glasses product for Snapchat – Spectacles. Facebook, which tried to purchase the company for $3bn in 2013, also has a history of copying Snapchat features with filters, disappearing messages, and most notably Stories.

However, when the first iteration of those glasses was released only 0.08 percent of the app’s user base bought them, and it has been reported that under 50 percent of buyers kept using Spectacles one month after purchase. Snap said it took a $40 million writedown on the product.

Facebook and Ray-Ban told The Independent, however, that it is offering a more complete experience with capture, audio technology, sharing, and a smart assistant that will set it apart from competitors.

The other major concern users might have over the Ray-Ban Stories is Facebook’s history of data privacy. The company has been repeatedly criticised over its failure to protect users’ data and the amount of information that it collects as people use its services.

Moreover, smart glasses as a technology have also been infamous for their inherent risk to privacy. Ray-Ban Stories collects data about battery status, and the email address and password of the users’ Facebook account, and additional data like the number of images captured or how long a user spends taking videos can also be provided to Facebook.

Pre-empting this response, Facebook says that it designed the glasses with “privacy in mind” and claims it will not use this data to target users with ads. One of these privacy-focused design choices is a small LED light hardwired to the camera (like the green light on Apple’s Mac computers) that shines white when the camera is taking a photo.

However, it doesn’t seem difficult to obscure the light by means of a small piece of tape or black putty – and although Facebook says tampering with the camera violates the glasses’ terms of service, there is no way for the company to detect when that is happening.

Instead, Facebook says it recognises that “like any new technology that’s entered the market, there will, unfortunately, be instances where people will look to use the glasses inappropriately”, but has “published a set of tips that advise people on how to use the glasses safely and respectfully to protect themselves and others around them”.

These include “encourage[ing users] to respect people’s preference on whether they wish to be in a photo or video”, although it is worth noting that people uploading photos and videos of others without their consent remains commonplace on the internet and has been so for years.

Speaking to some of the third-party group's Facebook consulted in developing the glasses, the level of concern was mixed. Jeremy Greenberg of the Future of Privacy Forum said that “in the event that a wearer is obscuring the LED indicator with tape or anything else was that additional forms of notice to bystanders would be necessary”, such as physically pushing a button or talking to the smart assistant.

However, he added that “in this scenario, other bystanders, such as those with vision impairment or low vision or those who are hard of hearing might not have sufficient notice. Additionally, because of the novel nature of smart glasses, it will take time for bystanders to understand and recognise when a pair of smart glasses are ‘smart,’ what data the glasses are capable of capturing, and when and how the glasses are recording even with the built-in visual and audio cues.”

John Breyault, of the National Consumers League, expressed a similar sentiment: “I am concerned about users who will intentionally obscure the small light. I would have preferred that there be a sensor that disabled the glasses if the light was obscured”, he told The Independent.

“Unfortunately, that doesn’t seem to be the case for these glasses. It’s my hope that this functionality will be incorporated into subsequent versions of the glasses.”

As for Facebook’s reputation in general, both Greenberg and Breyault said that its history may have made the company think more seriously about the privacy and security of the glasses, with Breyault comparing them to smart speakers or Amazon’s Ring doorbell – a technology which has been hacked in the past, and used for police surveillance.

As well as these smart glasses, Facebook is also developing more capable augmented reality glasses which will “add a 3D layer of useful, contextually-relevant and meaningful information on top of the physical world” according to the company’s blog post.

Facebook says the device could help with everyday tasks, such as finding keys, navigating a new city, or “capturing a moment”, seemingly building on the functionality of Ray-Ban Stories.

Ray-Ban Stories will be available on 9 September 2020, priced at £299 and equivalent prices in the United States, Italy, Australia, and Canada.