His talent for making the unreal feel real was a special one. 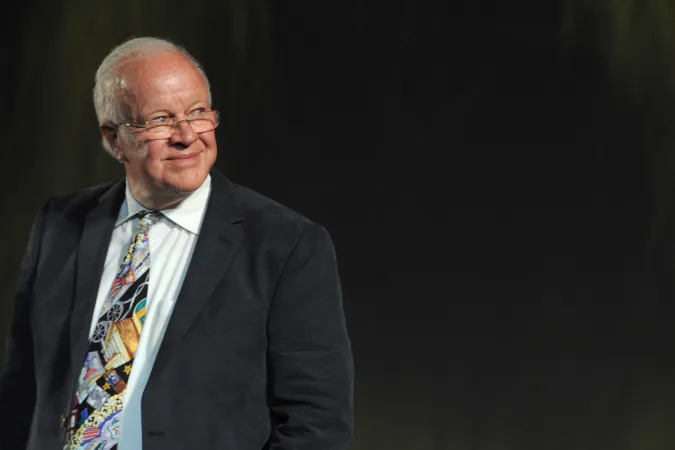 If you’ve watched a classic, landmark sci-fi movie and you were blown away by the quality and realism of its effects, then there’s a good chance Douglas Trumbull’s name is in the credits. The VFX pioneer, who passed away on February 8th, 2022, has worked on key films in the sci-fi canon. Even a short version of his resume would have to include 2001: A Space Odyssey, Close Encounters of the Third Kind, Star Trek: The Motion Picture, Blade Runner, and Silent Running. To have worked on one of those in your lifetime would have been a big deal, but to have contributed to all of them speaks to just how much work Trumbull did to push the art form forward.

Trumbull was the son of an artist and engineer, Donald Trumbull, who worked on VFX for The Wizard of Oz. Douglas, a talented painter, and artist in his own right got a job at Graphic Films and worked on a short film about space travel for the 1964 World’s Fair. The clip piqued the interest of Stanley Kubrick, who then started work on the film that would eventually become 2001: A Space Odyssey. Kubrick began working with Graphic Films, and by extension Trumbull, but when he relocated production to London, stopped speaking to his would-be partners. Trumbull, however, was so excited by the idea of the film that he reached out to Kubrick personally. He was then hired and brought over to London to work on the title.

One of Douglas Trumbull's jobs in 2001: A Space Odyssey was animated technical graphics for the computer screens. I was amazed to learn he had created the animation with tables and graphs from technical journals to create dozens of screens. His ingenuity was an inspiration to me.

Trumbull’s job in 2001 was as one of several visual effects heads on the project, the others being Con Petersen, Wally Veevers, and Tom Howard. (Kubrick himself was also credited, and it would be his name and his name alone on the Academy Award for Best Special Visual Effects the film won in 1969.) His first task was to design the “computer” graphics shown on the displays that littered Kubrick’s future world. But his job quickly grew, and Trumbull would eventually be responsible for the use of slit-scan photography that created the film’s climactic Star Gate sequence. You can watch Trumbull explain this in some depth during this long talk about his life and career at the 2012 Toronto International Film Festival.

Having made a name for himself, he launched his own VFX company and produced the effects for Robert Wise’s The Andromeda Strain. That would garner him enough credit at Universal Pictures to earn him the right to direct an experimental, super low-budget film of his own. (The studio was, at the time, experimenting to see if low-budget films would garner a following through word of mouth, aping the success of Easy Rider a few years previously.) This project would become Silent Running, an often-overlooked classic of the genre.

In many ways, Silent Running is a humane rebuttal to 2001, with Trumbull’s warmth acting as a reaction to Kubrick’s emotionlessness. The film depicts a dystopian future in which the last of Earth’s plant life is carried on the back of enormous geodesic arks into space. But when the crews of these arks are told to detach and detonate the domes, one botanist will risk everything to save the plants he so cares for. Despite the low budget, the visuals are top-notch, and the central performance from Bruce Dern is one for the ages. Of course, the film’s third-act twist – if it can be called that – does rely on the stupidest plot moment in any film ever. But it’s the one flaw in an otherwise great movie that, due to its status as a financial flop, means it’s often ignored as b-movie fodder.

Trumbull’s interest in pushing the boundaries of filmmaking technology meant that he devoted much of the ‘70s to developing new technologies. That included Showscan, which ran 70mm film at 60 fps, which Trumbull said offered a new level of immersion and engagement. Sadly, the cost and complexity of such a technology proved a key stumbling block to it being picked up by mainstream cinemas. Years before Peter Jackson and Ang Lee experimented with high frame rates, Douglas Trumbull was making it work in the analog world

Magicam, meanwhile, was Trumbull’s project to create virtual sets decades before we could use computer-generated keying, simply by blue-screening actors in front of a live miniature, shot at the same time with motorized cameras. The technique would have offered the ability to shoot huge, effects-heavy spectacles on a tiny budget and in a very small studio. The technology was expected to be the lynchpin of Harlan Ellison’s infamous TV series The Starlost and its failure then contributed to its demise. But Magicam would, not long after, be used in a variety of Trumbull productions including Carl Sagan’s Cosmos.

His energies elsewhere, Trumbull was unable to accept offers to produce the effects for Star Wars but returned to the industry for Close Encounters of the Third Kind. It would be on this film that he would be nominated for his first Academy Award and helped pioneer work to shoot effects sequences on 70mm film. This was a way of preserving detail when the footage was then integrated into sequences shot on 35mm, which is why the alien spaceship has so much heft and weight.

As work was progressing on Close Encounters, Paramount offered to bankroll his studio and asked him to produce the effects for Star Trek: The Motion Picture. Trumbull initially turned down the offer, causing much consternation from Paramount Pictures. But after the film’s first effects house, Robert Abel was deemed to have produced substandard work, Trumbull was more or less begged to come on and finish the film ahead of its planned release date.

In the following clip, from 2016, reveals the painstaking process behind creating the Enterprise drydock sequence from The Motion Picture. He said that, in many ways, the sequence – which is adored by fans and detested by casual viewers – was inspired by work done for 2001. One thing that sticks out is that he says that he wanted fans to “buy into the beauty of space” and “buy into the beauty of the Enterprise,” to fall in “love” with the revised craft. And, it works.

Before his passing, Trumbull was consulting with the team overseeing the 4K remaster of Star Trek: The Motion Picture. Producer David C. Fein, who is leading the project, said that “Doug created the future,” and that he “inspired going beyond limitations,” adding that Trumbull’s “influence will be with us forever.” Similarly, Mike Matessino added that Trumbull’s work was “truly timeless,” which “continues to inspire awe and to spark the imagination,” both now and in the future.

Daren R. Dochterman, who spent a lot of time working with Trumbull, said that he was scared to meet him the first time they met. “The fact that he turned out not only to be a sweet, understanding man and a very kind teacher not only surprised me but filled me with such happiness,” he added. “Over the years since then I’ve gotten to know him a little better and he had gotten to know some of my work, and he was the most encouraging voice in my life.”

I am shattered to learn that visual effects legend Douglas Trumbull has passed away. Trumbull worked on 2001, Close Encounters, Star Trek: TMP, Blade Runner, and more. He directed Silent Running and Brainstorm. He was an artist and an innovator and a personal hero. He was 79. 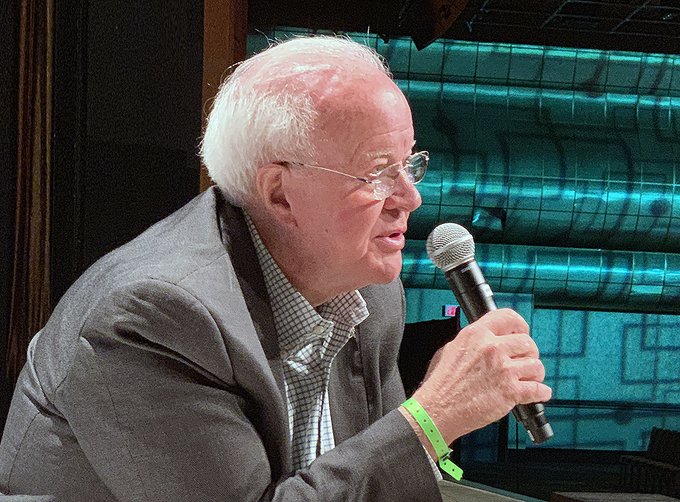 Trumbull’s work on Close Encounters would massively inform the visual effects work for Blade Runner. That film would earn him his third Academy Award nomination, a well-deserved effort for simply giving Ridley Scott’s world the weight and heft that it required. Here, like in so many other of his films, Trumbull’s effects offer a level of realism that means it’s easy to suspend your disbelief when you see the fantastic presented to you.

In fact, that’s the second time I’ve used the phrase “heft and weight” in this piece, isn’t it – because that is something Trumbull was always able to get right. His worlds, no matter how fantastic, always felt grounded, and that’s why his work holds up so well compared to other films both of the era, and even those that followed it. Trumbull knew how to make the fantastical feel real, a commodity that is worth more than its weight in Hollywood.

Unfortunately, Trumbull would leave production on Blade Runner before it was completed to helm his second film, Brainstorm. That was designed as a showcase for Showscan, embracing higher frame rates and using those big 70mm cameras. Unfortunately, studio pressure, the tragic death of one of the film’s stars, and cold feet from exhibitors killed Trumbull’s dream. The film didn’t get a wide release and ultimately flopped, leaving Trumbull to move back east to work on his technology passions away from Hollywood. He would also, briefly, be at IMAX in the early ‘90s.

In later years, Trumbull consulted on visual effects for Terence Malick’s The Tree of Life and worked on his Magi cinematic process. Magi, unlike other HFR projects, runs at 120 frames per second, and the reports, like this RogerEbert.com story from 2014, suggesting it lacked the TV-esque effects that so dogged the Hobbit movies. By 2017, Trumbull was hoping to build a pod that could be used to tour Magi-produced films and bring the gospel of higher frame rates to the world.

On February 8th, Amy Trumbull posted to Facebook that her father passed away after a two-year battle with cancer, a brain tumor, and a stroke. “He was an absolute genius and a wizard and his contributions to the film and special effects industry will live on for decades and beyond.” The outpouring of love from both people inside and outside Hollywood was instantaneous.

Daren R. Dochterman said it best, that Douglas Trumbull was “constantly a force trying to pull the movie business into the future with brand new ways of telling stories.” And while “the [Hollywood] machine chewed him up and spit him out … Doug’s tenacity at trying to create new technologies and new methods for creating images and experiences was something that he tried to provide all his life.”