Banjo Patterson as a baby with his Wiradjuri nanny, Fanny Hopkins.

Much is known about European settlement in the Central West of New South Wales once the mountains were traversed in 1813.

But perhaps not as widely understood are the coexisting arrangements of the first people of the region, in the face of sudden colonial occupation.

This Curious Central West looks into 19th century Wiradjuri, their survival, and their influence on the new settlements.

Europeans followed an Aboriginal highway over the Blue Mountains using a track that is now the Great Western Highway.

The initial relations between the new settlers and Wiradjuri were widely reported to be peaceful, with the Wiradjuri sharing their food and resources with the new arrivals.

However, a misunderstanding over a potato harvest tipped the squatters and Wiradjuri into an all-out war.

Dennis Foley, professor of Indigenous entrepreneurship at the University of Canberra, said the modern-day Bathurst Showground was a rich yam pasture where alluvial soil flooded regularly.

"The yams weren't just growing they're wild, they were re-dug and harvested. That whole area was beautiful yam. It was shared with the first explorers, then the first settler came in," Professor Foley said.

"He saw, 'well yams grow, potatoes will grow. So they grew their potatoes and along come the local clan and they thought, 'well we shared the yams with you, let's borrow a few potatoes'.

"People were killed, and it was all over this misunderstanding of sharing." The complex nature of frontier relations

Violence burned like a grassfire through Wiradjuri country and a struggle for control over land and women raged between European and Wiradjuri men.

Smallpox decimated the Wiradjuri population, with many forced to flee the disease by escaping over the mountains, and massacres were commonplace.

In a bid to secure their safety, displaced Wiradjuri would seek refuge on the larger stations, establishing a pattern of fraught and often conflicting symbiotic relationships.

"As pastoralism spread throughout the west there were fewer and fewer places for Aboriginal people to live," Dr. Bennett said.

"What tended to happen, after that period of frontier violence had ended, is that Aboriginal people would end up camping on properties of pastoralists who were a little bit more sympathetic.

"The frontier period was bloodthirsty and it was terrible, but this was a way Aboriginal people could survive," Professor Foley said.

Intermarriage occurred during this period as pastoralists, convicts and settlers took Aboriginal wives and raised Aboriginal children, which furthered the complex nature of frontier relationships.

"They [Irish convicts] were being treated by the British as badly as we [the Wiradjuri] were, so there was a commonality there," Professor Foley said.

"You can see those links; the Irish boys obviously picked up and married the Aboriginal women and that's how you've got so many crossed marriages in a lot of our families."

The concept of kinship is important to Wiradjuri society and explains the migration and marriage movement.

"The descendants of mixed unions continued to marry into established Aboriginal families."

White settlers were unfamiliar with the land and relied on Aboriginal knowledge to establish their properties, meaning homesteads were built on Wiradjuri campsites — places that were sheltered had clear water, and were safe from flooding. 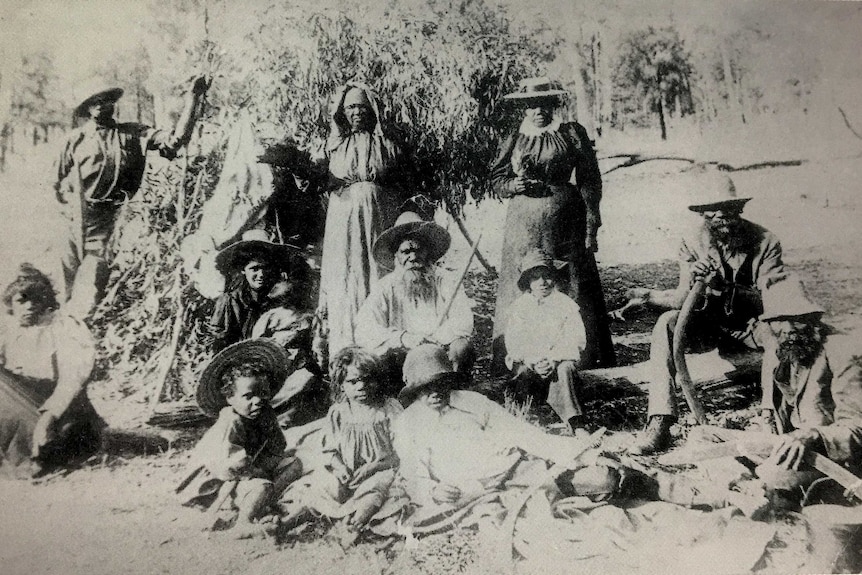 Bogan River Wiradjuri in 1898. John 'Genanagie Jack' Gilmour sits at the centre with a white beard. He took his name from John Gilmour, owner of Genanagie Station.

"Goonoo Homestead [in Yeoval] was a sacred area. It's a bend in a river and that's where the Wiradjuri all camped," Dr. Foley said.

"A squatter came along and built his house there. The house is still there, but the village is gone.

"When you look across the river you can still see the remains of the Aboriginal camps, that's not hard to envision — the different flat areas, the middens. It's a really interesting place."

As well as homesteads, whole towns were established over Wiradjuri campsites to have access to the resources.

"Molong was settled on a major Aboriginal site and it had clear water and it was a junction of all these roads.

"You've got to remember — all these highways that criss-cross the landscape, they are following Aboriginal trails."

"It's not as if an explorer blazed through the wilderness. They just followed a track."

Churches — both Catholic and Protestant — were built on Bora Rings which were sacred dance and initiation sites.

Originally a sign of dominance or eradication, the churches being built there later ensured their survival, much like the Wiradjuri's new living arrangements grimly ensured theirs.

Aboriginal labour became increasingly valuable to pastoralists, especially during the gold rush when white labourers abandoned their jobs on farms.

Large stations swelled to villages where Wiradjuri and white people lived and worked together, though unequally. Professor Foley can list many.

"On the Molong Road, you have South Welling, Baker's Swamp.

"Most of these places don't exist anymore."

"[But] they were all fairly large size villages, but they had a high incidence of Aboriginal workers and Aboriginal labour"

Wiradjuri women were as hardworking as men, and many shepherds were women. Wiradjuri station employees on the upper Bogan, most likely en route to church. Circa 1897.

"Whilst some of the squatters were quite rough, there were some other squatters that were quite good." Dr Foley said.

"There was a Welsh guy and he got on very well with the Aboriginal people."

"In fact, his first shepherds were Aboriginal."

Buckinbah Station in Yeoval, most famous for being the birthplace of Banjo Patterson, was another station with a reputation as being a safe place for Wiradjuri people in the early 1800s.

Banjo Patterson's nanny was a Wiradjuri girl of sixteen, known only as Fanny.

Going where the work is

Labour would go on to exert a huge influence on Wiradjuri movements, once traditional patterns were irrevocably fragmented.

The large pastoral stations had broken up by then, scattering Aboriginal labourers and their families.

Many were forced onto reserves, recently established by the Aborigines Protection Board — though a job elsewhere would mean they could avoid this.

"Working for Europeans became an important source of independence and status for 19th century Aboriginal people in the second half of the century," Dr Bennett said

Cowra's reserve was established in 1890, Eugowra in 1889 and Gooloogong in 1915 furthering the already massive displacement.

After 1900, no families or large groups of workers camped together.

A sense of place

Mr Lovett along with fellow Parkes elder Geoff Anderson are painstakingly piecing Wiradjuri place names back together after so much was lost.

To the Wiradjuri, a place is defined by sunlight casting deeper shadows in the afternoon.

The arc of a river. A flower appearing multiple times. The peculiar flatness of a rock.

It's a different way of thinking of place — there is no town or town centre.

"My thing is getting into the minds of those traditional ways of thinking," Mr Lovett said.

"Actually going to the actual spot, and saying 'oh yeah I do see that one area's that's flat, it's a bit worn here'… and so on. It's the meaning behind that.

"You have to be in that one spot to actually know the ways of thinking around the naming of that area."

"So that changes a whole area — visually — what you see." Lionel Lovett, back row, centre and Geoff Anderson, back row, left with a Wiradjuri language class in Parkes.

Mr Anderson and Mr Lovett are decoding Wiradjuri language and placenames, mangled over 200 years of colonisation.

"We'll work it out between us," Mr Anderson said.

"But we didn't have the wild dog in the Parkes area. Why do we have the word Waddagal?

"How that word came about is the behaviour of white man's tongue. How they perceive the word."

"So it makes it very hard for us. We have to go back out on country and go 'what's here?'"

The central west is a cradle of civilisations and connections lost.

But Professor Foley believes that history has a way of being the great leveller.

"All the Aboriginal history has been eradicated, the scar trees have gone."

"But several waves of white or non-Indigenous history has also been eradicated and that's what's really interesting.

"But the land remains, the trees are coming back."

"A lot of scrub is coming back — prickly pear and god knows what else — but the beauty of the land remains."

"And it's such a beautiful country."