A trove of more than a thousand dinosaur teeth in the Sahara Desert confirms that the largest carnivorous dinosaur on record spent most of its time in the water.

Larger than the Tyrannosaurus, the 50-foot, seven-ton Spinosaurus lived in North Africa some 95 to 100 million years ago.

With a limited fossil record to analyze, scientists have long believed it was a land dweller.

But the discovery of a Spinosaurus tail in the prehistoric Kem Kem riverbeds in Morocco, reported in April in the journal Nature, bolstered the theory that Spinosaurus was semiaquatic and used the appendage to move through the water like an oar.

Now researchers have identified hundreds of Spinosaurus teeth in the same riverbeds, confirming the giant lizard was a real-life 'river monster.''

According to their report, published in the journal Cretaceous Research, the massive predator was the most common dinosaur in the Kem Kem, which flowed through the Sahara 100 million years ago.

Scientists from the University of Portsmouth say the Spinosaurus teeth were easy to identify from among the 1,200 dental remains discovered in the Kem Kem.

'They have a smooth round cross section which glints when held up to the light,' said researcher Aaron Quigley.

Some 1,200 teeth were sorted by species and nearly half were from Spinosaurus.

'The huge number of teeth we collected ... reveals that Spinosaurus was there in huge numbers, accounting for 45 percent of the total dental remains,' said University of Portsmouth paleobiologist David Martill. 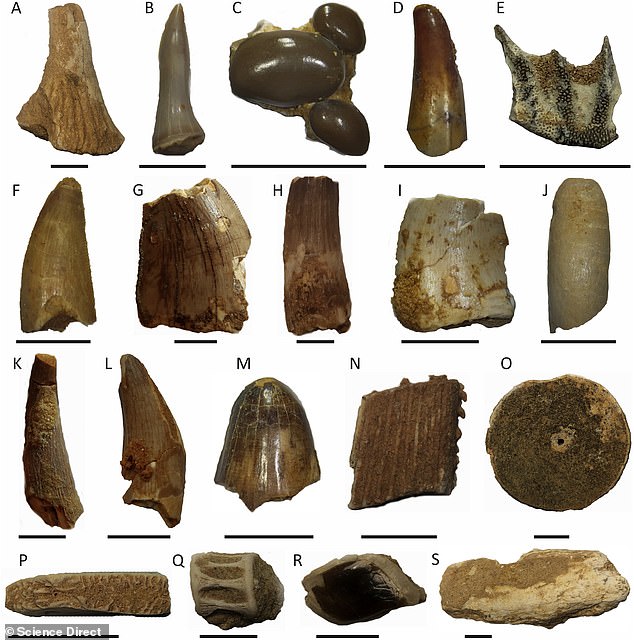 A team from the University of Portsmouth recovered more than 1,200 dinosaur teeth from the Kem Kem riverbeds in Morocco and nearly half belonged to Spinosauruses. That abundance, researchers say, 'is a reflection of their aquatic lifestyle'

That abundance 'is a reflection of their aquatic lifestyle,' Martill added.

Terrestrial dinosaurs constituted less than one percent of the dental fragments at one Kem Kem site, and barely 5 percent at another, according to the report.

'An animal living much of its life in water is much more likely to contribute teeth to the river deposit than those dinosaurs that perhaps only visited the river for drinking and feeding along its banks,' Martill said.