Singapore: It's the terrible outcome that was feared inevitable when a submarine vanished off the coast of Bali three days ago. 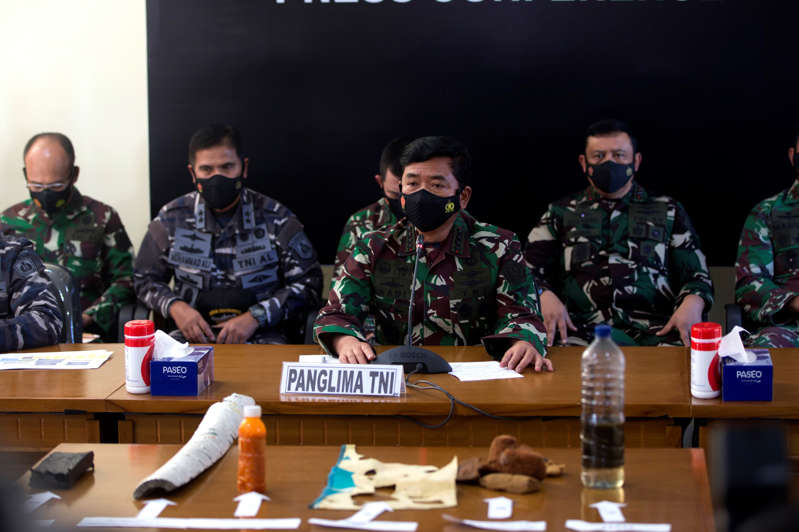 Indonesian Military chief Hadi Tjahjanto, center, talks to the media as they display debris found in the waters during a search for The Indonesian Navy submarine KRI Nanggala at Ngurah Rai Military Air Base in Bali, Indonesia on Saturday, April 24, 2021. Indonesia’s navy on Saturday said items were found from a missing submarine, indicating the vessel with 53 crew members had sunk and there was no hope of finding survivors.

Indonesia's navy on Saturday announced that debris from its missing KRI Nanggala 402 submarine had been found in the search area, with items including prayer rugs, a grease bottle for oiling the periscope, and a torpedo straightener.

With 53 personnel on board - 49 crewmen, three gunners, and the commander - the submarine has been declared likely to have sunk in what would be a national tragedy for Indonesia and for the families of the sailors.

The submarine disappeared in the early hours of Wednesday during a diving manoeuvre that was part of a training exercise.

"In last few days we found debris and things from the sub [near where] it was about to dive," navy chief Admiral Yudo Margono said.

"These are believed to be the components attached to the sub and will not come out from the sub without any pressure from the torpedo. They are floating.

"We are convinced they belong to the KRI Nanggala 402. These things do not belong to common people, were within the radius of 10 nautical miles [of where the submarine last made contact] and there were no other vessels sailing.

"We cannot guess about the condition of [the crew]. You can evaluate by yourselves based on these objects."

The navy believes the submarine has sunk to a depth of 850 metres below the surface, way beyond its maximum operating capacity or crush depth of 500 metres. Although acknowledging a miracle would be needed for anyone to have survived, the navy chief said the multinational search effort, which has been aided by Australia, would continue.

"We are preparing medical evacuation for the crews who may still possibly be safe," Margono said.

The navy believed the 42-year-old diesel-powered vessel may have suffered a blackout and said in that scenario there was only sufficient oxygen supply to last for three days.

That period expired at 3 am local time (6 am AEST) on Saturday but search crews had refused to give up hope, with ships from Singapore and Malaysia rushing to the scene to join Indonesian warships and helicopters. Australia's sonar-equipped HMA Ballarat frigate joined the rescue bid on Friday.

Despite the discovery of debris, the navy chief said that if the submarine had not suffered a power outage and crew members remained alive, then there would be enough electricity to produce oxygen for five days or until early Monday morning.

The estimated coordinate point for the submarine was 3.2 kilometres from where it set off for its dive.

Margono said that based on the items that were found to have emerged from the submarine, the vessel had sustained "cracks due to the pressure from the depth of 700 metres to 800 metres".

"These things came out while they were actually installed inside [the submarine], particularly the item for holding the torpedo. The fact that it came out ... it means there were huge cracks," he said.

The HMAS Ballarat, which had been on deployment in the region and was sent urgently to the search site, has been heavily involved in the search due to its ability for underwater detection. Margono said it had found detected an object of some kind via sonar on Friday night, as did Indonesia's KRI Rigel warship and other vessels.

If the submarine's location is confirmed, a remotely operated submersible vessel attached to Singapore's MV Swift Rescue ship would be deployed, he said. It can travel to a depth of 1000 metres.

The German-built KRI Nanggala 402, one of two of its kind in Indonesia's fleet of five submarines, entered active service in 1981 but was refurbished in South Korea between 2010 and 2012.