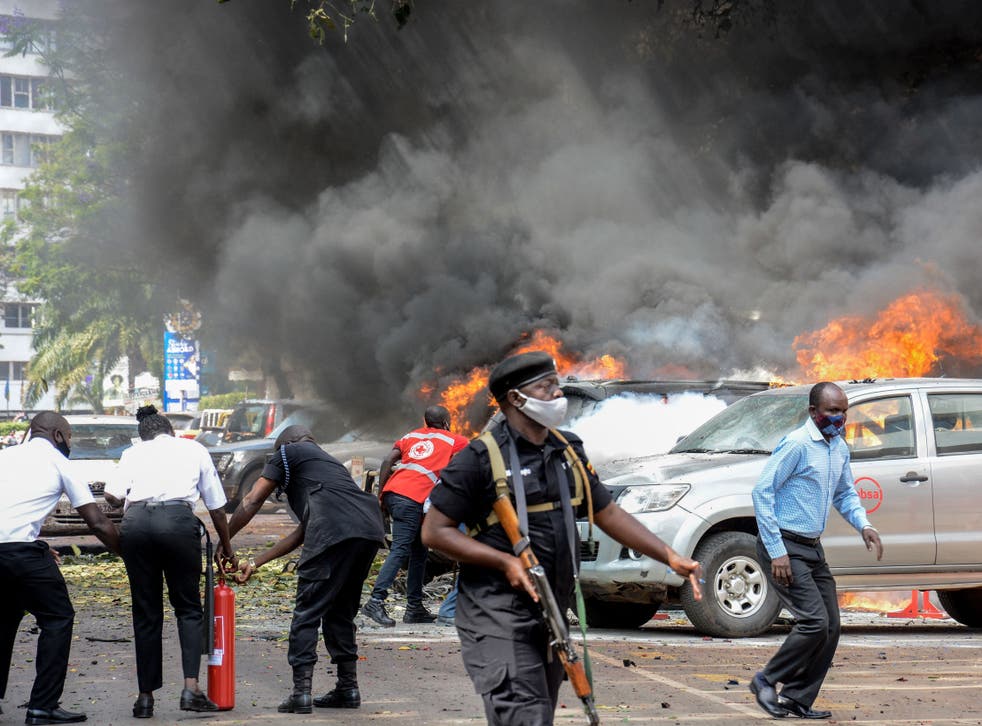 Suicide bombers on motorbikes caused an explosion near the parliament

Police described them as a coordinated attack by extremists opposed to the government.

The explosions, which occurred within minutes of each other, caused chaos in Kampala as residents fled, and left “bodies shattered and scattered”, he said.

The Ugandan Red Cross said 21 of the 33 people wounded were police officers.

A possible attack on a third target was foiled by police who pursued and disarmed a suspected suicide bomber, Mr. Enanga said.

Ugandan President Yoweri Museveni tweeted that the attacks were carried out by "manipulated and confused" youths who were being hunted down by the security.

“The terrorists invited us and we are coming for them,” he said.

“The public should maintain vigilance of checking people at entry points to bus parks, hotels, churches, mosques, markets,” he said.

The IS group claimed responsibility for the blasts, according to Site Intelligence, which tracks the online activities of extremist organisations.

The police earlier blamed the Allied Democratic Forces (ADF), an armed group active in the eastern Democratic Republic of Congo, which has been blamed for two explosions in Uganda last month and which Washington has linked to Isis.

Even before those attacks, the UK government had updated its Uganda travel advisory to say extremists were very likely to try to carry out attacks in the East African country.

Uganda, which is predominantly Christian and where Muslims make up about 14 percent of the population, has also blamed the group for a foiled bombing in August on the funeral of an army commander who led a major offensive against al-Shabab militants in Somalia.

The ADF, which opposes the rule of long-time president Mr. Museveni, is considered by experts to be the bloodiest of more than 120 armed groups that roam eastern DRC and have been accused of killing thousands of civilians.

In April 2019, Isis began on social media to claim some ADF attacks, presenting the group as its regional branch - the Islamic State Central Africa Province, or Iscap.

In March this year, the US officially linked the ADF to Isis.