That's right Facebook has found a new way to make money from you its users.

Facebook is testing a Nextdoor clone that generates neighborhood groups, activities, and goods being sold in your area

Facebook is going hyperlocal with a new feature that appears to be a copycat of the popular community-based social networking app Nextdoor.

Called Neighborhoods, Facebook is currently testing it in Calgary, Canada, with no word on when or if it would launch widely.

Users turn on their location to see posts, groups, and marketplace items from individuals and businesses in their immediate area and possibly receive hyperlocal advertising.

You can also create a unique Neighborhood profile by entering your address, allowing you to share details with others nearby without friending them.

According to screenshots tweeted by industry insiders Matt Navarra and Leon Grigg, Neighborhood appears as a tile on the Facebook app, next to Marketplace, Groups, and Friends. 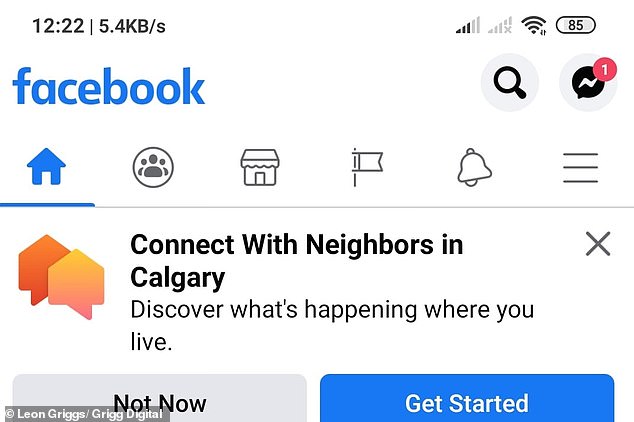 Facebook is testing Neighborhoods in Calgary, Canada. The feature allows users to see posts, groups, and marketplace items from nearby individuals and businesses

'More than ever, people are using Facebook to participate in their local communities,' a company spokesperson said in a statement.

'To help make it easier to do this, we are rolling out a limited test of Neighborhoods, a dedicated space within Facebook for people to connect with their neighbors.'

A number of screenshots were shared by Navarra that suggests a certain amount of users must first sign up before the feature creates a Neighborhood.

Users can also share information about themselves in their Neighborhoods Profile that can be displayed for others in the area to see.

By turning on their location, Facebook users let Neighborhoods confirm their locale. Mark Zuckerberg has repeatedly said he wants communities to be central to the Facebook experience, but critics have accused apps like Nextdoor of  devolving into racial profiling

Users are encouraged to add a brief bio and post about favorite places and local activities. Details will only be visible to other users in their Neighborhood and Neighborhoods they select

This includes at least one interest they have and 'a favorite place to connect with like-minded neighbors.'

'We're going to make communities as central to the Facebook experience as friends and family,' CEO Mark Zuckerberg said at the 2020 Facebook Communities Summit.

Nextdoor is a particularly tempting target, as the use of the app has skyrocketed nearly 80 percent during the pandemic.

The 12-year-old company is considering going public, according to Bloomberg News, with a valuation approaching $5 billion and is said to be eyeing a public listing.

Critics have routinely accused Facebook of being anti-competitive and stealing features from rivals.

In July, Zuckerberg told the House Antitrust Subcommittee the company has 'certainly adapted features that others have led in.' 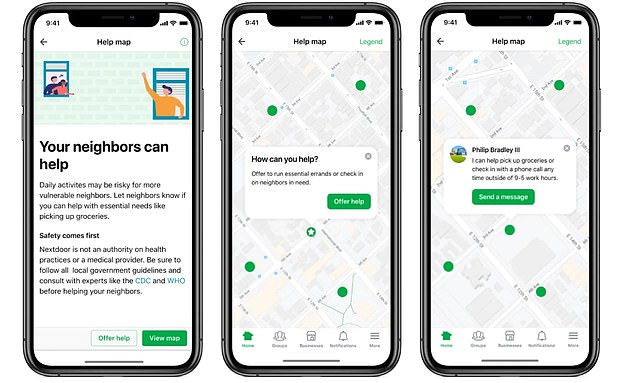 Nextdoor is a particularly tempting target, as use of the app has skyrocketed nearly 80 percent during the pandemic

He denied the company used such tactics to pressure competitors to sell to Facebook.

However, the social media giant does have a record of copying services that are trying to break ground in the market.

The first, and maybe most famous, was when Facebook took a page from Snapchat by adding 'Stories' to both its main platform and Instagram.

And most recently, Facebook rolled out Reels on Instagram that mimics TikTok - it allows users to create longer videos that can be edited and shared.

The social-media giant is getting into the hyperlocal-community game just as apps like Nextdoor and Citizen are being labeled hotbeds of racism.

Nextdoor, which serves more than 268,000 communities globally, was initially envisioned as a place to ask for babysitter recommendations or sell used furniture.

But increasingly users have taken to the app to share anxious alerts about people of color in their neighborhood.

Delia Christina, a San Francisco resident tweeted she gave up on Nextdoor after her neighbors would write messages like, 'Saw a black youth hanging out next door. Calling the cops,' NPR reported.

Miranda Mickiewicz, a Nextdoor user in Oakland, held a meeting with her neighbors after seeing too many warnings that 'suspicious' black people were in the area.

'There seems to be a culture of fear on Nextdoor, where anytime someone feels fear, they call the police,' Mickiewicz told Splinter. 'This is a misplaced solution to feeling fear because it can have really serious consequences.'

Facebook is at least aware of the pitfalls, reminding Neighborhoods users to follow its community guidelines and 'be kind,' 'be inclusive' and 'keep it clean.'