A marble is a small spherical object often made from glass, clay, steel, plastic, or agate. These balls vary in size. Most commonly, they are about 13 mm (1⁄2 in) in diameter, but they may range from less than 1 mm (1⁄30 in) to over 8 cm (3 in), while some art glass marbles for display purposes are over 30 cm (12 in) wide. Marbles can be used for a variety of games called marbles. They are often collected, both for nostalgia and for their aesthetic colors. In the North of England, the objects and the game are called "taws", with larger taws being called bottle washers after the use of a marble in Codd-neck bottles, which were often collected for play. These toys can be used to make marble runs, a form of art, or they can be used in marble races.

A Codd-neck bottle is a type of bottle used for carbonated drinks. It has a closing design based on a glass marble which is held against a rubber seal, which sits within a recess in the lip. 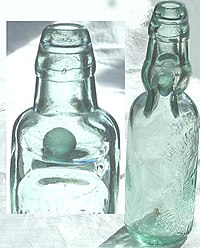 In the early twentieth century, small balls of stone from about 2500 BCE, identified by archaeologists as marbles, were found by excavation near Mohenjo-Daro, in a site associated with the Indus Valley civilization. Marbles are often mentioned in Roman literature, as in Ovid's poem Nux (which mentions playing the game with walnuts), and there are many examples of marbles from excavations of sites associated with Chaldeans of Mesopotamia and ancient Egypt. They were commonly made of clay, stone, or glass. Marbles arrived in Britain, imported from the Low Countries, during the medieval era. 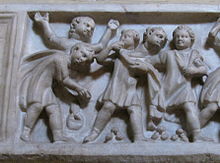 In 1503 the town council of Nuremberg, Germany, limited the playing of marble games to a meadow outside the town.

It is unknown where marbles were first manufactured. A German glassblower invented marble scissors, a device for making marbles, in 1846. Ceramic marbles entered inexpensive mass production in the 1870s.

The game has become popular throughout the US and other countries. The first mass-produced toy marbles (clay) made in the US were made in Akron, Ohio, by S. C. Dyke, in the early 1890s. Some of the first US-produced glass marbles were also made in Akron, by James Harvey Leighton. In 1903, Martin Frederick Christensen—also of Akron, Ohio—made the first machine-made glass marbles on his patented machine. His company, The M. F. Christensen & Son Co., manufactured millions of toy and industrial glass marbles until they ceased operations in 1917. The next US company to enter the glass marble market was Akro Agate. This company was started by Akronites in 1911 but is located in Clarksburg, West Virginia. Today, there are only two American-based toy marble manufacturers: Jabo Vitro in Reno, Ohio, and Marble King, in Paden City, West Virginia. 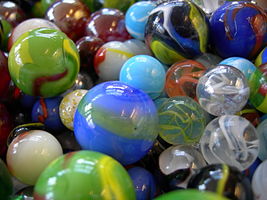 Marbles of different sizes and types

The British and World Marbles Championship has been held at Tinsley Green, West Sussex, England, every year since 1932. (Marbles has been played in Tinsley Green and the surrounding area for many centuries: TIME magazine traces its origins to 1588. Traditionally, the marbles-playing season started on Ash Wednesday and lasted until midday on Good Friday: playing after that brought bad luck. More than 20 teams from around the world take part in the championship, each Good Friday; German teams have been successful several times since 2000, although local teams from Crawley, Copthorne, and other Sussex and Surrey villages often take part as well; the first championship in 1932 was won by Ellen Geary, a young girl from London. 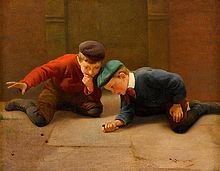 There are various types of marbles, and names vary from locality to locality. 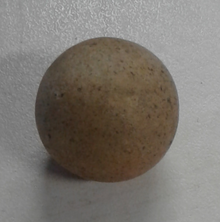 A clay marble, found in a field in the East Midlands 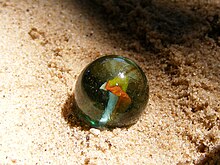 An orange and white toothpaste marble 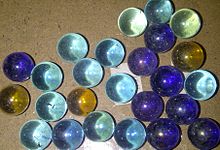 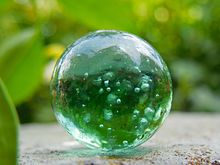 A green glass marble in India

Art marbles are high-quality collectible marbles arising out of the art glass movement. They are sometimes referred to as contemporary glass marbles to differentiate them from collectible antique marbles and are spherical works of art glass.

Collectible contemporary marbles are made mostly in the United States by individual artists such as Josh Simpson.

Art marbles are usually around 50 millimetres (2.0 in) in diameter (a size also known as a "toe breaker") but can vary, depending on the artist and the print. 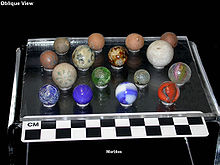 Marble players often grow to collect marbles after having outgrown the game. Marbles are categorized by many factors including condition, size, type, manufacturer/artisan, age, style, materials, scarcity, and the existence of original packaging (which is further rated in terms of condition). A marble's worth is primarily determined by the type, size, condition, and eye appeal, coupled with the law of supply and demand. Ugly, but rare marbles may be valued as much as those of very fine quality. However, this is the exception, rather than the rule, and normally "condition is king" when it comes to marbles. Any surface damage (characterized by missing glass, such as chips or pits) typically cuts book value by 50% or more.

Due to the large market, there are many related side businesses that have sprung up such as numerous books and guides, websites dedicated to live auctions of marbles only, and collector conventions. Additionally, many glass artisans produce art marbles for the collectors' market only, with some selling for thousands of dollars.

Marbles are made using many techniques. They can be categorized into two general types: hand-made and machine-made.

Marbles were originally made by hand. Stone or ivory marbles can be fashioned by grinding. Clay, pottery, ceramic, or porcelain marbles can be made by rolling the material into a ball, and then letting dry, or firing, and then can be left natural, painted, or glazed. Clay marbles, also known as crock marbles or commies (common), are made of slightly porous clay, traditionally from local clay or leftover earthenware ("crockery"), rolled into balls, then glazed and fired at low heat, creating an opaque imperfect sphere that is frequently sold as the poor boy's "old-timey" marble. Glass marbles can be fashioned through the production of glass rods which are stacked together to form the desired pattern, cutting the rod into marble-sized pieces using marble scissors, and rounding the still-malleable glass. 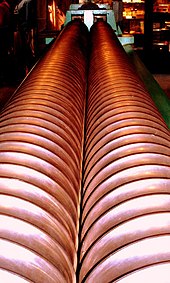 One mechanical technique is dropping globules of molten glass into a groove made by two interlocking parallel screws. As the screws rotate, the marble travels along them, gradually being shaped into a sphere as it cools. Colour is added to the main batch glass and/or to additional glass streams that are combined with the mainstream in a variety of ways. For example, in the "cat's-eye" style, coloured glass veins are injected into a transparent mainstream. Applying more expensive coloured glass to the surface of cheaper transparent or white glass is also a common technique.

There were a lot of businesses that made marbles in Ohio. Currently, the world's largest manufacturer of playing marbles is Vacor de Mexico. Founded in 1934, the company now makes 90 percent of the world's marbles. Over 12 million are produced daily.