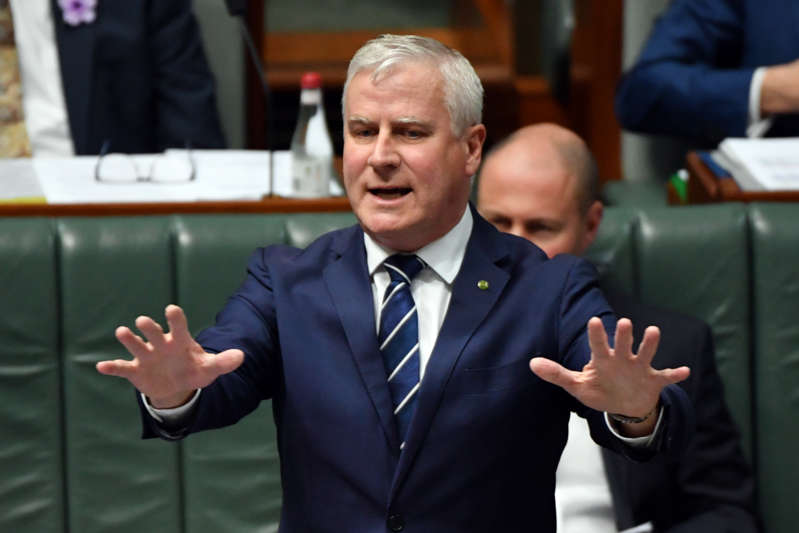 Deputy Prime Minister Michael McCormack during Question Time in the House of Representatives at Parliament House in Canberra, Wednesday, May 26, 2021.

Deputy Prime Minister Michael McCormack has insisted the vaccine rollout is "not a race" despite warnings over missed vaccination targets and Labor accusations of government complacency.

Mr. McCormack defended the government's vaccine policies on Sunday morning by telling Sky News the rollout had to be "systematic" and echoing claims from Prime Minister Scott Morrison that it was not a race.

Labor leader Anthony Albanese has accused the government of failing Australians by not doing enough to protect people from COVID-19, including missing its original targets for the vaccine program.

Asked on Sunday morning whether Mr. Morrison had made a mistake by saying the vaccine rollout was not a race, Mr. McCormack backed the Prime Minister's argument.

"It's not a race - it has to be systematic, it has to be rolled out in a way that Australians obviously need to know that they have to get the jab," he said.

When Sky News host Kieran Gilbert asked Mr. McCormack again about the need for urgency and the risks of vaccine hesitancy, the Deputy Prime Minister cited daily figures showing people were getting vaccinated.

"We're getting the vaccinations done - 4.1 million already. I urge and encourage Australians listening and watching this show to make sure that when they're able to do so, eligible to do so, to get that first jab and to follow it up with the second."

But Mr. Morrison said in January he expected four million Australians vaccinated by the end of March, in a timetable issued before the European Union stymied exports of the AstraZeneca vaccine.

Mr. Albanese and Labor health spokesman Mark Butler have stepped up accusations in recent days that the government was complacent about the rollout when it needed greater urgency and action.

"It is a race against time for us to get the vaccine rollout right. And for us to get quarantine right. They're the two jobs that Scott Morrison had this year, and he has failed dismally on both," Mr. Albanese said on Saturday.

Greens leader Adam Bandt rebuked the government for disputing the need for a faster vaccine rollout.

"It is a race and with the government, in the driver's seat Australia is losing the race," he said.

Victorian Acting Premier James Merlino rejected the federal view and said a successful vaccine program was the path out of the pandemic but the commonwealth's vaccine program had been delayed.

"We could do more but you've got to have some long-term confidence in the supply of the vaccine," Mr. Merlino said on Sunday.

Trade Minister Dan Tehan defended Mr. McCormack soon after the Sky News interview by telling ABC's Insiders program the rollout should not be called a race.

"You don't describe a vaccine rollout as a race. The Melbourne Cup is a race, the Stawell Gift is a race," Mr. Tehan said.

"When it comes to vaccine, what we need to do is make sure we can get as many people vaccinated as quickly as we possibly can."