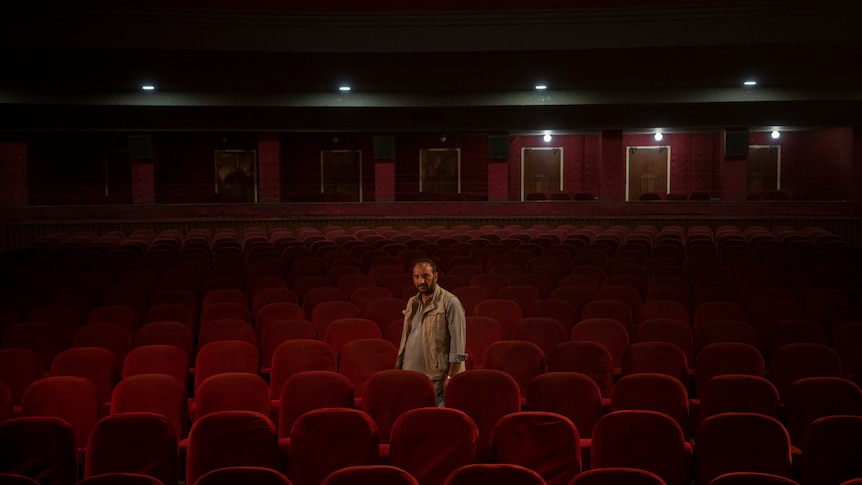 After seizing power three months ago, the Taliban ordered cinemas to stop operating.

The cool 1960s-style lines of the Ariana Cinema's marquee stand out over a traffic-clogged roundabout in downtown Kabul.

For decades, the historic cinema has entertained Afghans and borne witness to Afghanistan's wars, hopes, and cultural shifts.

Now the marquee is stripped of the posters of Bollywood movies and American action flicks that used to adorn it. The gates are closed. The Ariana's employees are government workers and remain on the payroll.

After recapturing power three months ago, the Taliban ordered the Ariana and other cinemas to stop operating.

The Islamic militant guerrillas-turned-rulers say they have yet to decide whether they will allow movies in Afghanistan.

Like the rest of the country, the Ariana is in a strange limbo, waiting to see how the Taliban will rule.

The cinema's nearly 20 employees, all men, still show up at work, logging in their attendance in hopes they will eventually get paid.

The landmark Ariana, one of only four cinemas in the capital, is owned by the Kabul municipality, so its employees are government workers and remain on the payroll.

The men while away the hours. They hang out in the abandoned ticket booth or stroll the Ariana's curving corridors. Rows of plush red seats sit in silent darkness.

The Ariana's director, Asita Ferdous, the first woman in the post, is not even allowed to enter the cinema.

The Taliban ordered female government employees to stay away from their workplaces so they don't mix with men until they determine whether they will be allowed to work.

Twenty-six-year-old Ms. Ferdous is part of a post-2001 generation of young Afghans determined to carve out a greater space for women's rights. Like the rest of the country, the Ariana is in a strange limbo, waiting to see how the Taliban will rule.

The Taliban takeover has wrecked their hopes. Also a painter and sculptor, she now stays at home.

"I can't do exhibitions anymore."

During their previous time in power from 1996-2001, the Taliban imposed a radical interpretation of Islamic law forbidding women from working or going to school — or even leaving home in many cases — and forcing men to grow beards and attend prayers. They banned music and other art, including movies and cinema.

Under international pressure, the Taliban now say they have changed. But they have been vague about what they will or won't allow. That has put many Afghans' lives — and livelihoods — on hold.

For the Ariana, it is another chapter in a tumultuous six-decade history.

The Ariana opened in 1963. Its sleek architecture mirrored the modernising spirit that the then-ruling monarchy was trying to bring to the deeply traditional nation.

Kabul resident Ziba Niazai recalled going to the Ariana in the late 1980s, during the rule of Soviet-backed president Najibullah, when there were more than 30 cinemas around the country.

For her, it was an entry to a different world. She had just married, and her new husband brought her from their home village in the mountains to Kabul, where he had a job in the Finance Ministry. She was alone in the house all day while he was at the office.

But when he got off work, they often went together to the Ariana for a Bollywood movie.

After years of communist rule, it was a more secular era than recent decades, at least for a narrow urban elite.

"We had no hijab at that time," said Niazai, now in her late 50s, referring to the headscarf.

Many couples went to the cinema, and "there wasn't even a separate section, you could sit wherever you wanted".

At the time, war raged across the country as Najibullah's government battled an American-backed coalition of warlords and Islamic militants.

The mujahedin toppled him in 1992. Then they turned on each other in a fight for power that demolished Kabul and killed thousands of people caught in the crossfire. The cinema's staff still show up at work every day hoping they will eventually get paid.

The Ariana was heavily damaged, along with most of the surrounding neighbourhood, in the frequent bombardments and gun battles.

It lay abandoned in ruins for years, as the Taliban drove out the mujahedin and took over Kabul in 1996. Whatever cinemas survived around Kabul were shuttered.

The Ariana's revival came after the Taliban's ouster in the 2001 US-led invasion.

The French government helped rebuild the cinema in 2004, part of the flood of billions of dollars of international aid that attempted to reshape Afghanistan over the next 20 years.

With the Taliban gone, cinema saw a new burst of popularity.

Indian movies were always the biggest draw at the Ariana, as were action movies, particularly those featuring Jean-Claude Van Damme, said Abdul Malik Wahidi, in charge of tickets.

They had three showings a day, ending in the mid-afternoon, at 50 afghanis a ticket — about 50 cents. Audiences were overwhelmingly men. In Afghanistan's conservative society, cinemas were seen as a male space, and few women attended.

Mr. Wahidi recalled how he and other staffers had to preview all foreign films to weed out those with scenes considered too racy — with couples kissing or women showing too much skin, for example.

Letting something slip through could bring the wrath of some movie-goers. Offended audiences were known to hurl objects at the screen, though it didn't happen at the Ariana, Wahidi said. Asita Ferdous is the director of the Ariana Cinema but is not allowed to enter the cinema on orders of the Taliban.

He remembered one patron at the Ariana, outraged by a scene, storming out and shouting at him, "How can you show pornography?"

Ms. Ferdous was appointed as the Ariana's director just over a year ago. She previously led the Kabul municipality's Gender Equality Division, where she had worked to gain equal pay for women employees and install women as senior officers in the capital's district police departments.

When she came to the Ariana, the male staff were surprised, "but they have been very cooperative and have worked well with me".

She focused on making the cinema more welcoming to women. They dedicated one side of the auditorium for couples and families where women could sit. Those entering the cinema had to be patted down by guards as a security measure, and Ms Ferdous brought in a female guard so women patrons would feel more comfortable.

In March 2021, the cinema hosted a festival of Afghan films that proved very popular, attended by Afghan actors who held talks with the audiences.

Now it has all been brought to a halt, and the Ariana's staff is left not knowing their fate. The male employees have received part of their salaries since the Taliban takeover.

Ms. Ferdous said she has received no salary at all.

"It is women who suffer the most. Women are just asking for their right to work," she said.

"If they are not allowed, their economic situation will only get worse."

Inanullah Amany, the general director of the Kabul Municipality's cultural department, said that if the Taliban do ban movies, the Ariana's employees could be transferred to other municipal jobs. Or they could be dismissed.

The staff said they couldn't even guess what the Taliban will decide, but none held out much hope they would allow movies.

That would be a loss, said Rahmatullah Ezati, the Ariana's chief projectionist.

"If a country doesn't have cinema, then there's no culture. Through cinema, we've seen other countries like Europe, US and India," he said.