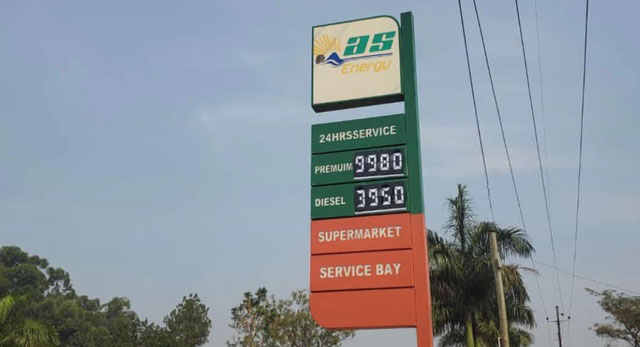 Residents in Hoima are feeling the pinch of skyrocketing fuel prices. Fuel supply in the country has been affected by a strike at the Kenya-Uganda border, at which truck drivers protested the high charges for COVID-19 tests.

Prime Minister Robinah Nabbanja reassured the country on Friday that fuel supplies will be restored to normal soon. “Government is aware of the public concerns about rising fuel prices but would like to assure the country that we are not in a crisis. The hiccup at the Malaba border was fixed. Prices should stabilize. Fuel dealers should not use this excuse to hike prices,” she said.

The situation was tense by late Friday as most fuel stations reported that they had run out of fuel forcing the prices to escalate further.

Only one petrol station situated in Kiryatete in Hoima West division had fuel in Hoima city by late Friday. Here, a litre of petrol was selling at sh12,000 and diesel at sh8,000.

A pump attendant at Stabex fuel station who spoke to URN on condition of anonymity explains that they ran out of fuel on Thursday afternoon.

Another pump attendant at Total petrol station who also spoke to URN on condition of anonymity noted that at their station, fuel got finished on Thursday evening at around 9 pm, a situation which has left motor vehicle and motorcycle owners stranded.

Meanwhile, transport fares within the city have also quadrupled in some places, while it has gone up five-fold in others.

Benon Ahebwa, a resident of Kiryatete, a Hoima suburb URN talked to wondered why fuel prices should only be hiked in Hoima yet other districts in the region are selling at sh4,590. He wants the government to intervene and investigate fuel station owners in the area.

Godfrey Sebuufu, a bodaboda cyclist at the All Saints Church stage says that he has been compelled to abandon his motorcycle due to the skyrocketing fuel prices yet he has a loan to service. He questioned how much fuel Uganda has in the fuel reserves and how long the reserve can push the country.

Micheal Bombo, a bodaboda rider at Supreme stage says he was shocked when he went to fuel his motorcycle at Kiryatete fuel station and he was told that a litre was at sh12,000 up from 4,590.

Rogers Kahumuza, a bodaboda cyclist at Post bank stage says the situation has compelled them to hike their transport fares. He says transporting a passenger from Hoima business centre to Kinubi that used to be at 2,000 Shillings is now costing 5,000 Shillings.

Mbabazi Muhereza another resident explains that the current condition is unbearable adding that the skyrocketing fuel prices could lead to an increase in the cost of other goods.

Beatrice Kyaligonza, a resident of the Kigorobya sub-county says fuel is a major driver in the economy adding that if the situation persists it could lead to an increase in the different commodity prices and other necessities.

Between October and November last year, the pump price for petrol skyrocketed from sh3,900 to sh4,600 while diesel increased from sh3,500 to 4,200. The situation compelled members of parliament to ask the government to explain to the public the reason behind the skyrocketing fuel prices across the country.

The price hikes aside, Hoima infrastructure is set for the start of drilling the first Ugandan oil in the region.

Construction of the East African Crude Oil pipeline (EACOP) project that is 1,400km will start from Hoima in Uganda to Tanga Port in Tanzania