The company says it introduced the limit to improve battery life. 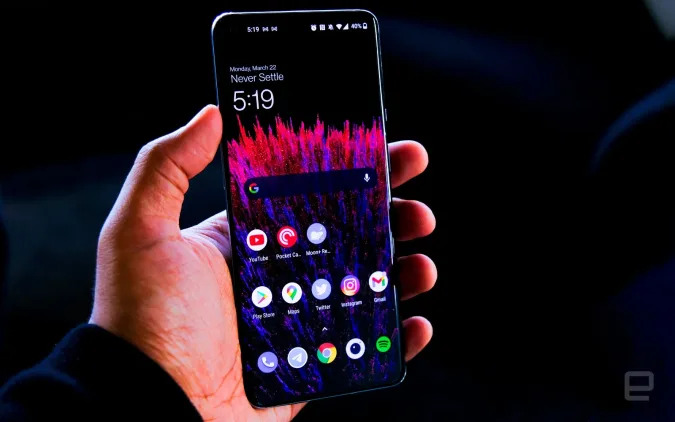 For the third time in its short history, OnePlus finds itself embroiled in a controversy over the performance of its phones. This week, AnandTech published a report in which it said it found the OnePlus 9 Pro and OnePlus 9 throttle the capabilities of their Snapdragon 888 processors when running popular apps like Chrome, Twitter, and WhatsApp. AnandTech wasn't able to suss out a complete list of all the applications where the two phones limit their CPU output, but what's notable about the outlet's findings is that the OnePlus 9 Pro and OnePlus 9 don't throttle any benchmarking tools.

After AnandTech published its report, GeekBench, one of the more popular tools for benchmarking, completed a separate investigation and went on to delist the OnePlus 9 and OnePlus 9 Pro from its charts. "It's disappointing to see OnePlus handsets making performance decisions based on application identifiers rather than application behavior," the company said. "We view this as a form of benchmark manipulation."

OnePlus has since responded to the report. It told XDA Developers it tweaked the behavior of the OnePlus 9 Pro and OnePlus 9 in response to complaints people had about the battery life.

Our top priority is always delivering a great user experience with our products, based in part on acting quickly on important user feedback. Following the launch of the OnePlus 9 and 9 Pro in March, some users told us about some areas where we could improve the devices' battery life and heat management. As a result of this feedback, our R&D team has been working over the past few months to optimize the devices' performance when using many of the most popular apps, including Chrome, by matching the app's processor requirements with the most appropriate power. This has helped to provide a smooth experience while reducing power consumption. While this may impact the devices' performance in some benchmarking apps, our focus as always is to do what we can to improve the performance of the device for our users.

If you've been following OnePlus for a while, you'll know the company is no stranger to this type of controversy. Back in the days of the OnePlus 3T, the company included code in OxygenOS that would artificially boost the clock speeds of the phone's Snapdragon processor when running certain benchmark apps. XDA caught the company doing something similar with the OnePlus 5.

On the face of things, the situation here is different. OnePlus is throttling the OnePlus 9 Pro and OnePlus 9 to save on battery life. And while most people won't notice unless they have another Snapdragon 888 device next to their phone, the company was still mispresenting the capabilities of those devices based on the fact they throttle benchmarking apps.