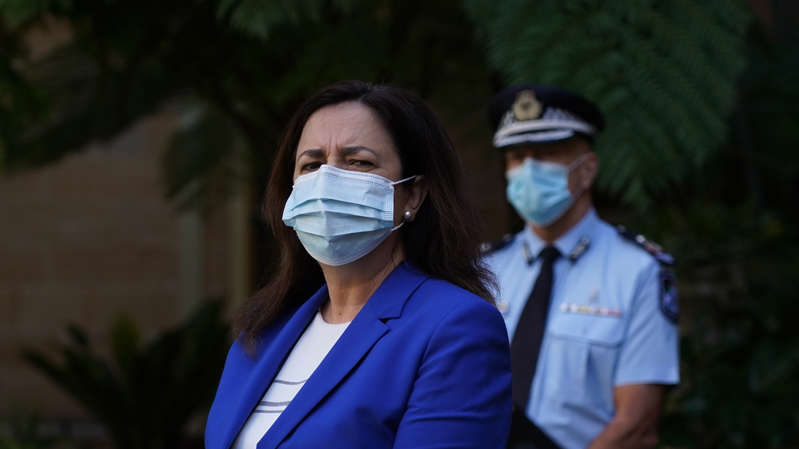 Premier Annastacia Palaszczuk at a press conference in Brisbane.

Queensland health authorities have confirmed two outbreaks of the highly infectious Delta strain of COVID-19 were detected in the southeast this week.

The announcement came as the state recorded one new locally acquired case in the mother of a 12-year-old boy whose diagnosis was made public yesterday.

Premier Annastacia Palaszczuk said the woman's case was "zero risks" to the community but confirmed she, her husband, and son have the Delta strain, which has been circulating in Sydney in recent weeks.

She said the woman was in-home quarantine.

"All three in that family are now positive," Dr. Young said.

"[It is] very tightly confirmed with that outbreak that is going on in the community down in Sydney.

"The health staff [in Sydney] will be working through how he acquired the infection while he was in hotel quarantine down there."

The second outbreak in Queensland relates to a worker at the Brisbane International Airport.

Dr. Young said she was a supervisor at the boarding gates and also tested positive for the Delta strain.

"We have already gone through CCTV footage and found 23 close contacts, 22 casual contacts and we expect there will be others," she said.

"I'm quite convinced that we have today in Queensland two new outbreaks, they are not related to all of the other outbreaks that we were dealing with.

"All of those other outbreaks [from recent weeks] we are coming towards the end of and I am very confident about those.

"We just now need to deal with these two new outbreaks which are why it is really, really important we maintain our restrictions for another seven days."

Locked down Victoria deemed a hotspot

Meanwhile, Queensland has declared Victoria a hotspot from 1:00 am tomorrow after 10 new cases were recorded there.

Ms. Palaszczuk said anyone returning to Queensland after that deadline would be forced into hotel quarantine for 14 days.

"The clear message to Queenslanders is definitely do not go to New South Wales and do not go to Victoria during this period of time," she said.

There are now 48 active cases in Queensland.