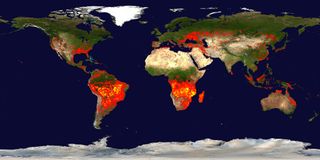 NASA's Terra satellite, with the Moderate Resolution Imaging Spectroradiometer (MODIS), captured this image of fires around the world back in 2010.

This past July was the hottest month in recorded history, but the heat isn't over. 2021 is "virtually certain" to be one of the top 10 hottest years on record, and "fire clouds" could become a summer staple, scientists revealed in a monthly briefing today (Aug. 19).

Today, in a monthly global climate report from NOAA (the U.S. National Oceanic and Atmospheric Administration), three climate scientists dove into the most up-to-date numbers and predictions surrounding Earth's changing climate. They shared how hot our planet is getting as a result of climate change, mapping out a scary future for our warming planet.

It's "virtually certain" that 2021 will be one of the top 10 hottest years on record, NOAA climatologist Karin Gleason shared in the briefing. Gleason, along with Western Regional Climate Center climatologist meteorologist Dan McEvoy, stressed that rising temperatures, droughts, wildfires, and other climate change-related problems are ravaging the U.S.

"Nine of the 10 warmest Julys have occurred since 2010," Gleason said. "And, based on our current observed anomalies during the first seven months of 2021 as well as historical, global annual temperature readings, it appears that it's virtually certain that 2021 will rank among the warmest 10 years on record."

Gleason added that, in addition to record temperatures, July also saw regions with both above and below-average precipitation. In fact, while some areas were unusually wet this summer, a whopping 47% of the contiguous U.S. is currently experiencing drought. And some regions have been stuck in drought for quite some time.

"What I want to emphasize is that, for much of the western U.S., this is now the second year in a row with drought conditions, and even longer than that for some places in some states throughout the West," McEvoy said.

But "the drought is being exacerbated by extreme heat," he added, and the pair bring with them a multitude of dangerous consequences. So, as McEvoy described, the many different factors are "very well correlated to high fire danger."

Huge wildfires have sparked around the globe, as satellite photos have shown. Just one of these fires, the Dixie wildfire in Northern California, has so far burned over 600,000 acres (243,000 hectares), and McEvoy expects it to soon grow closer to 700,000. "These fires are just exploding once they're ignited," he said.

And, in addition to extreme risk to the populations that live in fire-affected regions, destroyed infrastructure and so much more, these raging fires have also brought with them pyrocumulus clouds, or fire clouds, which are clouds that form above active fires.

"They're generating these huge pyrocumulus clouds or smoke clouds up into the atmosphere," McEvoy said. "And it's pumping incredible amounts of smoke around the western U.S. and at times, even reaching the eastern East Coast of the U.S. This is the second year in a row now we're seeing fire behavior conditions as well as air quality conditions throughout the West," he added.

While this is only the second year in a row where such massive amounts of smoke have been transported across the country and that there have been "dangerous, long-duration poor air quality events," McEvoy's slides for the briefing read, he expects the trend to continue.

"All signs really point to this becoming a more likely scenario in future summers," McEvoy told Space.com during the briefing. "Temperatures are projected to continue to warm. Precipitation variability plays a huge role here, and they'll have some wet years in the mix. But with the temperatures continuing to increase, the fuels will continue to rapidly dry out and become more flammable and be able to burn quicker and spread faster, and produce these pyrocumulus [clouds]. So we do expect more of this in the future under a warming climate."