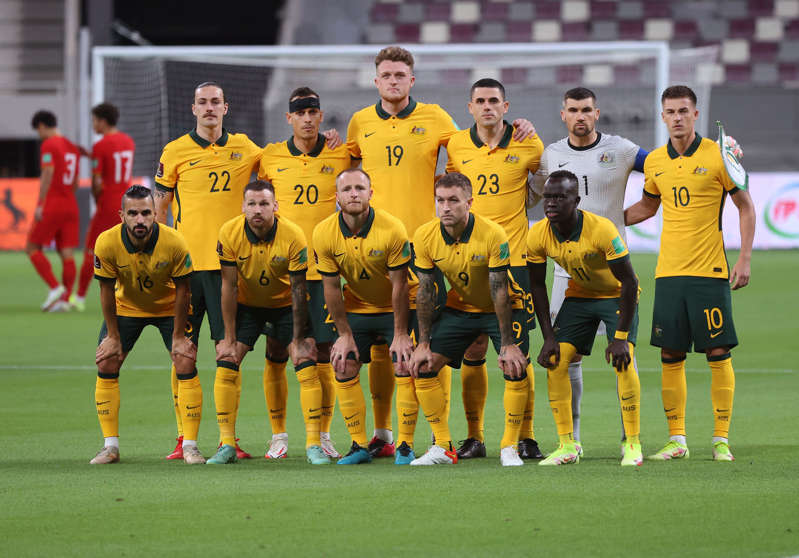 Australia's players pose for a picture during the FIFA World Cup Qatar 2022 Asian qualification football match between Australia and China, at the Qatar Sports Club stadium in Doha, on September 2, 2021.

The Socceroos have overcome a disastrous preparation to move to the top of their World Cup qualification group after thrashing China 3-0 in Doha on Friday morning.

Afforded just two training sessions, forced to relocate their home qualifier to Qatar, denied the services of at least seven domestic-based players including captain Mat Leckie and having two assistant coaches withdraw for logistical and health reasons billed this match more than a potential banana skin for the Socceroos. In the end, it finished as a cakewalk.

"It was a great performance, we only had two days together but the team spirit isn't built in two days it's built over the last however many years," midfielder Aaron Mooy said.

It is unlikely the Socceroos have had a worse build-up to a World Cup qualifier since joining the Asian Football Confederation in 2006 but showed the strength of their character by pulling apart China in such an emphatic fashion.

Goals for Awer Mabil, Martin Boyle and substitute Mitch Duke sealed the rout in Australia's first match of the final round of qualifying.

As one-sided as the contest was, the opening stanzas suggested it would be anything but for the Socceroos. China spent 12 days in camp and that familiarity gave them early confidence while their opponents were still adjusting. For the first 15 minutes, China was camped inside Australia's half where they dictated terms. By the end of the match, Australia looked like a cat toying with a mouse.

Midway through the first half, the Socceroos found their cohesion and rhythm. A string of quick passes opened space, unlocked the Chinese defence and gave the Socceroos a glimpse of goal. The first chances fell to midfielder Jackson Irvine who threatened from a distance and a set-piece before a quicker counter-attack unravelled the Chinese backline.

A clever long pass from Trent Sainsbury put Mabil through on goal, but he was denied an opener by a fine block from Chinese goalkeeper Yan Junling. Adam Taggart reacted quickly to a loose ball, crossing back across the goal to Mabil at the far post who prodded the ball over the line to put Australia into the lead. Two minutes later, Boyle doubled Australia's tally. A clever through ball from Tom Rogic gave Boyle room to advance on goal and the Scottish-born winger seized on some indecision in the Chinese defence, lashing a powerful shot past Junling into the corner of the net to make it 2-0.

Shell-shocked, China's early enthusiasm evaporated and it didn't return after the break, either. Instead, Australia should have sealed the win shortly after the restart. Their first chance of the second half fell to the giant frame of Harry Souttar who headed over the bar from a corner. Just after the hour mark, Taggart came close from an acute angle while Boyle fired straight into the arms of Junling from inside the box.

The Chinese goalkeeper seemed to offer the best of his team's resistance but appeared to be simply delaying the inevitable. With a defence so porous, Australia played their way through China with a fluid movement leading to a chance for Mabil inside the box. Junling got just enough to Mabil's curling effort to stop it trickling into the corner but couldn't do anything to prevent Duke's follow-up, the substitute tapping in for a goal with his first touch.

After that, China became clock watchers while the Socceroos were in preservation mode. They travel to Hanoi to face Vietnam next week, who lost 3-1 to Saudi Arabia. In the other group match, Oman pulled off a shock 1-0 win away to Japan.