The best games for PlayStation 5 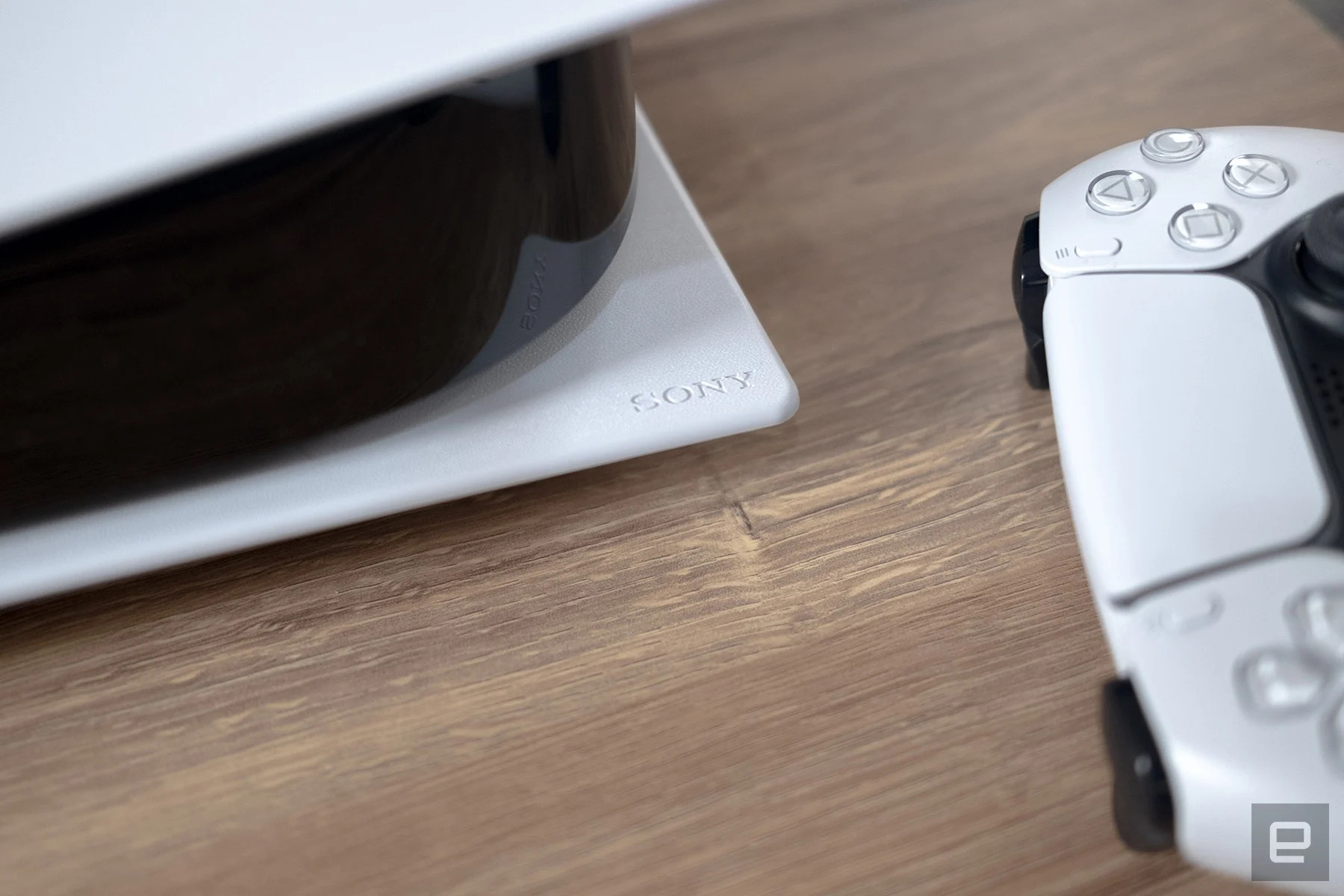 Welcome to the inaugural edition of our best games list for PlayStation 5. We've been running these lists quarterly since 2019, but it's only now that we feel the PS5 has a list of games strong enough to justify its own distinct page away from the PS4. That's not to say these games are all exclusive to the console — that really would be a shortlist — but we have looked for games that generally offer meaningful improvements over their last-gen counterparts when played on PS5. Usually, we'd take this opportunity to tell you what's new for this edition, but well, they all are. We'll be updating this periodically, so, if a game's just been released and you don't see it, chances are that the reason for its absence is that we haven't played through it yet. Either that or we hate it. 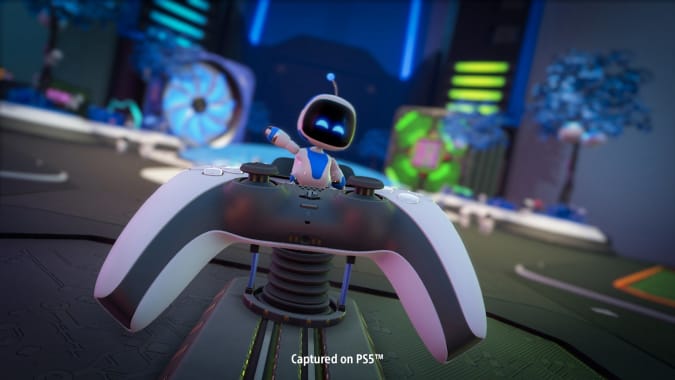 It’s odd to start a best games list with a title that comes free with the console, but if you’re anything like my son, who swiftly deleted Astro’s Playroom to make space for various Call of Duty titles, I’m here to tell you to give the pack-in title another shot. Astro’s Playroom is a love letter to both 3D platformers and the PlayStation itself. It’s also, to date, the title that makes the best use of Sony’s DualSense controller, with incredible haptic feedback and clever usage of the pad’s adaptive triggers. (Although, eight years on, I’m still not convinced anyone has found a compelling reason for that touchpad.) It’s a game that even completionists can finish within six hours or so, but those six hours were among the most fun I’ve had with the PS5 so far. 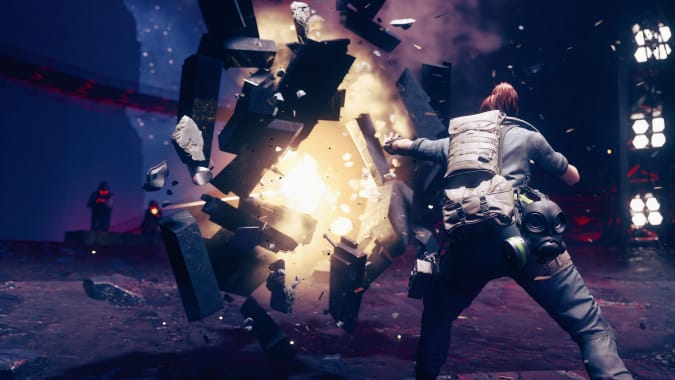 Control has been a mainstay of our best games lists since we started putting them together. Developer Remedy Entertainment took the weird Twin Peaks narrative of Alan Wake, smashed it together with Quantum Break's frenetic powers and gunplay, and got Control. The Ultimate Edition brings the smooth performance and ray tracing PC gamers got from Control to owners of next-gen consoles. (It also includes all of the DLC from the original release.) Short of a multi-thousand-dollar PC, it’s the best way to experience Remedy’s best game to date. 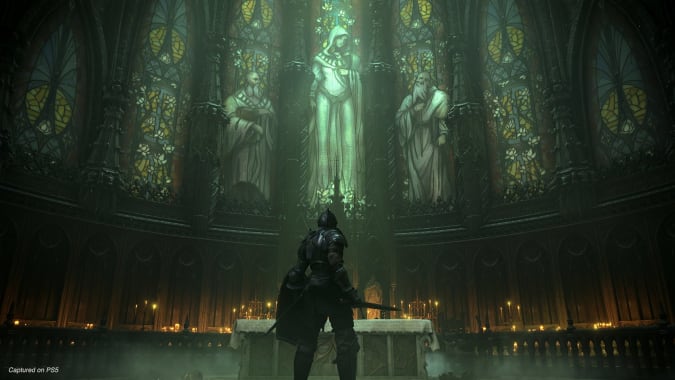 Bluepoint’s Demon’s Souls remake won’t be for everyone — no Souls game is. The original Demon’s Souls was a sleeper hit in 2009 on the PS3, establishing the basic formula that would later be cemented with Dark Souls, and then aped by an entire industry to the point where we now essentially have a “Soulslike'' genre. Today, that means challenging difficulty, grinding enemies for souls to level up, the retrieval of your corpse to collect said souls, a labyrinthine map to explore and, if you’re doing Soulslike right, some show-stopping boss fights to contend with. As a progenitor to the genre, Demon’s Souls has most of those in abundance. But rather than a huge sprawling map, it uses a portal system, with mini labyrinths to work through. Its bosses are also not quite on the level of impressiveness or difficulty of a more modern Dark Souls game.

Bluepoint has been faithful to the original, then, but graphically Demon’s Souls is a true showcase of what the PS5 can do, with gorgeous high-resolution visuals, smooth frame rates, and swift loading. While the graphics certainly catch your eye, it’s the smoothness and loading times that are the most impactful. The original ran at 720p, and… depending on what you were doing 25 to 30 fps, while the remake lets you pick between a locked 30 or 60 fps at 4K or 1440p. And in a game that will likely kill you hundreds of times, waiting two seconds to respawn instead of thirty is transformative. 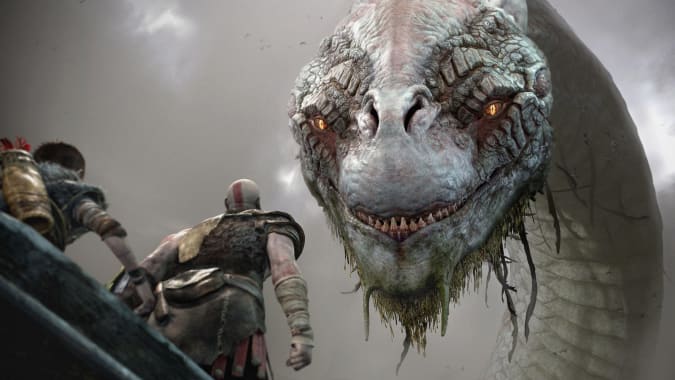 Sony's God of War series had laid dormant for half a decade when its latest incarnation hit stores in early 2018, and for good reason. Antiquated gameplay and troubling themes had made it an ill-fit for the modern gaming landscape. No more. SIE Santa Monica Studio's God of War manages to successfully reboot the series while turning the previous games' narrative weaknesses into its strengths. Kratos is now a dad, the camera is now essentially strapped to his shoulder and Sony has what is sure to become a new series on its hands.

The first outright PS4 game on this collection, God of War has at least been patched for better performance on PS5, allowing it to output at 4K/60. For those subscribed to PS Plus, this one’s available for free as part of the PlayStation Plus Collection on PS5. 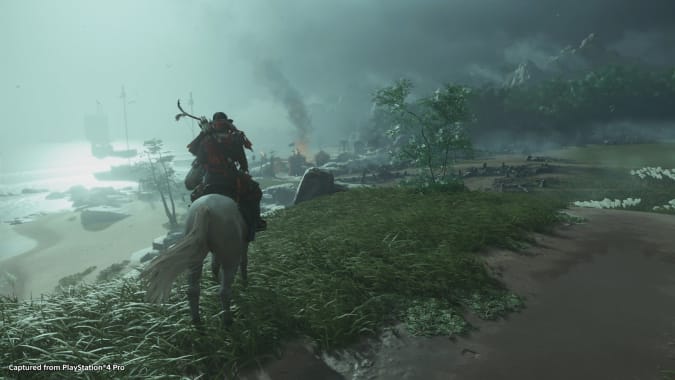 This tale of samurai vengeance is like Japanese cinema come to life. There are multiple betrayals, the sad deaths of several close allies, tense sword fights, villages and castles under siege, and even a ‘Kurosawa mode’ black-and-white filter you employ for the entire game. The world of feudal Japan, with some creative liberties, is gorgeous, with fields of grass and bullrushes to race through on your faithful steed, temple ‘puzzles’ to navigate around and fortresses to assess and attack.

As you make your way through the main story quest, and more than enough side quests and challenges, you unlock more powerful sword techniques and stances, as well as new weapons and forbidden techniques that are neatly woven in the story of a samurai, pushed to the edge. It still suffers from one too many fetch quests, artifacts scattered across Japan’s prefectures, but the sheer beauty of Ghost of Tsushima tricks you into believing this is the greatest open-world game on PlayStation. Don’t get me wrong — it’s up there.

Like God of War, there’s not a fancy graphical upgrade from the PS4 version here, but it has been patched to both 60 frames per second and the highest resolution possible, doing away with the either/or PS4 Pro users had to choose between. Given how much the game looks and feels like a tribute to Japanese cinematic auteurs of the past, you could say you’d be playing the game as the creators intended you to. 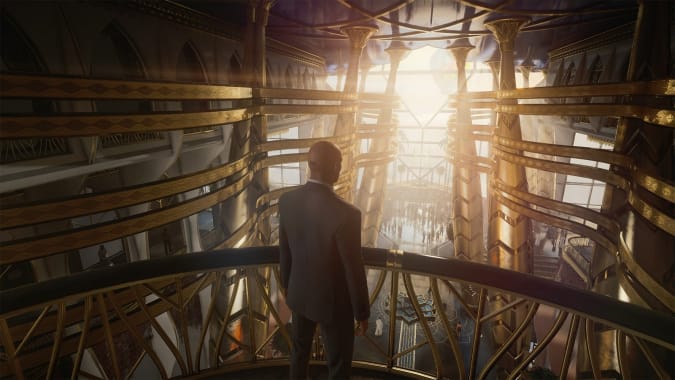 We’ll admit it. We’re late for the party. Since 2016’s Hitman, IO Interactive has offered intricately laid out levels like playgrounds for the eponymous contract killer, Agent 47. Hitman 3, though, does it the best, with some of the prettiest sandbox levels you’ll ever see, with lots of detail and points of interest.

On the PS5, the game supports HDR, 4K, and 60 fps as well as speedier level loading, but what marks this version out is additional PlayStation VR support and the utilization of Sony’s DualSense controller. Adaptive triggers push back depending on your gun, as does the haptic response when you eventually pull said trigger. That said, this isn’t a shooting game, though you can shoot if your plan doesn’t quite work out. The rebooted Hitman series is more about scoping out the environment, planning your takedowns, pulling them off, and fleeing the scene. When you do everything right, you can calmly walk away from a mission with no one even knowing you’ve killed the mark.

Each mission isn’t overly long, but they are all built to be played again and again. Every time you complete a mission (with varying degrees of success) you unlock new starting locations, weapons to stash, and more opportunities for even more elaborate kills. The Hitman series explicitly rewards replay, and it’s incredibly addictive. You can even carry over levels and data from Hitman 2, and play with nearly all of the above features. If this is your first game in the series, your Hitman journey has only just begun. 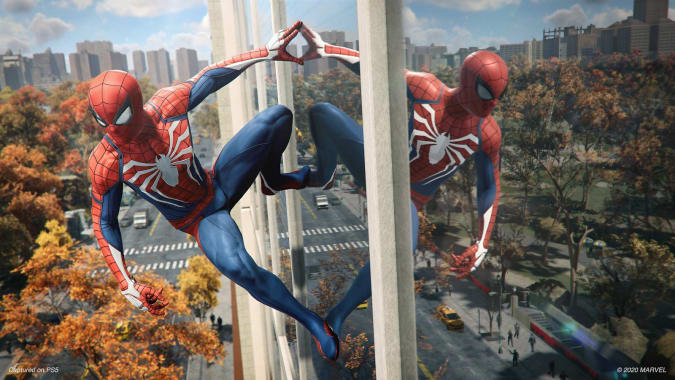 Finally, you don't have to pick up Spider-Man 2 on the GameCube to get your web-slinging fix anymore. For almost 15 years, that game was held as the gold standard for a Spider-Man game, and I'll let you into a secret: It wasn't actually that good. Marvel's Spider-Man, on the other hand, is a tour de force. Featuring the best representation of what it's like to swing through New York City, well, ever, Insomniac's PlayStation exclusive also borrows liberally from the Batman: Arkham series' combat and throws in a story that, although it takes a while to get going, ends up in a jaw-dropping place.

With the launch of the PS5, Insomniac released a Miles Morales spin-off game, which follows the eponymous character as he attempts to protect NYC in Peter Parker’s absence. Both parts are available packaged together as Spider-Man Ultimate Edition— it has a longer name than that but let's not — and benefit from improved framerates, resolution, and ray tracing (although not necessarily all at the same time!) With the full graphical package enabled, you’ll be playing at 30 frames per second in 4K, or you can pick between a pair of performance options: 4K/60 with no ray tracing, or 1080p/60 with ray-tracing. Whatever mode you pick, you’ll benefit from loading times that finally make the game’s fast travel system… fast. 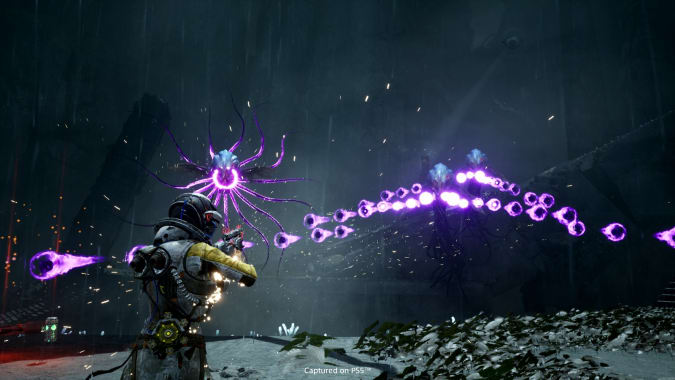 Returnal is a third-person action game, a roguelite, a bullet-hell shooter, and very hard, perhaps not in that order. The setup is basically that you’re stuck in a death loop, but you’re aware of it and must learn the patterns and weaknesses of enemies — and master your own — in order to progress. As Devindra Hardwar explains, it leans heavily on the dark sci-fi of Alien, Edge of Tomorrow, and Event Horizon but makes something new and unique in the process.

It’s made by the team behind Resogun, Nex Machina, and Super Stardust HD, and you can tell, for better or worse. As you’d expect from a team that’s spent the past decades making shooters, the movement, gunplay, and enemy attack patterns are incredibly well-tuned. But on the flip side, from a studio used to smaller productions, the complexity and ambition of Returnal leads to a lack of polish that some may find unacceptable in a $70 game. If you can look past that, there’s a hell of a game waiting for you here. 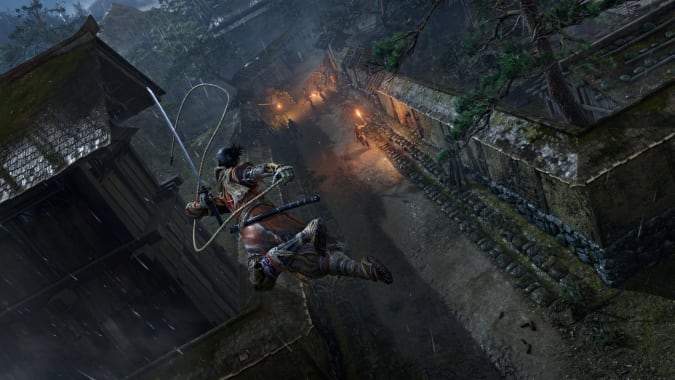 Sekiro: Shadows Die Twice isn't just another Dark Souls game. FromSoftware's samurai adventure is a departure from that well-established formula, replacing slow, weighty combat and gothic despair for stealth, grappling hooks, and swift swordplay. Oh, and while it's still a difficult game, it's a lot more accessible than Souls games — you can even pause it! The result of all these changes is something that's still instantly recognizable as a FromSoftware title, but it's its own thing, and it's very good. While the game has yet to receive a proper PS5 upgrade, the extra grunt of Sony’s next-gen console does allow the game to finally run at a locked 60fps — something the PS4 Pro couldn’t handle.