More than 90 percent of Australians live at the green edge, where the climate is relatively benign; less than 10 percent live in the bush, the dry interior of the deserted centre.

The latter experience two interrelated conditions: relentless heat and a lack of water, but fortunately there is a physics principle that uses one to overcome the other: evaporative cooling.

This process relies on the principle that when water is evaporated it uses energy, which lowers the surrounding temperature. When a breeze passes over water, particularly when it is suspended in, say, a cloth, the air temperature goes down whilst the humidity goes up (which is not an issue in very dry or low humidity climates).

Scientifically, it’s the latent heat of evaporation. Experientially, it’s our bodies feeling cooler on a hot day when we are in a breeze or under a ceiling fan as the skin moisture evaporates (remembering the politically incorrect 19th C terms: ‘women glow, men perspire, and horses sweat’).

The water has to come from somewhere for evaporation to occur. The drier the climate, the greater the need for evaporative cooling, but also the scarcer the water, a central conundrum.

According to Thomas Mitchell, Surveyor-General in the 1830s and 40s, aborigines carried water in kangaroo skins, and some water would seep through and cool the remaining water. No doubt Bruce Pascoe will find other sources to confirm this, increasing our growing appreciation of indigenous design ingenuity.

Mitchell tried to emulate the process using a canvas bag, greased with tallow to make it waterproof but the tallow tainted the water. Reverting to plain canvas, he discovered a unique and useful property: canvas expanded when wet so it could hold water, but also leaked some water to the outside, where it has evaporated and cooled the contents. The water bag worked best when in a breeze and became the norm for early explorers and settlers in the dry interior.

When gold was discovered in Coolgardie in 1892, the town developed rapidly, becoming a municipality in 1894. The population of 15,000 in 1898 made it the third largest town in WA after Perth and Fremantle, and it became the capital of the West Australian Goldfields before being overtaken by Kalgoorlie Boulder. 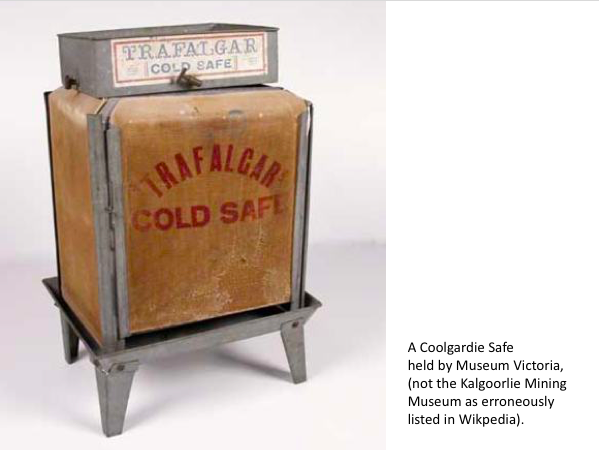 Its remoteness, 180 kilometres from the nearest civilization, meant that food supplies were expensive, scarce, and easily spoiled. In the late 1890s a contractor, Arthur Patrick McCormick (known as Paddy) adapted the water bag system into a form of refrigeration, creating a ‘safe’ (as he called it) where the food was stored in an open box, surrounded by hessian standing in a pool of water wicking up through capillary action. Air passing over the wet hessian was cooled, thereby keeping the contents cool.

Efficiency was increased with strips of flannel in a tray above to encourage water to drip down the side of the hessian bag. The ‘Coolgardie Safe’ was born; it worked exceptionally well and homemade versions were rapidly developed before commercial versions became available, allowing McCormick to profit from his invention, even though most of the prospectors in Coolgardie copied or adapted the design themselves. 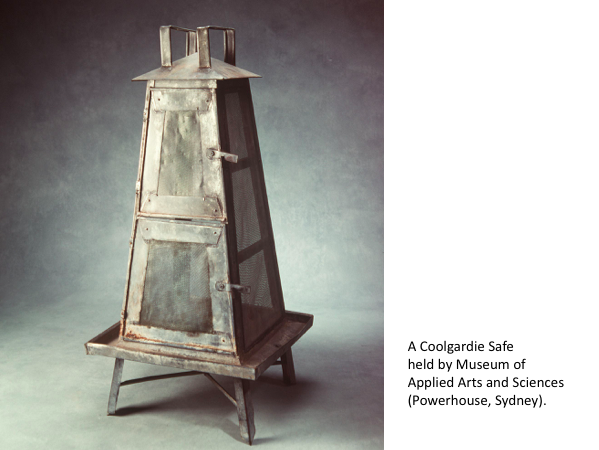 McCormick later became mayor of Coolgardie (according to MAAS, the Museum of Applied Arts and Science) or the mayor of Narrogin, southwest of Perth (according to Museum Victoria). Sadly, there’s no definitive work, yet, on ‘Paddy’ McCormick's life and invention.

The Coolgardie Safe relies on water, which is scarce in the outback. The solution in Coolgardie, as elsewhere, was to draw saltwater from the ground, heat it to steam which could then be condensed and cooled in tall cylinders and collected in catchment trays to produce fresh water. By 1898, there were six companies supplying condensed water to the goldfields, the largest one producing 450,000 litres of water a day.

The Coolgardie safe made its way onto the veranda in every farm in a dry area, as well as urban areas where it was commonly placed outside to catch the breeze. It was an integral part of our respect and design for water: reducing valves on showers, water tanks, windmill pumps, recycling greywater, closing irrigation channels, and so on. 15 years ago, some 25% of all inventions submitted the ABC’s New Inventors were about saving water.

The Politics of Water

But this respect for water in Australia's dry interior seems to have deserted our politicians recently; the National Party of that other McCormack, Barnaby, and Barilaro (and the proto-National Joel Fitzgibbon) promote coal production and prefer coal seam gas to the protection of aquifers for farmers, support the wholesale removal of trees which store water and give shade, and are all-round antithetical to water.

We need more inventors following in McCormick's footsteps, with more inventions that cleverly use water in our dry States, to both save water and better use this precious resource. Keeping cool as the climate warms is a primary concern, and the evaporative cooler on the roof will become ever more common.