‘Waiting for a ghost’: the search for dark matter 1km under an Australian town 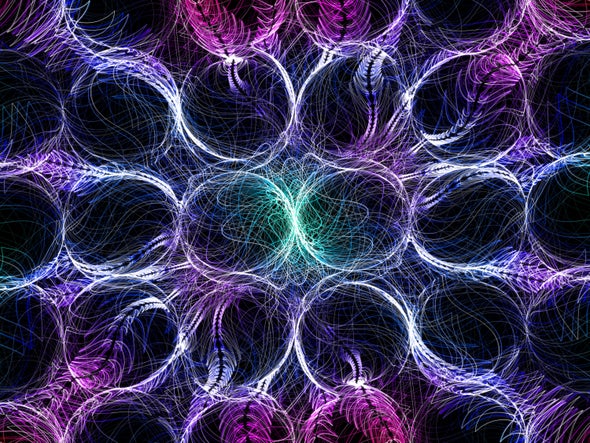 Dark matter is flowing through you, right now.

This mysterious, invisible stuff makes up more than 80% of the universe, an elusive web of particles that pass freely through matter. To observe it, you have to get rid of all the interference.

That’s what the Australian Research Council’s centre of excellence for dark matter particle physics is doing a kilometre underground, in a disused goldmine under the town of Stawell in regional Victoria.

There, a cavern is being transformed into a lab for dark matter hunters, and it is on track to be finished by the end of the year.

Swinburne University astronomer Alan Duffy, the director of the space technology and industry institute, describes dark matter as a “ghost”.

“Dark matter is a cloud that surrounds us … it flies through us, through solid walls, through the Earth,” he says, likening it to the wind that is seen only through its effects.

“It forms enormous universe-spanning structures, cosmic webs, and the galaxies we can see and live within lie along dark matter filaments like morning dew on a spider’s web in the backyard.

“As you read this, you’ll be experiencing a few hundred million particles per second, of which may be a couple will actually collide with your atoms over the course of a day.”

The vast majority of the particles pass through you, with just a couple of unlucky ones glancing off one of your atoms.

That’s why you need radio silence to spot them.

The centre’s chief investigator, Phillip Urquijo, says while more than 80% of the mass of the universe is made of dark matter, it is only visible through its interactions with other matter – its gravitational effect.

And observing that means blocking out interference from other particles. Radiation from the sun, and from the radioactive decay of ordinary matter, and from radioactive particles that have infected metals since the first atomic bombs were set off (more on that later) all mess with the picture.

At the lab, there are 1,000 metres of rock between the researchers and the surface, slabs of rock to block cosmic rays. But wait – there’s more.

“We put the experiment deep underground, as deep as we could in Australia, in one of the first operating goldmines,” Urquijo says. “We can block out the sun’s cosmic rays, but the rock and any material that we use in the construction of the experiment can contain naturally occurring radioactivity.”

The cavern is covered with a net and sprayed over with a type of concrete. Then there’s the search for pure metal.

The leftover sprinkles of radioactive dust from atomic bombs have infected metals since the second world war, meaning many people trying to detect dark matter have to source metals from before the bombs were set off. From ancient shipwrecks, for example.

“When you produce steel, you have a combination of new steel from iron ore and recycled iron. Steel produced during and since the second world war … a lot of steel ended up with a component of radioactivity that was remnants from weapons testing,” Urquijo says. “One option is salvaging ships, ancient Roman ships and sunken submarines from a long time ago that have been sitting at the bottom of the ocean, where cosmic rays haven’t penetrated.”

Related: Dark matter: one last push to crack the biggest secret in the universe

That’s what many dark matter hunters have had to do – but Urquijo says they’ve managed to source a purer version of steel, and Duffy says they’ve put in some safeguards.

Duffy, who is also a chief investigator on the project, says, unlike other projects that have salvaged lead ingots from 2000-year-old sunken Roman galleys, they’ve set up a “veto system”.

The team created the purest crystals possible, sodium iodide crystals with lower levels of any kind of contamination than any produced before.

Those pure crystals that will glow when a particle hits them are kept in copper tubes, inside a steel vessel, surrounded by a special liquid that will also glow when it is struck by a particle (it’s called a scintillator liquid).

“We’re now looking in two places for this flash of light,” he says.

“If the crystal glows, we look at the liquid around it, and if the liquid has also flashed, we know it can’t be dark matter, because the chances the dark matter has hit atoms twice is infinitesimally small.”

Think of those millions of particles flowing through you right now, and how rarely one pings off an atom. A different particle is likely to hit the water than that pure, compact crystal. Two flashes. The wily dark matter particle though is so unlikely to hit anything that there will be only one flash.

For decades, dark matter hunters looked outwards at the behaviour of galaxies, at how light bends and used space telescopes to track evidence of its existence. As that evidence grew, so did the realisation that dark matter is all around us, so it could be studied on Earth.

Sign up to receive an email with the top stories from Guardian Australia every morning
The Stawell project is part of the Sodium Iodide with Active Background Rejection Experiment (Sabre), which is trying to detect dark matter particles directly, as opposed to observing it indirectly through its effects. It’s the southern hemisphere partner to a similar set-up in Italy.

Duffy says once we know more about dark matter, there’ll be technological spinoffs and spillovers – in the same way, that learning how to split the atom gave us nuclear medicine (and the undesirable weapons that have so contaminated everything on the planet).

There’s also the not-insignificant role of dark matter in ensuring that galaxies – and by extension, us – exist at all. There must be something out there that provides the gravity that allowed galaxies to form, and that still stops them from flying apart.

“You can create a universe in a supercomputer – which is what I do,” he says. “If you don’t put dark matter in there there isn’t enough gravity for the galaxies to form. We owe our very existence to the dark matter.

“It’s a big question about our universe that we want to answer, it was produced in the earliest moments of our universe, and it’s critical to our understanding of fundamental physics.”

So the dark matter hunters keep hunting, with the Hubble space telescope, the large hadron collider, and a lab a kilometre under the Victorian countryside in an old goldmine.

It is expected to be up and running in the new year. Then, Duffy says, “We wait for a ghost”.