Since ancient times, humans have built walls to safeguard their homes and communities from attack. While many famous fortified cities such as Jericho and Troy have crumbled over time, plenty of characterful towns and cities with their age-old walls intact remain. From hilltop citadels to fortified coastal enclaves, we scour the world to find some of the most beautiful. 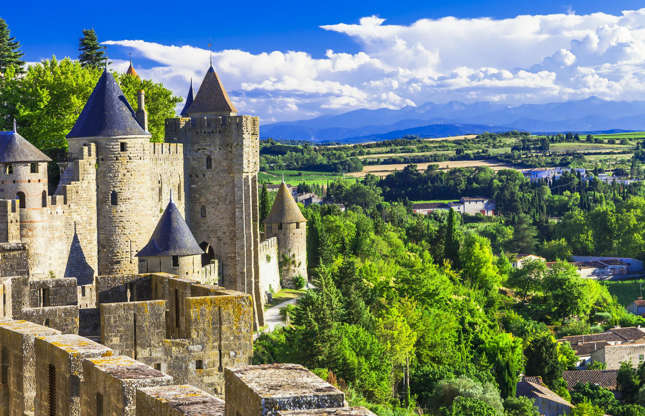 This handsome hilltop city on the banks of the River Aude in France’s Languedoc region is the largest walled medieval city in Europe. Built on Roman remains, the Cité de Carcassonne (old town) is encircled by two outer walls that loom over the narrow alleyways and hidden corners within. With 52 towers and barbicans, the walls were highly innovative at the time and designed to prevent attack by siege engines. They were restored in the 19th century by architect Eugène Viollet-le-Duc so look remarkably pristine. A circuit walk now loops around the battlements. 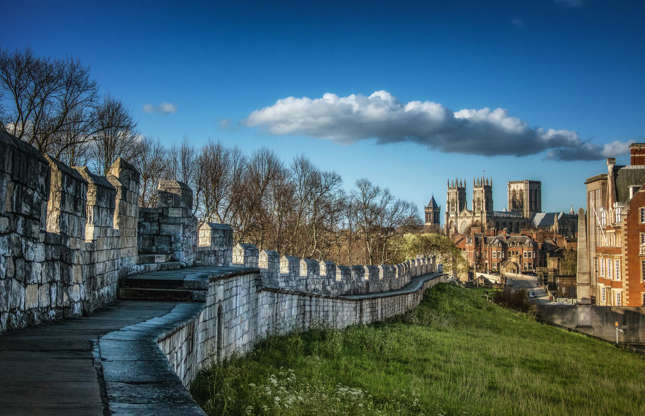 Heaving with historic nooks and crannies, York has the longest medieval town walls in England at 2.1 miles (3.4km) long. They mainly date from the 13th century but were built on far older defences. The Romans first built walls here, which the Vikings later covered in earth and topped with a palisade (fence of pointed wooden stakes). It's possible to walk all around the walls, passing fascinating details such as arrow slits, musket loops, sculptures, and masons' marks. Four main ‘bars’ (or fortified gateways) allowed entry into the old city, as well as two lesser bars and a postern (a small gateway defended by a tower). The wall walk is currently one-way only due to COVID-19 restrictions. 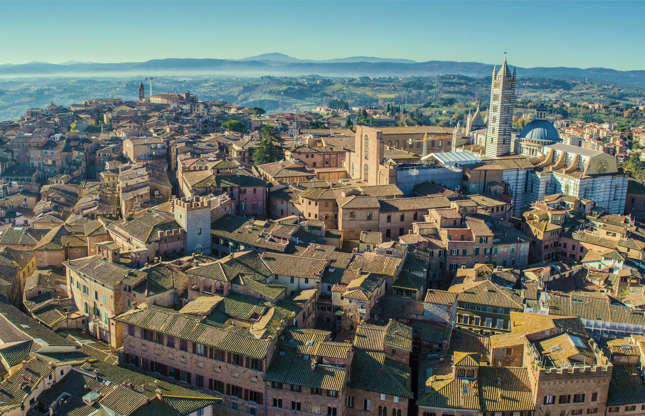 Built across three rolling hills, the scenic walled city of Siena in southern Tuscany was a centre of medieval banking and a great rival to Florence in the Middle Ages. The 4.4-mile-long (7km) fortified walls, punctuated with bastions, towers and gates, still follow the contours of the hill and entomb its historic core. Inside the defensive strongholds lie Siena's many architectural treasures: the Piazza del Campo (venue for the twice-yearly horse race Palio di Siena), the striking striped Duomo, and Torre del Magia among them. 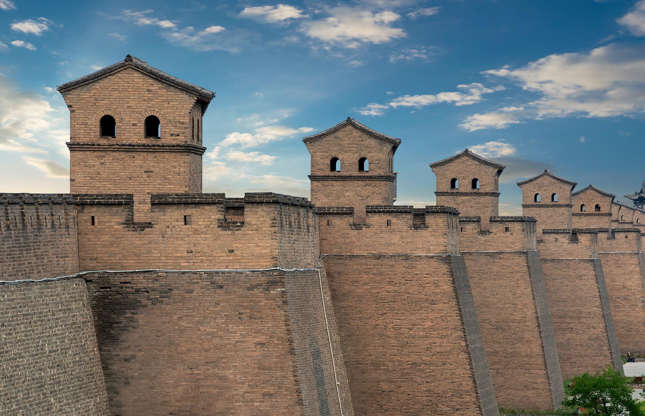 Pingyao in Shanxi province is one of China’s most remarkable ancient cities and now a UNESCO World Heritage site. The wealthy trading centre and once-powerful financial centre (as the home to China's first banks), is famed for its commanding and intact walls, old courtyard houses, and temples. The walls were first built during the reign of King Xuan (827–782 BC) of the Western Zhou Dynasty and later rebuilt in the 14th century. There are 72 observation towers and more than 300 battlements, although only one of the four original corner grand watchtowers, the Great Scholar Tower, remains. 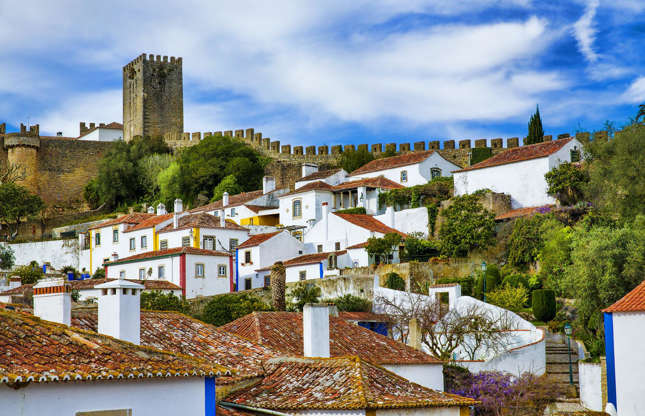 Hugged by castellated medieval walls, hilltop Óbidos is one of Portugal’s prettiest towns. Given as a wedding present by King Dinis to Isabel of Aragon in 1282, the citadel is filled with little churches, white-washed homes (adorned with flower-filled window boxes), and a maze of narrow cobbled alleys. Dating from the 14th century, much of the original walls remain and can be walked along via a narrow walkway. The town is dominated by the 12th-century castle, which is the setting for a delightful pousada (inn). 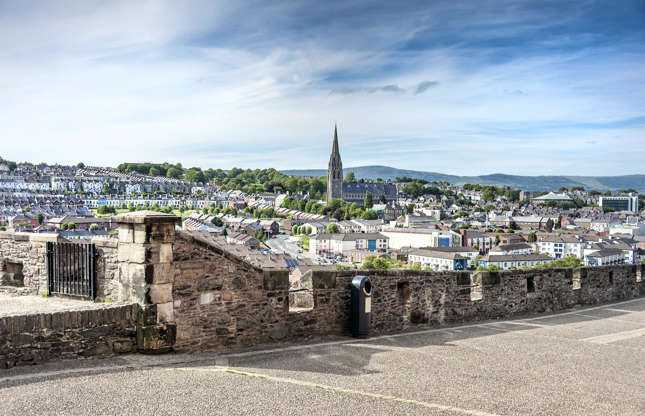 Londonderry is the only completely walled city on the island of Ireland. Its defensive walls were constructed between 1613 and 1618 as defences to protect settlers from England and Scotland. At around a mile (1.5km) in circumference, the circuit around the 400-year-old walls is now one of the city’s chief attractions. An impressive collection of cannons line the walls, which can be up to 35-foot-wide (11m) at points. They include four original gates into the city – Bishop’s Gate, Ferryquay Gate, Butcher Gate, and Shipquay Gate – along with three later additions. 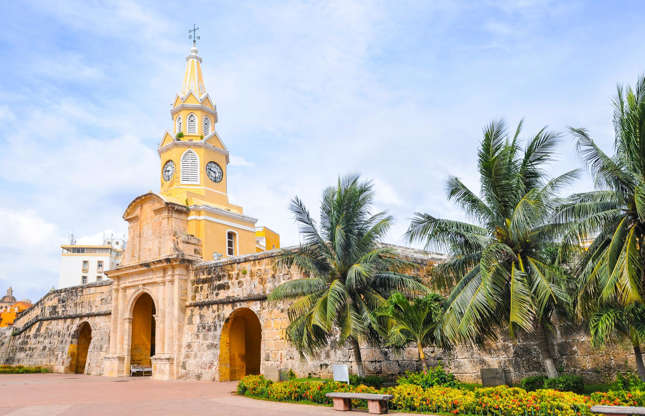 Constructed to ward off incessant pirate attacks, the walls and fortresses of Cartagena are among the best-preserved fortifications in South America. The ambitious defensive system was first implemented in 1614 when the prosperous Caribbean port, known as Cartagena de Indias, was under Spanish rule. King Philip III famously ordered them after an attack by British privateer and explorer Sir Francis Drake, but the defence project went on until 1796. At around seven miles (11km) in length, the historical centre’s walls have since served as a defence against coastal storms and flooding. 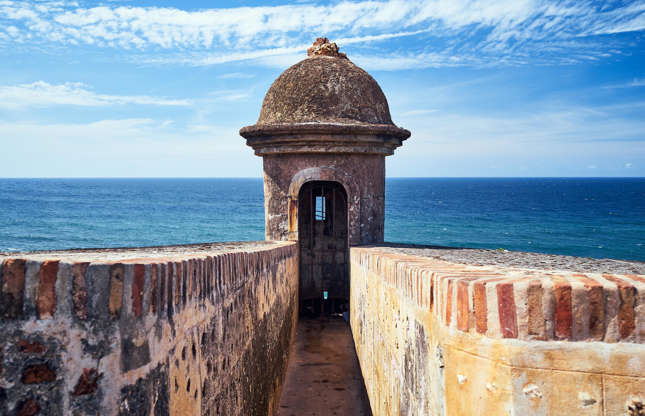 The awe-inspiring walls that protect San Juan’s Old Town were constructed mostly by enslaved people. Work began on the formidable fortifications in 1630 when Spanish colonialists wanted to protect the port from pirates and enemy forces. The grueling construction continued for some 150 years. While San Juan has sprawled well beyond the walls, the defences remain in good condition as do the old town’s mighty forts. El Morro and Castillo de San Cristobal, overlooking San Juan Bay, were also key to the port's protection and are characterised by bastions and circular sentry posts called garitas (pictured). 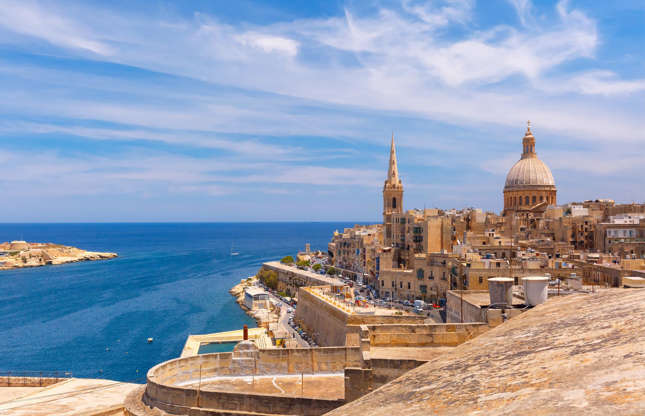 After the Great Siege of 1565, Malta’s diminutive capital needed formidable defences to ward off attacks from the Ottoman Turks.  The magnificent walls that rise up from its harbour were constructed in the 16th and 17th century and still impress with their scale and ambition. Today Valletta, with its fortified harbour, honey-coloured 16th-century buildings, and cobblestone streets, enjoys the protection of UNESCO World Heritage status. 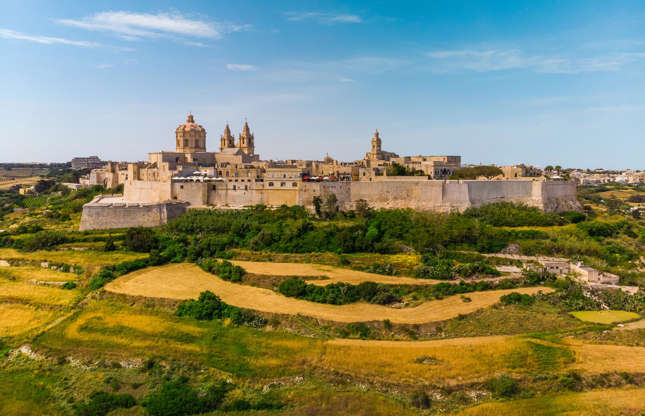 Another fine example of a walled city lies to the north of Malta. Former capital Mdina sits perched on a plateau and is hidden behind thick fortifications. Known as the Silent City, it was founded by the Phoenicians and there's evidence that walls circled the settlement as far back as 1,000 BC. Today it's a place of great beauty and culture with a mix of medieval and baroque architecture, tangle of narrow alleys, and grand palaces that remain home to wealthy Maltese families. 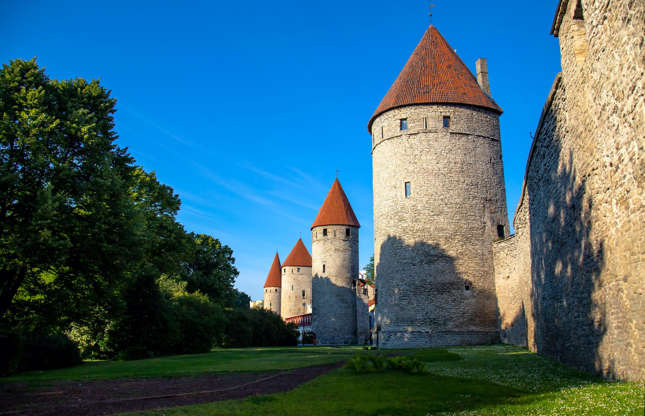 The tiny old town of Tallinn, protected for centuries by its practical yet pretty fortifications with fairy-tale towers, remains almost perfectly preserved. Inside the walls (much of which are still standing) lies a labyrinthine network of narrow cobbled passages, squares, and timbered merchant houses dating back to the 13th century. Set on the Baltic coast, Estonia’s capital was a thriving Hanseatic trading centre during the Middle Ages. 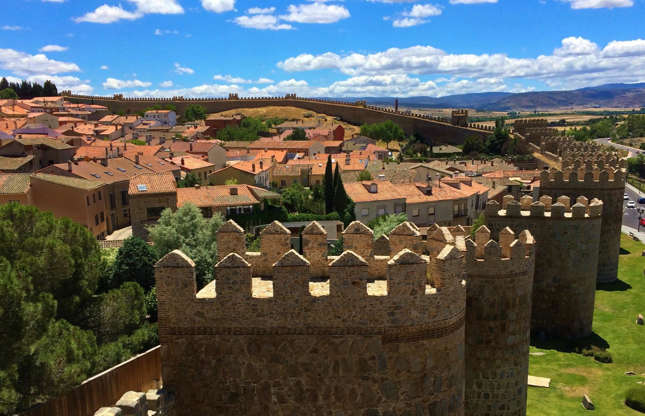 The mighty walls of Ávila were built as part of a large-scale defence system against the Moors in central Spain. All turrets and towers, these impressively preserved medieval walls run 8,202 feet (2,516m) around the city's old centre – designed to enclose and protect the Christian population. The walls have 87 turrets and nine main gates, plus two smaller ones. As the birthplace of St Teresa and burial place of the Grand Inquisitor, Torquemada, the city in Castile and León still has great religious significance. 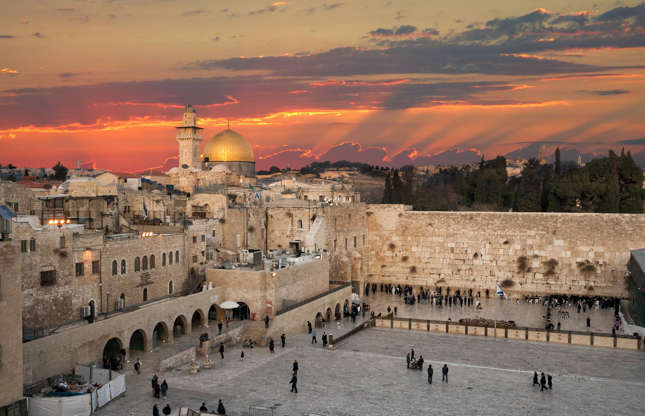 The marvels inside the old city of Jerusalem are one thing, but the walls that encircle its many historic and spiritual treasures are also magnificent. Fittingly, they were built by the Ottoman ruler known as Sultan Suleiman the Magnificent in the 16th century to defend their position in the fiercely contested city. The fortifications have seven gates, the best known being the Jaffa Gate. It’s now possible to see the old city from above by taking the narrow ramparts walk – there’s one on the south and north side. 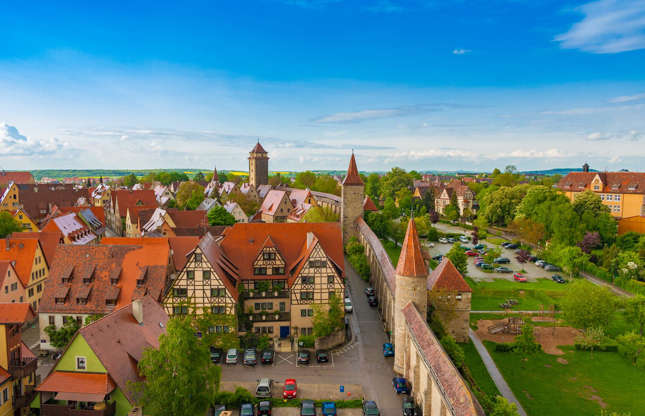 Walking the walls that wrap around Rothenburg-ob-der-Tauber is a top attraction of this picture-perfect town in Bavaria, with its half-timbered houses and grand medieval town hall. Situated on the scenic ‘Romantic Road’, the town developed around its fortress and became a powerful city – it had the coveted status of being an autonomous imperial city, or Reichsstadt, from 1274 until 1803. The town’s intact walls with their many towers and fortified gates are among the finest in Germany. 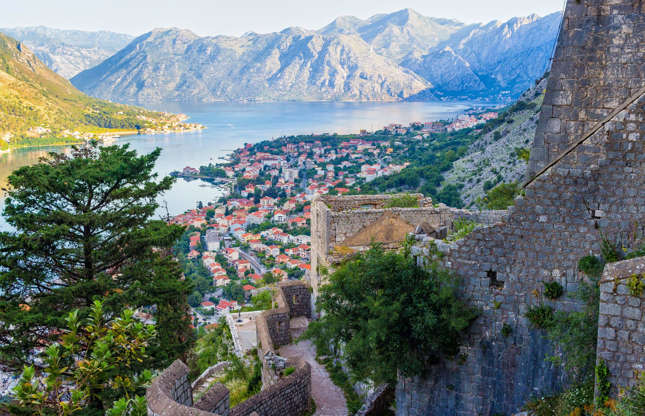 Tumbling down a steep mountain to Kotor Bay, the old city of Kotor is one of the Adriatic’s most captivating sights. Its ancient stone churches, Venetian villas, piazzas, and monasteries remain encircled by protective medieval walls. These 2.7-mile (4.5km) fortifications, which rise from the sea and go up high to the fortress of San Giovanni, have certainly seen some action. Originally built by the Byzantines and later added to by the Venetians in the 17th and 18th century, they’ve withstood invasions, pirate attacks, and earthquakes.