Supermarket giant Woolworths has responded to the push by many shoppers for faster online deliveries, striking a deal with Uber Eats for groceries and fresh fruit and vegetables to be delivered from some of its Woolworths Metro outlets within an hour.

Woolworths is starting a trial today for Uber Eats drivers to deliver goods ordered from 12 Woolworths Metro stores in Sydney and Melbourne. It aims to roll out the service to about 200 Woolworths outlets by early next year. 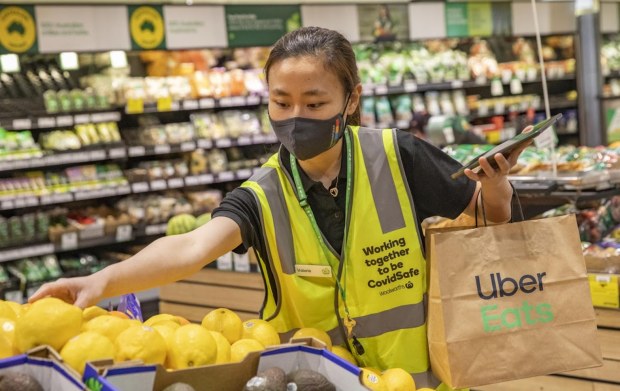 The Woolworths Metro stores will offer a one-hour delivery service via Uber Eats.

Woolworths operates 996 large supermarket outlets and 78 Woolworths Metro stores, which have a smaller footprint and are generally positioned in inner-city locations to capture customers and commuters buying smaller amounts of groceries, but more frequently. But the Woolworths Metro format has suffered in the pandemic as more people worked from home and CBDs emptied out. Woolworths in June booked a $50 million write-down on the value of 13 Metro locations located in CBDs or near major train stations, which have borne the brunt of the work-from-home shift.

“We see it as complementing the current offer,” Mr. Nolan said.

But the rapid delivery window would be appealing to many online shoppers.

“We think that speed and reliability are what our customers are asking us for,” he said.

There would be 1200 different products available to shoppers of Woolworths Metro via the Uber Eats app, Mr. Nolan said.

It would include many grocery staples and fresh fruit and vegetables, along with ready-to-eat meals.

Lucas Groeneveld, the Uber Eats regional general manager retail in Australasia, said it would work in a similar way to how people ordered from restaurants to be delivered by Uber Eats drivers. The payment system would be the same way.

He said in the lockdowns in Sydney and Melbourne there had been a renewed jump in demand generally for Uber Eats services. “There has been a spike across the brand,” “he said. “The consumer demand is definitely there,” he said.

Woolworths Metro stores in the Melbourne suburbs of Balaclava, Hadfield, and Hawthorn will be the first to offer the service from today in the southern capital.

In Sydney, the stores are at Bondi, Maroubra Beach, Padstow, Park Sydney at Erskineville, Pyrmont, Randwick, Redfern, Rose Bay, and Rozelle. The grocery orders will be packed by Woolworths staff before being handed on to an Uber Eats driver for delivery.

Woolworths has an existing relationship with the parent company Uber, where drivers are helping to deliver bigger online supermarket orders. Taxi drivers who are part of the 13cabs network operated by ASX-listed A2B Ltd, are also part of the delivery service. A2B set up the 13things arm in early 2020, which accelerated fast through the agreement with Woolworths.